Image from the book and upcoming photo exposition "In the Centennial Footsteps of the Great War."

"It is we who have had the privilege of talking to survivors of the First World War that must now keep the memory of the Great War alive."

An interesting new World War I-themed photo book project will come out later this year. The 640-page book, entitled "„In the Centennial Footsteps of the Great War“, the book will be a tribute to the centennial of the First World War, done through contemporary imagery. We spoke to the book project's author, Attila Szalay-Berzeviczy, about the book's photography, and the book's aims. Attila has an interesting background -- he is an economist, a photographer, the founder of Historical Military Photos Ltd, and the former President of the Budapest Stock Exchange.

Tell us all about this interesting book project. 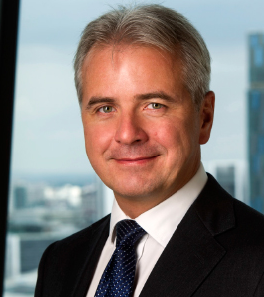 Attila Szalay BerzeviczyEver since I was a young boy I’ve enjoyed exploring military history. Growing up in a Hungary occupied by the Soviet Union, I learned a lot at school about how the Red Army “liberated” Central and Eastern Europe from Nazi Germany. I also heard the stories about my grandfathers, who both served on the Eastern Front during the Second World War as officers in the Hungarian Army, fighting on the side of Germany.

But we never heard anything about the First World War. It was simply not part of any private or public discussion, despite the fact that Hungary had played a major role and had perhaps lost more than any other nation as a result of the war. Pushed by Austria and Germany into the conflict, Hungary was obliged to fight from 28 July 1914 until 4 November 1918 on four different fronts. In hostilities against Russia in Galicia, Romania in Transylvania, Serbia in the Balkans and Italy in the Isonzo Valley, over 600,000 Hungarian soldiers were killed out of a population of barely 13 million.

The Paris Peace Conference meted out an incredibly harsh post-war punishment on Hungary. Only when I grew up and started to be more interested in Europe’s tragic 20th century did I realize that the First World War had in fact played a much more pivotal and complex role in shaping the world than the Second World War.

I became even more interested to learn about the 1914–1918 period when I discovered that my great-great-grandfather, Albert Berzeviczy – who during the war was the president of the Hungarian Academy of Science, as well being as a close friend of Prime Minister Istvan Tisza and loyal supporter of Kaiser Franz Joseph – strongly and publicly opposed the declaration of war on Serbia, as he feared that it would only lead to the disintegration of the Dual Monarchy that he very much loved.

In 2013, I moved from Budapest to Vienna, which made me even more motivated to delve into the causes of the fall of the Austro-Hungarian Empire. From this point on, I was inspired to contribute in some way to the commemorations of the approaching centennial of the First World War. As a photographer, I knew that nothing expresses itself quite like a finely crafted photography book. So, after a little thought, in April 2014 I launched the “In the Centennial Footsteps of the Great War” book project. 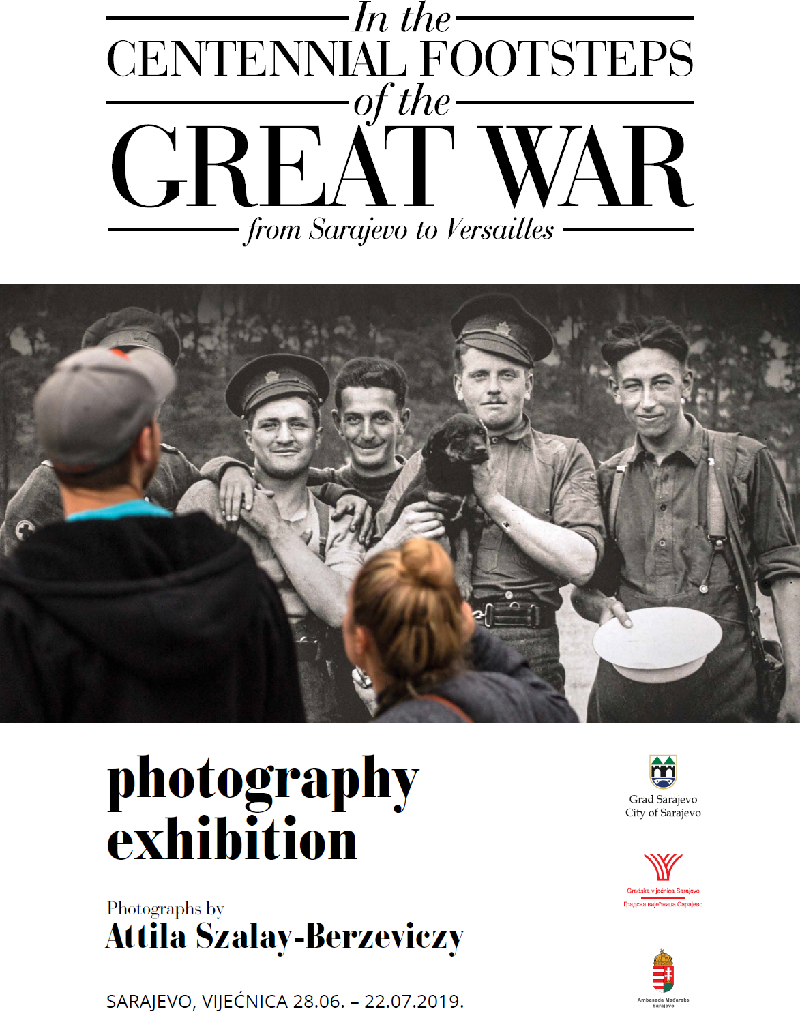 The devastating events of the First World War were captured at the time in myriad photographs. Since then, tens of thousands of books with black-and-white photographs depicting the carnage of the war have been published. I thus decided to work on a book that is not only very different from anything that has been published before in terms of its content, but also includes something unique and unrepeatable: this book chronicles and explains the historical events and the horrors of the First World War through photos that were taken exactly 100 years later, between 2014 and 2018, in each and every theatre of the war, from the Latin Bridge of Sarajevo, through the battlefields of Europe, Africa, the Middle East and the Pacific, all the way to Versailles, covering all together 59 different countries.

To achieve this goal, in 2014, I embarked on a five-year-long battlefield-to-battlefield journey, mirroring the events of war as they unfolded exactly 100 years earlier. Following the footsteps of the Great War, armed not with a rifle but with my Nikon D4 and D5 cameras, I set about photographing the centennial commemorations, the war memorials, the monuments, the military cemeteries and the battle re-enactments marking the progression of the war. Each trip was carefully planned and thoroughly researched using the Internet and a library of books, which meant that I always arrived at each destination with a list of images I was hoping to find, to be accompanied by any other images that might present themselves during my visits.

Tell us about your travels

During this deeply personal journey, I traveled tens of thousands of miles – by airplane, by car, by ship, and on foot – spanning the whole theatre of this truly global war, going to places I otherwise would never have thought to visit but which proved to be simply amazing: the Mazurian Lakes in Poland, Madain Salih in Saudi Arabia, the Island of Heligoland in Germany, Lake Narach in Belarus, the mountains of Albania and Macedonia, the Falkland Islands, and the northern tip of Mozambique. I fell in love with Ypres, with Lviv and with Sarajevo; I enjoyed every minute I spent in Amiens, Arras, Bardejov, Belgrade, Bitola, Bucharest, Canakkale, Cortina, Dixmude, Doiran, Kobarid, Mulhous, Gizycko, Prizren, Przemysl, Reims and Verdun, the towns which became my base camps to explore countless battlefields and other places of historical significance.

Have you experienced any negativities during your project?

Indeed, my journey was not always easy or enjoyable. Gaining the various permissions, visas and media accreditations to certain countries and every major commemoration was a challenge from the start. I was always at the mercy of the organizers, the government press departments, the embassies, and unforeseen circumstances. Yet, in the end, I was very fortunate and privileged to have had the chance to photograph US president Donald Trump at the Arlington Cemetery in Washington, Russian president Vladimir Putin at the victory parade in Moscow, Queen Elizabeth II during the Trooping of the Colour Ceremony in London, and German chancellor Angela Merkel and French president Francoise Hollande in Verdun.

Who partnered with you to create this book?

I have been photographing and creating also World War Two-related image sever since I went to Normandy in 2004 for the commemoration of the 60th anniversary of the D-Day landings. In time the hobby turned into a kind of profession. By chance I met Peter Gaal, the CEO of Beyond Band of Brothers, the market leader military historic tours operator company in the US. He really liked my works and I became the official supplier of photo images to Beyond Band of Brothers. When I told to Peter about the details of my First World War book project, he immediately stood behind me with Beyond Band of Brothers as the main sponsor of this project.

I also got huge amount of support in the organization of my travels from the Hungarian Ministry of Foreign Affaires and the Hungarian Embassies. Without their diplomatic assistance I could have not covered each and every corner of the Great War. I also need to mention here that I am very grateful to the Government of Egypt and the Kingdom of Saudi Arabia. Without their support I could have not photographed the Hejaz Railway, the Suez Canal and the Sinai which were all essential parts of the First World War.

What is your goal with this book? What do you want you audience to take away from the experience of seeing these images, and reading these stories?

The last surviving veteran of the Great War who saw front-line action, Frank Woodruff Buckles, a US Army corporal, passed away at the age of 110 on 27 February 2011. The last person from any country to have seen active military service during the war, the English woman Florence Beatrice Green, died at the age of 111 on 4 February 2012.

Despite it being only a handful of years since the last veterans – those that could recount stories of the war from first-hand experience – were finally laid to rest, the general public have limited knowledge about what exactly took place between 1914 and 1918 and why it happened. It is we who have had the privilege of talking to survivors of the First World War that must now keep the memory of the Great War alive, so that we might pass the baton to future generations. Because if we understand the circumstances and consequences of the World War One, we can help humanity avoid World War Three. And this is precisely why the creation of this book was such an important mission for me.

Tell us about the related exhibition in Sarajevo. Sounds like an incredible opportunity to tell the story. What will visitors see there?

This fascinating city is one of Europe’s most historically intriguing places. The city captured international attention three times within the span of a hundred years, being the scene in 1914 of one of the most momentous political murders in modern history, one of its longest-running sieges between 1992 and 1996, and host of the only Olympic Games in 1984 ever awarded to the Balkans. The world once again turned its attention to Sarajevo on 28 June 2014 as it became the first stop on the four-and-a-half-year-long global tour of the centennial commemorations of the First World War.

I fell in love with Sarajevo during my first visit, and when the question came where I would like to have my first international photo exhibition staged as a preview to my book, the answer was natural: it has to be Sarajevo. I’d like to close the five-year long project where it all started. The exhibition will open on the 28 June 2019 in the building of the Townhall to where archduke Franz Ferdinand arrived for a reception shortly before Gavrilo Princip shot him on the 28 June 1914. But the choice of the date is more importantly because it will be the 100th anniversary of the signing of the Versailles Treaty that officially concluded the First World War. Back in 1919 the Allies decided that the signing ceremony with Germany should take place exactly on the 5th anniversary of the assassination.

The event will be hosted by the City of Sarajevo and supported by the Hungarian Embassy in Bosnia Herzegovina. My exhibition, which will be opened by Georg von Hapsburg, the grandson of Charles IV, the last monarch of the Austro-Hungarian Empire, and by the British historian, Norman Stone, will be one of the official closing events in the world of the 2014-2019 Centennial period.

We have hopes of seeing this exhibition in the US. Tell us about the future schedule.

The actual book launch will take place on 11 November 2019 in Budapest together with another major photo exhibition. As my book will be published most importantly in English language and as it will cover all of the US centennial commemorations that took place in Kansas City, Washington and at Cantigny, Belleau Wood, Marne and Meuse-Argonne on the Western Front, I hope it will be a well received book also in the United States. As far as photo exhibition and book launching event is concerned unfortunately so far nothing has been planed in the US. But obviously I am more than open for any great opportunity. 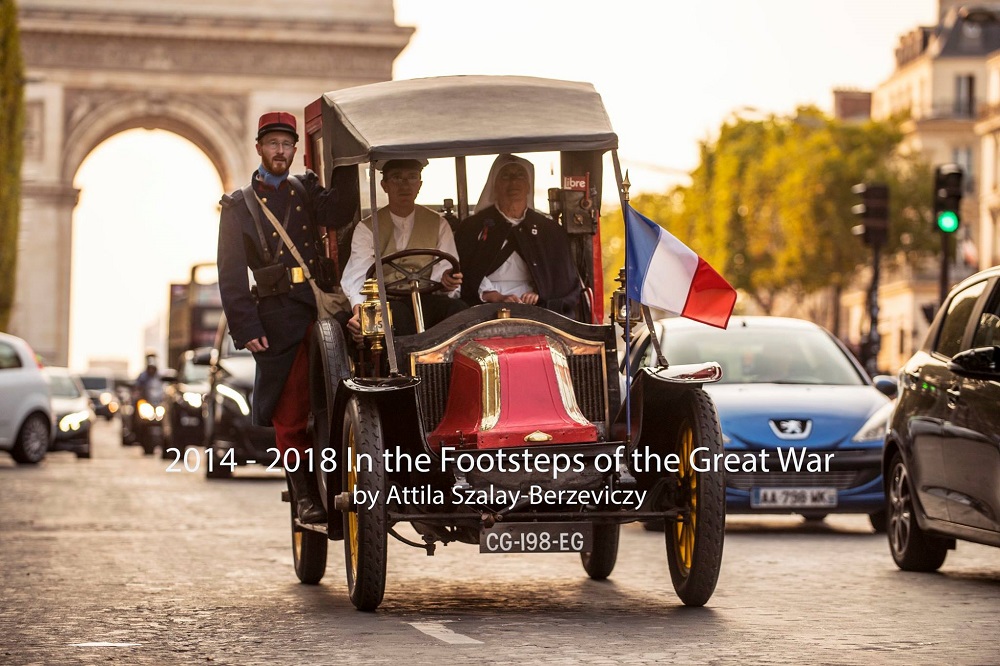 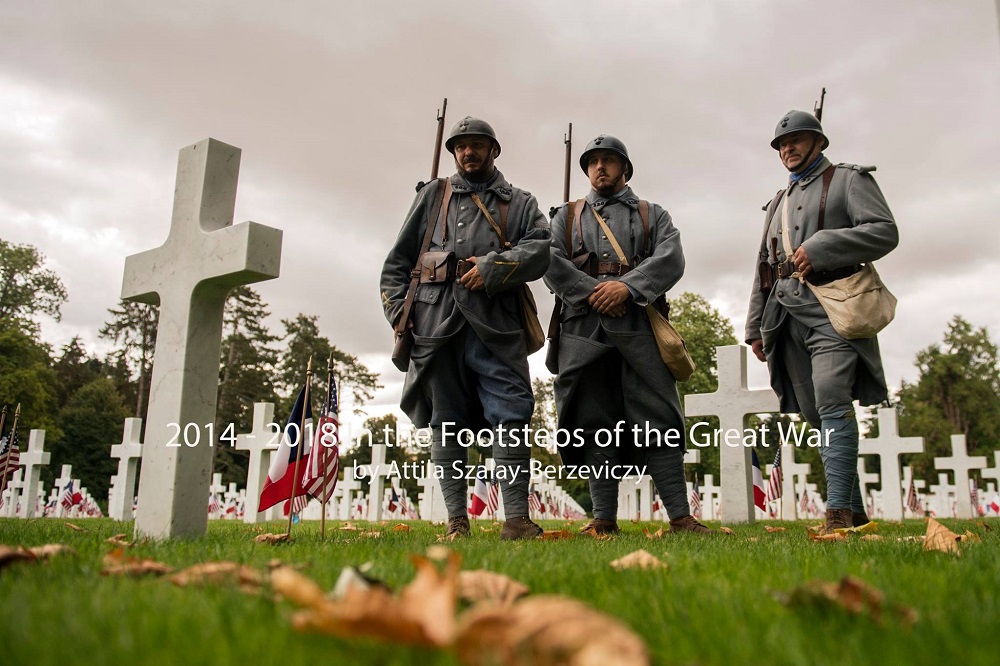 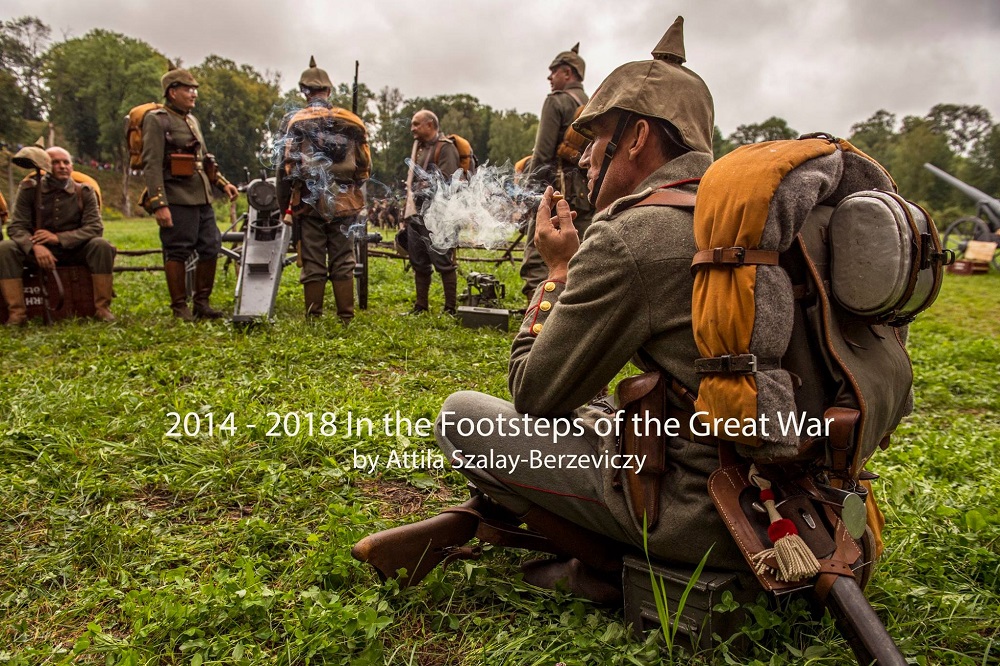 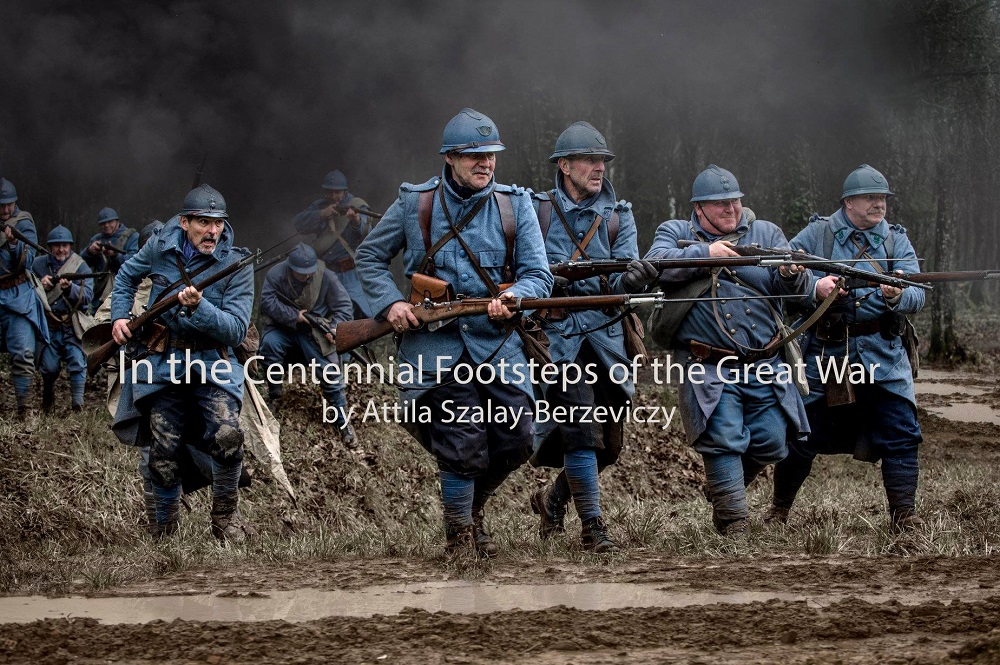