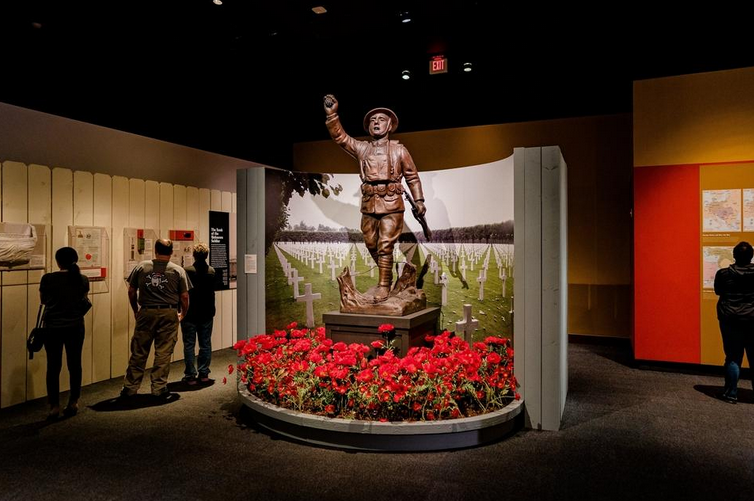 Few were as big as the Great War, otherwise known as World War I, which ended not much more than 100 years ago with the Armistice of Nov. 11, 1918.

The United States entered the European showdown of doomed empires late but with enormous impact, especially back at home, as a densely organized and visually sharp exhibit, “WWI America,” argues at the Bullock Texas State History Museum. The exhibit runs through Aug. 11.

This exhibit, which originated with the highly regarded Minnesota Historical Society in St. Paul, Minn., includes a fair share of personal stories, such as ones about “doughboys” like Charles Whittlesey, part of a “Lost Brigade” caught behind German lines, and José de la Luz Saenz, who fought for democracy in France and against racial segregation in the U.S.

Yet pictures and numbers do the heavy lifting in this impressive show that’s squeezed into the Bullock’s special exhibition space downstairs.

Meditate at the entry to the exhibit, for instance, on statistics about the U.S. in 1914, at the start of the war that the country did not join until April 2, 1917. The U.S. population stood at 103 million, less than a third of what it is today. One in seven Americans were foreign born, about the same as today. Ninety percent of Americans were considered white, as opposed to 63 percent these days. A third of American households had telephones, but only one in 10 Americans paid income tax, recently made possible by the 16th Amendment to the U.S. Constitution that was ratified in 1913.

In 1914, just 16 teams played major league baseball, “America’s pastime,” and manufacturing jobs brought in an average of 53 cents an hour in wages. More Americans lived in rural areas than in cities and towns, and a third of the population was younger than 15 years old.