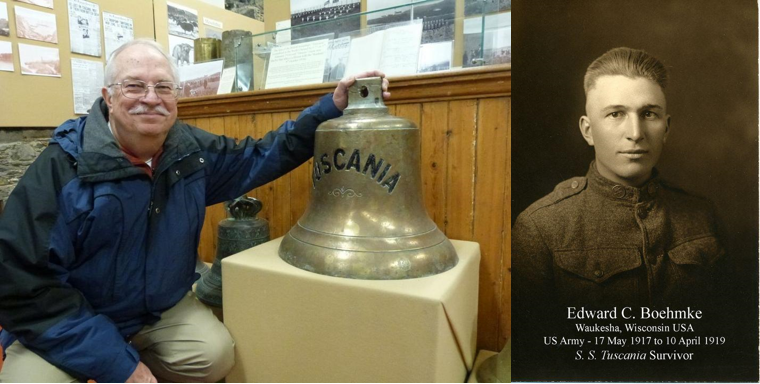 Dan Boehmke (left) with the ships bell from the SS Tuscania. His father Edward Boehmke (right) survived the sinking of the WWI American troopship in World War I.

His father, Edward C. Boehmke, served in a Wisconsin National Guard unit that eventually was sent to Europe in 1918. Dan put it all in a book titled, “The Unsinkable Edward C. Boehmke: The Story of Waukesha’s WWI Company L and the sinking of the SS Tuscania,” co-authored by John M. Schoenknecht.

Edward Boehmke came to Wisconsin in 1914, settling in Waukesha. In 1917, newspapers in America covered the war raging in Europe and the possibility of U.S. involvement. In Waukesha, a National Guard unit was formed which later evolved into the Fourth Wisconsin Infantry, Company L.

They trained with wooden guns at Camp Douglas in Wisconsin, then later went off to Camp Arthur in Waco, Texas to be attached to the 32nd Infantry Division.

In Jan. 1918, the unit traveled by train to Hoboken, New Jersey, where they boarded the SS Tuscania for the trip overseas as part of a convoy beginning on Jan. 28, 1918. As they neared the Scottish coast, the ship was torpedoed. According to a New York Times headline, 2,179 troops were onboard, 260 of which lost their lives.

It was not until March 9 that the family heard from Edward who said he was alive, happy and had lost everything he had with him except for a comb. At the Club meeting it was fascinating to hear Dan read from his father’s letters describing the harrowing experience of surviving the sinking of the Tuscania.