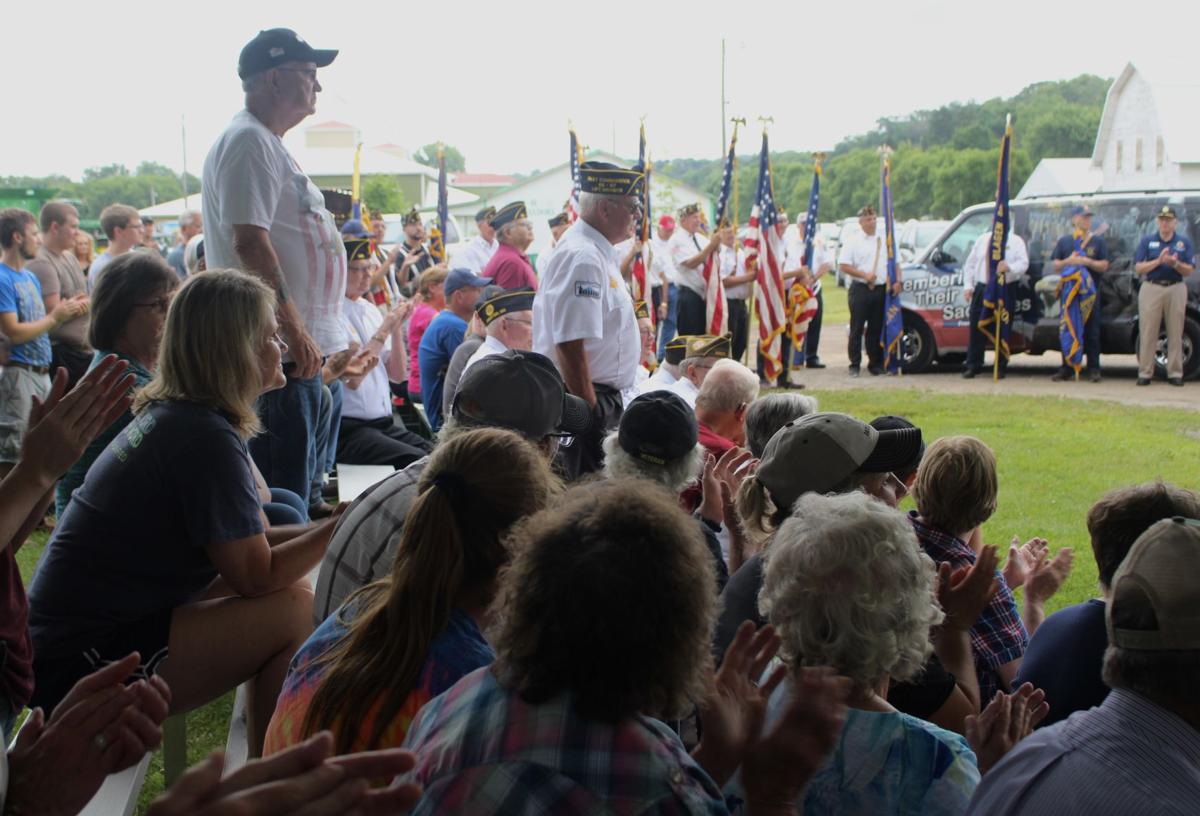 Veterans stand for the "Salute to the Services" medley during a celebration marking the restoration of the World War I Memorial Entrance at the Fillmore County Fairgrounds in Preston. 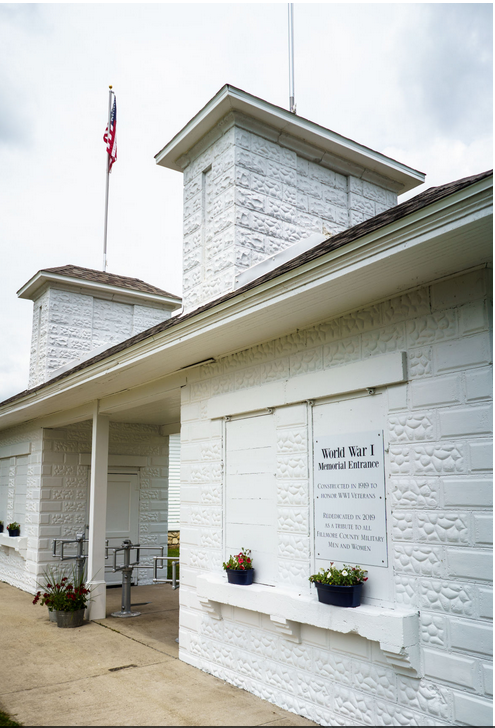 The World War I Memorial Entrance at the Fillmore County Fairgrounds in Preston was restored to mark it's 100th year. The structure was built 100 years ago, erected to honor soldiers returning from World War I.

"There were over 1,000 residents of Fillmore County that enlisted or were drafted into service during the first World War," said Pike. "Forty-eight of them were killed in action, and they did not return to Fillmore County."

Col. Joe O’Connor called for a moment of silence for those 48 men. He said the Lanesboro American Legion Post #40 is named after Henry M. Guttormson, the first casualty of WWI from Fillmore County.

"This entrance is a lasting tribute to WWI veterans, their families and the history of Fillmore County," O'Connor said.

About 50 people gathered for Tuesday's rededication. But in August 1919, about 10,000 gathered in that same spot to welcome soldiers home, Pike said. A good chunk of those soldiers showed up in uniform. O'Connor said they served barbecued beef at the event 100 years ago, and veterans were given free cigarettes and peanuts.

Sgt. Josh Krage, of Preston, talked about the emotions the memorial can generate.

Military service is "an emotional time for each and every one of us that has served," said Krage. "So when Col. (O'Connor) got emotional, I think we all did as veterans, because we know what we go through."

Krage reflected on what it means to be a veteran, and the weight that veterans carry.

"We understand what it's like on a fallen soldier detail, as we fold and hand the flag to a loved one," Krage said. "Or as we do the gun salute, we understand the emotions that come with it, because we understand that could have been us."

A parade of veterans from different segments of the armed forces assembled at the Trailhead in Preston and marched over the Fillmore Street bridge to the fairgrounds entrance, where retired and active military personnel, along with local residents, were waiting. Trainer planes from the WWII era flew overhead during the presentations.

Aside from the updated sign, renovations were made to the entrance to restore its structure before Tuesday's event. Sagging roof boards were repaired or replaced. Two large flagpoles were repaired, and the original turnstiles were sandblasted and repainted. The Fillmore County Fair Board used money from a Clean Water Legacy Heritage Fund grant, and funding from Harmony, Preston and Lanesboro Area Community Foundations. The Preston Historical Society and various local VFW posts also contributed to the restoration.

Read the entire article on the Post Bulletin web site.