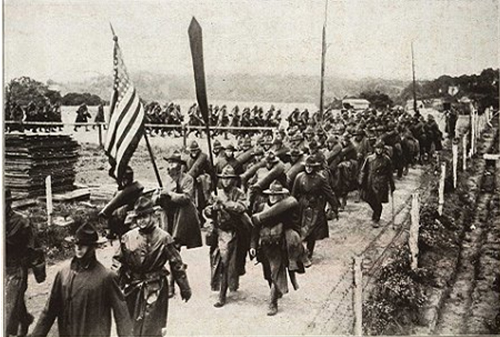 Could such a scene occur in an American office? I doubt it. As a small, one-family corrective, my son and I have devoted his junior-year spring break to a tour of the Western front battlefield from north to south, from Ypres to Saint-Mihiel. To steal a joke from James Thurber, if this has been done before, all I can say is that we are doing it again. If we see anything interesting, I’ll post it here. In the meantime, some thoughts on why the First World War looms so small in the United States.

First, Americans prefer narratives in which they play a central heroic role. The Dwight Eisenhower of the First World War was French, Marshal Ferdinand Foch. Those Americans who cared most intensely about the war found themselves enlisting under other people’s banners. John Singer Sargent painted his great war canvases for Britain’s Imperial War Museum. Edith Wharton volunteered for French relief organizations. Raymond Chandler joined the Canadian army. Ernest Hemingway drove Red Cross ambulances on the Italian front. Henry James forswore his U.S. citizenship and naturalized as British. John Dos Passos, another Red Cross volunteer, later savagely satirized the war as “Mr. Wilson’s war”—somebody else’s war, not his. So it has remained. When the great American literary critic Paul Fussell wrote his marvelous “The Great War and Modern Memory,” he focused on English writers. Their American counterparts may have had a lot to say, but somehow Fussell decided it was not an American thing.

Second, while Americans did win victories in 1918, on the whole, the performance of U.S. forces in the war was not very impressive. Americans did not lack for courage: U.S. forces showed a fighting spirit that had long before been bled out of their allies and adversaries. But they did lack experienced officers, adequate equipment, built-out logistical systems, and almost everything else necessary to fight an industrial war effectively. Their commanders resented and rejected advice from their bloodied French and British counterparts. Lacking sufficient artillery, tanks, and aircraft, they denied that those things were necessary. They drove Americans against German trenches and bunkers in 1915-style human lines, suffering monstrous 1915 casualties for pitiful 1915 gains in ground. There were few First World War equivalents of D-Day or Midway out of which legends could be made.

Third, the war does not obviously or immediately relate to contemporary controversies. We can’t talk about race without talking about the Civil War. Any discussion of America’s role in the world will soon invoke World War II and Vietnam. The Revolution will forever transfix the Republic it created. The First World War, however, now excites interest mainly from isolationist libertarians looking for a war it’s less awkward to oppose than World War II. The war’s most tragic lessons about the need for United States leadership to secure world peace have been so thoroughly internalized by the American political elite that it has forgotten where and how it learned them.

But fourth, and perhaps most importantly of all, ranks the failure of the war to accomplish the aims set by its more idealistic American supporters. It didn’t make the world safe for democracy. It was not a war to end all wars. In their reaction against those disappointments, Americans also reacted against the truths contained in the war’s overstated slogans and justifications: that American-style democracy really would have been isolated and endangered if the Kaiser’s Germany had won its bid to master the European continent; that the German war was aggressive and cruel, not on a Nazi ideologically motivated murderousness scale, but in ways that often ominously prefigured or rehearsed Nazi methods of occupation and exploitation; that the allies, for all their imperialist faults, were fighting for principles vital to Americans—who, by the way, are not without faults of their own. “Never such innocence again,” wrote the British poet Philip Larkin about the war—but he felt at least some large measure of nostalgia for that innocence, for “the sun on mustachioed archaic faces, grinning as if it were all an August Bank Holiday lark.” The innocence many Americans looked back upon after 1918 was the innocence of the mark and dupe. They resented it—and like many who feel they have made a bad bargain, they preferred not to think about it, and so have lost the evidence that the bargain was not perhaps so bad as they supposed.

The American dismissal of the trauma of the First World War is itself deceptive and dangerous. Large national experiences are rarely truly forgotten. They exert their influence even when that influence is denied. The First World War haunts American history too. I’ve argued that case before. I suppose I’ll be doing it again.