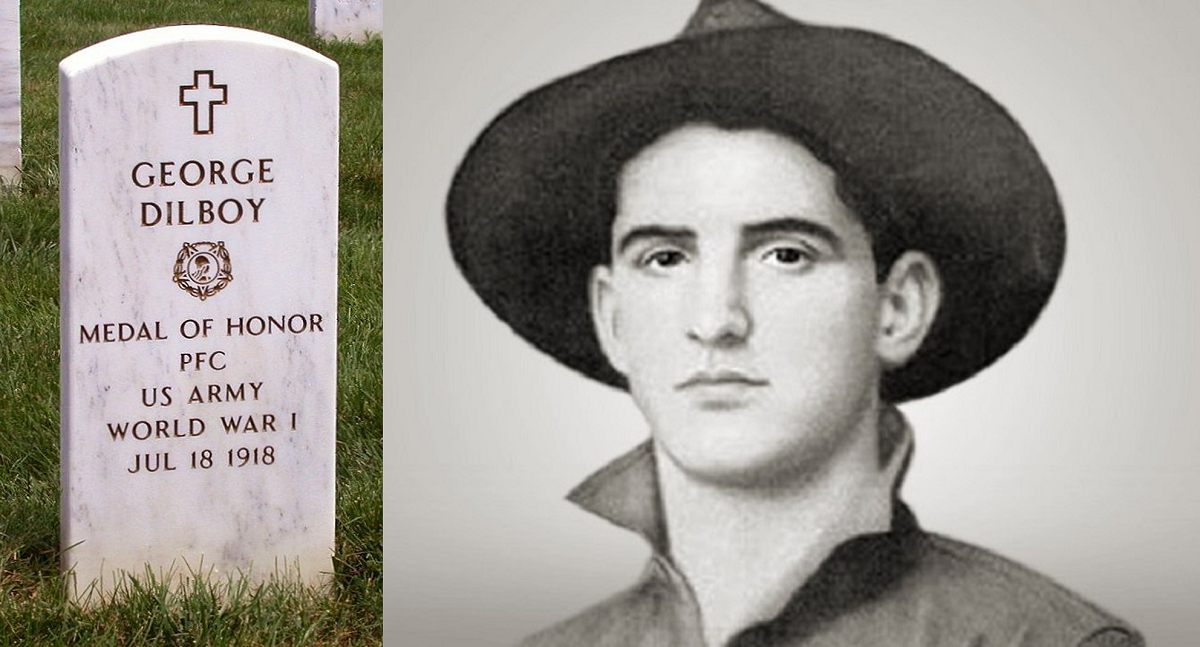 George Dilboy, killed on a battlefield near Belleau, France, was the first Greek-American soldier who fell in the line of duty in World War I.

George Dilboy, The First Greek-American who Fell in WWI

By Philip Chrysopoulos
via the GreekReporter.com web site

It was on this day in 1918 that George Dilboy was killed on a battlefield near Belleau, France after fighting so courageously that he was posthumously awarded the Medal of Honor, America’s highest medal for bravery. Dilboy was the first Greek-American soldier who fell in the line of duty.

The Greek-American’s conspicuous heroism was so outstanding that he was recognized and honored by three US presidents. Woodrow Wilson signed the authorization awarding Dilboy the Medal of Honor, Warren G. Harding brought his remains back to be buried with honors at Arlington National Cemetery, and Calvin Coolidge presided at his final burial there.

Born in Alachata, in Western Anatolia, in 1896, Dilboy’s Greek name was Γεώργιος Διλβόης, which was Americanized when his family emigrated to the United States.

Andrew T. Kopan wrote about Dilboy in an article titled “Defenders of the Democracy: Greek Americans in the Military”, in the Greek-American Review, in September of 1998.

According to Kopan, “After the Balkan War of 1912-13, his family fled to America to avoid persecution from the Turks… On July 25, 1917, he was assigned to company H, 103rd Infantry, 26th Division. He was sent with his company to France and took part in the Champagne-Marne defense and the Aisne-Marne counter offensive.”

The official citation of Dilboy’s Congressional Medal for Bravery reads: “Private Dilboy, accompanying his platoon leader to reconnoiter the ground beyond, was suddenly fired upon an enemy machine gun, rushed forward with his bayonet fixed through a wheat field toward the gun emplacement.”

Dilboy fell “within twenty-five yards of the gun, with his right leg nearly severed and with several bullet holes in his body. With courage undaunted, he continued to fire into the emplacement from a prone position, killing two of the enemy and dispersing the rest of the crew,” the citation notes.

Dilboy was posthumously awarded the Medal of Honor, the highest medal America can bestow upon a soldier, which was presented to his father, Antonios Dilboy.

Read the entire article on the GreekReporter.com web site.