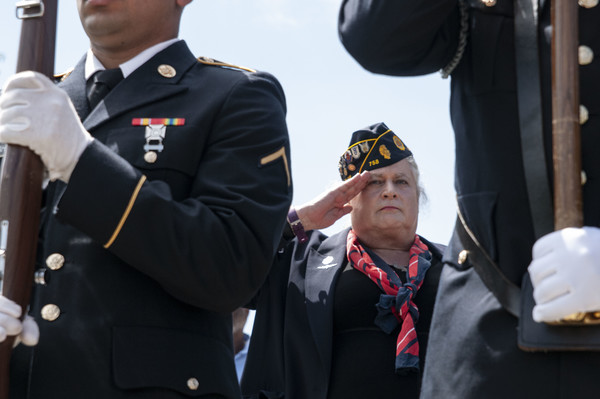 Lt. Col. (ret.) Jennifer Pritzker, founder of the Pritzker Military Museum and Library in Chicago, salutes the color guard as they retire the colors following a rededication of the Victory Monument in Chicago’s Bronzeville neighborhood, July 5. The event was held to commemorate the 8th Illinois, an all African-American unit that fought in the Spanish-American War, World War I and World War II. During World War I the unit’s Soldiers were awarded several medals of valor including 21 Distinguished Service Crosses – the second highest award for act of heroism, and 68 Croix de Guerre, the French award for acts of valor. (Photo by Sgt. Christopher Garibay)

The Illinois National Guard, the Pritzker Military Museum and Library, the 8th Infantry Association, the Chicago Military Academy at Bronzeville, the World War I Centennial Commission, Friends of the Victory Monument Memorial and several dignitaries took part in the rededication of the Victory Monument in Chicago on July 5 honoring the World War I service of the Illinois National Guard’s storied all African-American 8th Infantry Regiment.

The monument was erected in 1927 to honor Soldiers in the Illinois National Guard’s 8th Infantry Regiment. The 8th Infantry was re-designated as the 370th Infantry Regiment during World War I, where they fought under French control because of institutional racism in the U.S. Army at that time. Upon return to Illinois, it became the 8th Infantry once again. The ceremony was a way to raise awareness of the actions of one of the most valiant African-American units to take part in the “Great War.” The monument recently underwent a $62,000 renovation. Renovation funds came from a grant from the World War I Centennial Commission 100 Cities Project and the Chicago Department of Cultural Affairs and Special Events’ budget for conservation and maintenance.

“This is the only monument of its kind in the United States and it is the untold story of World War I black soldiers who fought valiantly under French command and control,” said former ambassador and U.S. Senator Carol Moseley-Braun. “This is the only memorial that represents their work and their sacrifice, and as a descendant of a member of the 370th, it means a lot for me and the community.”

The monument is nestled along Martin Luther King Drive in the Bronzeville neighborhood of Chicago. It was in this community more than 100 years ago that young black men heeded the call of their nation to fight in Europe, despite facing segregation and racism back at home. Still, undeterred, a total of 400,000 black troops across the country would fight in the Great War of which 42,000 would see combat. The 8th Illinois, or the “Black Devils” as they would come to be known by the German Army, would see 21 men receive the Distinguished Service Cross – the nation’s second highest award for valor, and 68 Croix de Guerre - France’s award for units and individuals from foreign militaries for actions of valor. During the war, 137 men would die in France, and their names are enshrined on the memorial for all to see.