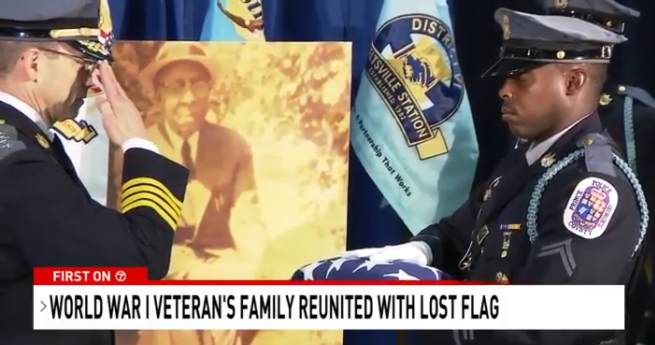 Family is reunited with missing flag, an heirloom from their WWI veteran ancestor

PRINCE GEORGE'S COUNTY, MD (ABC7) — On July 17, a folded flag was found in the middle of the road in Prince George's, inside of a shattered glass display case.

Navy veteran Tom Jarrett picked the flag up, knowing it had to mean something to someone. ABC7 ran his story in an attempt to help find the owner.

And the right person was watching: William Holley's oldest daughter. She immediately called her dad.

79-year-old Holley had inherited the flag after the death of his wife's uncle, WWI veteran Marcellus Herod, in the early 1980s. It was the memorial flag from Herod's casket.

Holley hadn't yet told his daughter that while he was moving, his car piled high with belongings, the flag had fallen off and gotten lost. Another driver stopped him and told him he had lost something, but when he retracted his journey, the flag was gone.

Prince George's police retrieved the flag from Jarrett and were able to present it back to Holley ceremonially.