My husband and I recently went to the movies at the St. Lawrence Arts Center in Portland. As old-movie buffs, we were thrilled to see what Kinonik, a small nonprofit that screens celluloid classic films, had in store. The Kinonik team did not disappoint. They re-created the magic of seeing a silent movie, complete with live piano accompaniment. The movie was “The Big Parade,” a 1925 war drama that was one of the most successful movies of the silent era. 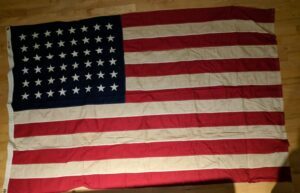 This was the flag that was draped over the casket of World War I veteran Garth Wise and then given to his widow. Eighty-eight years after his death, his great-niece Alison Jones Webb has donated the flag to the Maine Military Museum. (Photo by Alison Jones Webb)The three-hour film is known for its graphic scenes of hand-to-hand combat, poison gas and scores of troops walking into machine-gun fire, and it was the inspiration for more well-known films such as “All Quiet on the Western Front” in 1930. “The Big Parade” has such cultural significance that the Library of Congress selected it to be included in the National Film Registry, an honor reserved for films that are culturally, historically or aesthetically significant.

As I was watching the movie, I found myself thinking about Garth Wise, my maternal grandmother’s half brother, who fought in World War I. Garth was born in 1895, and his mother died when he was 5. He married at the age of 26 and died when he was 36. He had no children.

His legacy in our family was always an add-on to my grandmother’s sister and brother. Growing up, I heard very few details about his life or his service in the war, but I remember hearing that “he came back different.” He jumped when a screen door slammed and liked to be alone as much as possible. Today, we would probably say that he had post-traumatic stress syndrome.

There was one reminder that we had, though, that I kept thinking about during the movie. In our basement, with my mother’s personal effects, was a 48-star flag, folded neatly in a triangle, with a note pinned to it: “Garth Wise. Served in WWI.” This was the flag that was draped over his casket and then given to his widow. Somehow it was passed on to my mother and had remained tightly folded in ceremonial military style for over 80 years.

After seeing the movie, I felt a sense of responsibility to honor his memory as a soldier, to find a home for the flag. It doesn’t belong in my basement any longer.