Iowa rooster crowed for cash during World War I

Iowans have come up with some pretty bird-brained fundraisers over the years.

When RAGBRAI rolled through Dallas Center a few years ago, folks placed bets on Chicken Poop Bingo and watched the birds leave “surprises” on a numbered grid. In the early 1990s, anyone who donated to WOI public radio got to name a chicken at Living History Farms. (Whenever a donor showed up to visit, a staffer called out the bird’s name and pointed to whichever one happened to look up: “Oh, there it is! It’s that one over there.”) 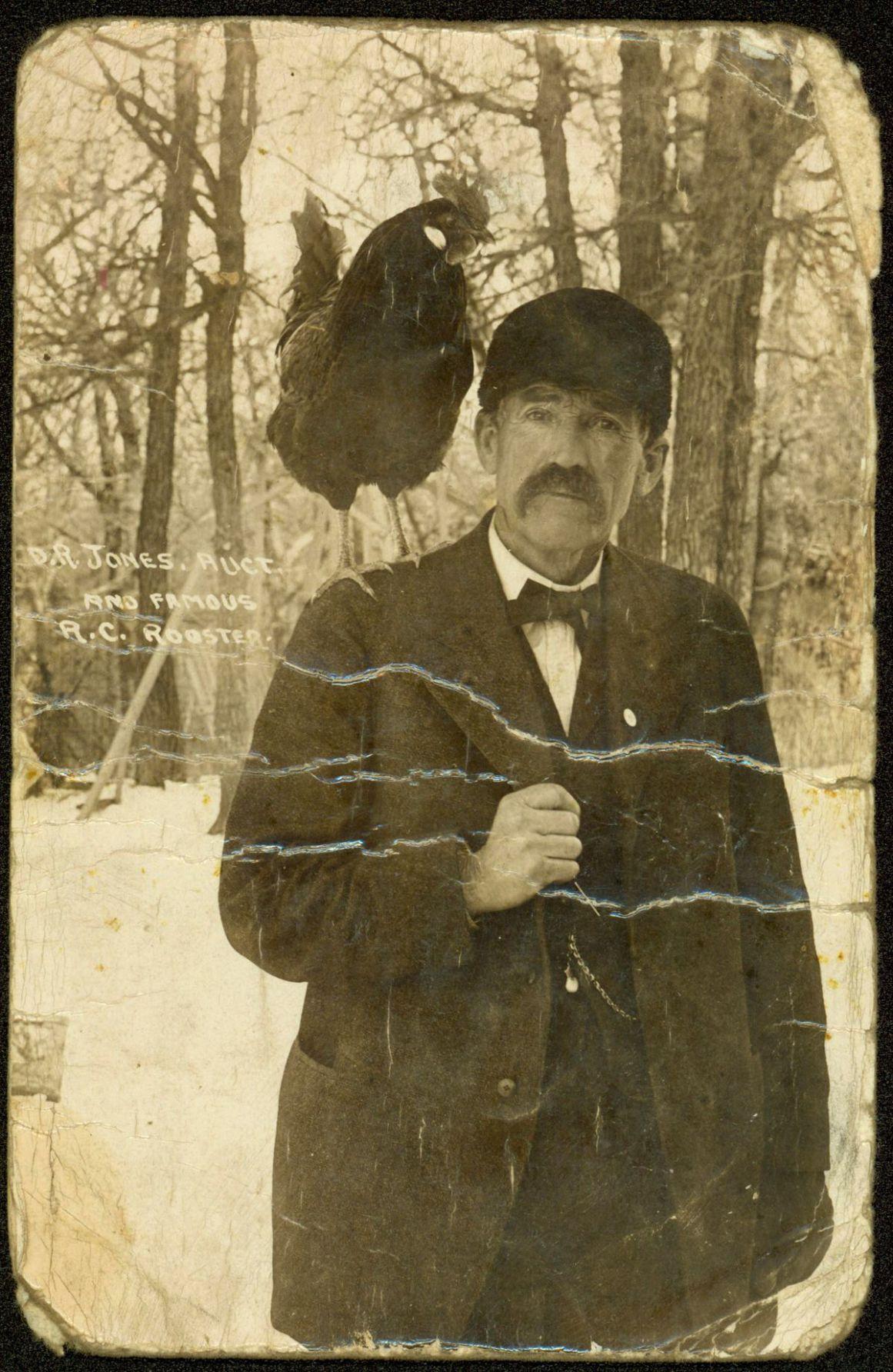 During World War I, Private C.W. Gill of Exira, carried this postcard of auctioneer D. R. Jones with the rooster Jack Pershing. Gill gave it to Jones after the war and asked that he donate it to the State of Iowa. (State Historical Society of Iowa)But Iowa’s most famous fowl fundraiser was a scrawny little rooster named Jack Pershing, who is on triumphant (taxidermy) display at the Rolling Hills Bank in Casey, straight west of Des Moines. The old bird was part of a temporary exhibit for the town’s sesquicentennial festival, July 12-14.

Jack’s overnight rise to celebrity status began just about a century ago,  on Dec. 15, 1917, when local auctioneers Ed Meinkey and D.R. Jones were gathering items to auction off in support of the American Red Cross during World War I.

Mark Dunkerson, a farmer from nearby Fontanelle, wanted to contribute something for the auction that night but could spare only a chicken.

“I don’t have much to offer,” Dunkerson told the auctioneers, according to an account the Audubon County Journal published years later in 1944. “But there are a couple of roosters in that little flock of chickens. You could have one of them, if that would help any.”

Meinkey and Jones searched the barnyard, found an unhappy brown-black rooster in a yeast box and enlisted him for the auction with relatively low expectations. As the Audubon County Journal put it, “A scrub rooster is a scrub rooster –  just that  – and, as an article of value, is reckoned somewhat lightly.”

But this was for a good cause, after all, so someone made a 50-cent bid.

The buyer, however, thought the rooster was “too darn cantankerous to take home,” so he told the auctioneer to sell it again, according to a colorful account on an Adair County tourism website.

Read the entire article on the Mapleton Press web site.