In August 5th's edition of the World War I Centennial News Podcast, Episode 134, host Theo Mayer spoke with David Rockefeller Jr., scion of the legendary American family and a very successful business leader and philanthropist in his own right. Mr. Rockefeller is involved in many prestigious non-profit organizations, including the Council on Foreign Relations and the Museum of Modern Art. In the interview, Mr. Rockefeller discusses the connection between his family's early philanthropic ventures and the First World War, his impression of the National Memorial maquette, and why WWI is important to remember. The following is a transcript of the conversation, lightly edited for clarity: 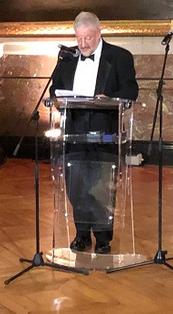 Philanthropist David Rockefeller, Jr. receives the the inaugural Versailles Award for American Philanthropy, presented in recognition of the contributions his grandfather, John D. Rockefeller, Jr. made to rebuild France after World War I.

Theo Mayer: Now we're going to stay with our theme of American philanthropy as we explore how World War I has been and is being remembered and commemorated in the present. With us today, is businessman and noted philanthropist David Rockefeller Jr., a fourth generation son since John D. Rockefeller established the foundation in 1913. David and his wife Susan recently joined the World War I Centennial Commemoration at a very special event held at the Palace of Versailles on the anniversary of the peace treaty signing that ended World War I with Germany. David Rockefeller Jr. previously served as the chairman of The Rockefeller Foundation itself, including presiding over the organization during its centennial in 2013, but his interests are really diverse, including the arts. David Rockefeller is a life trustee at the Museum of Modern Art, having served there as a trustee for nearly four decades. He is a board member of the Asian Cultural Council, a fellow of the Academy of Arts and Sciences, and a member of the Council on Foreign Relations. His accolades and accomplishments just go on. David, welcome to the podcast.

David Rockefeller: Thanks, Theo. I'm glad to be with you today.

Theo Mayer: Now for over 130 weeks we've been exploring the many and oftentimes forgotten facets of World War I, but we haven't had a chance to talk about the role and the impact of your family, not on the war, but on humanitarian relief during this cataclysmic global event. David, could you tell us about the genesis of The Rockefeller Foundation and how it got involved in World War I years before America did?

David Rockefeller: Yes. Well, of course I wasn't around at that time, but I did serve on the board of The Rockefeller Foundation for 10 years and half of that time as its chairman, so I became much more familiar with the history of the foundation, which was founded in 1913 before the war began. It really was one of the first two major philanthropic foundations formed in the US along with The Carnegie Foundation. And early on the then-trustees, including my grandfather, John D. Rockefeller Jr., were very moved by the plight of humans in grave situations. And so, it was not surprising that among the early actions of the foundation were to give relief, including with the Belgian refugees in 1914, so there was a very humane purpose for the foundation, really for the welfare of mankind around the world.

Theo Mayer: In your career, you've been deeply involved in philanthropy and even more so historically, The Rockefeller Foundation essentially defined what modern philanthropy is. Could you talk about that a bit?

David Rockefeller: Yes. I was fortunate enough, Theo, to be the chair of the foundation in its centennial year, 2013. And during that time, we had an opportunity to look back at our own history and produced actually five books on the history and different elements of The Rockefeller Foundation. And it really, of course, arose out of the fortune that John D. Rockefeller Sr. had amassed and his son, who was called Junior, persuaded his father that he ought to become involved as a philanthropist. Senior was certainly willing to do this and started one of the great foundations in the world which still has an endowment value of more than four billion dollars. So it was the father and son who began the foundation and gathered around them distinguished individuals in medicine, and science, and philosophy, et cetera to be the other trustees.

Theo Mayer: Well, with the foundation's role and through the years, and the years after the war, your family has a genuinely unique relationship to World War I. So from that unique perspective, and obviously from your own personal view, why do you think it's important for America to remember World War I? 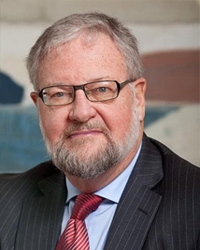 David Rockefeller, Jr.David Rockefeller: Well, I think it's enormously important to draw lessons from any conflict in which we have been involved. As you well know, the US is kind of schizophrenia about whether it wants to be involved beyond its own borders. At times, it's been very isolationist. And in both world wars, it took the US quite a while to decide they wanted to engage in a conflict, which was in a sense, principally about Europe. The other side of the US is more of an expansive and engaged belief in the might of the United States and the justification of getting involved in wars in foreign lands. And luckily in both cases, the U.S. government decided to commit its soldiers, its lives, and its technology to defeating the enemy in both cases (Germany). Then of course, history will show that it was a lucky thing that we did.

Theo Mayer: Well, let me change gears a little bit. You've actually been involved in sitting on the boards of the Museum of Modern Art and some other things, so I want to address you as a person involved in the arts. I saw some pictures from the evening at Versailles where Sabin, in his animated style, and you are in front of the maquette and he's clearly telling you the story about "A Soldier's Journey," the main sculpture for the new National World War I Memorial. What do you think about that?

David Rockefeller: Well, I've only seen the maquette, of course, because that's all that exists so far, but it looked like a very moving narrative sculpture where you looked from left to right and really saw the history of a soldier's engagement, multiple soldiers' engagement in World War I. And so I'm very optimistic that Sabin's work will be a great success when it's shown in full scale in Washington DC.

Theo Mayer: David, at one point you sat as the citizen chair of the National Parks Foundation. What was that experience like for you?

David Rockefeller: I had a very positive experience as the citizen chair of the National Park Foundation. In that role, I reported actually to several secretaries of the Interior, and it was a great experience for me to combine my interests in philanthropy, in the environment, and in art.

Theo Mayer: Well, one last question for you. From your own unique perspective, what do you think people should remember about America's role in World War I?

David Rockefeller: I hope what people remember always is the horrible cost of war, and the need in each situation to very, very carefully define what our interests are in getting into a war. I heard General Colin Powell recently talk about his philosophy, which I share, which is, "Enter a war as a last resort. But if you do enter, make sure that you are going to win it."

Theo Mayer: A very good closing statement. Thank you so much, David. It was a great interview.

David Rockefeller: Thanks very much. I appreciate it very much, Theo. Good to talk to you.

Theo Mayer: We want to thank David Rockefeller Jr. For taking the time from his busy schedule to be with us today, and for the great work both he and the foundation have been doing for such a long time. As we mentioned at the top of the segment, we have links for you in the podcast notes to the book, A Century of Giving, and our other research notes.

“Beyond Charity: A Century of Philanthropic Innovation”: