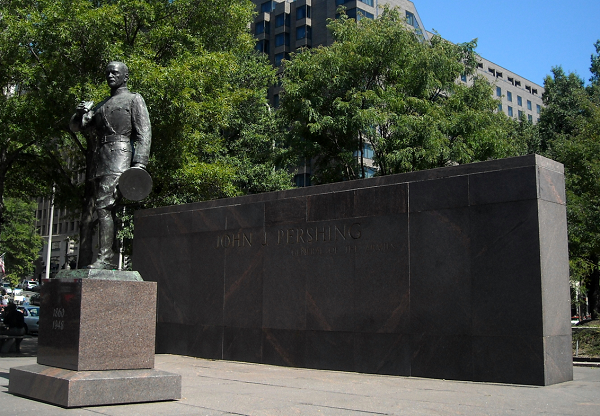 In the near future, American parents bringing their kids to the nation's capital for Memorial Day weekend to see the city's military memorials will be able to add another attraction to their sightseeing list.

Not far from the Korean War Veterans Memorial and the National World War II Memorial, the United States World War I Centennial Commission plans to properly recognize a conflict once thought of as "the war to end all wars." The nonprofit has launched a design competition to redevelop Pershing Square Park into a designated national monument.

"It was a war that brought on an American century. It was a war that changed the world for Americans. I think it's so important for so many reasons that we honor these people," said Rob Dalessandro, chairman of the centennial commission, who retired from the Army as a colonel in 2009.

Pershing Square Park is in a plaza just off Pennsylvania Avenue between the Department of Commerce and the historic Willard Hotel, on the edge of downtown Washington. It was erected in 1981 with a statue honoring Gen. John J. Pershing, leader of the American Expeditionary Forces during World War I.

"Right now it's a park that has a memorial element tacked on to it almost as an afterthought," said Edwin Fountain, the commission's vice chairman. "We would like to make it a site that's looked at first and foremost as a World War I memorial."

Fountain said that, once redesigned, Pershing Square Park will be the only national memorial in Washington dedicated to all Americans who served in the Great War. The existing District of Columbia War Memorial, at another location, is dedicated only to the city's veterans, while Pershing Square memorializes "Black Jack" Pershing and his "doughboys."

The commission aims to unveil the new memorial on Veterans Day, Nov. 11, 2018, the 100th anniversary of the Armistice.

Supporters of the Centennial Commission hope to raise $30 million in private donations to support its programming.

The commission wants a design that demonstrates the war's gravity and scale, forging "functional and perceptual linkages to the pathways, streets and civic spaces and architectural landmarks around the site."

The group is seeking submissions through July 21. Three to five finalists will be announced Aug. 4

A jury consisting of representatives from government, military, the arts and Washington citizens will evaluate the designs. The commission will then select the winner based on the jury's recommendation.

Fountain said the commission debated whether to limit the design submissions to U.S. participants, but decided to open it to international competition.

"It does commemorate a major event in world history," said Fountain. "So we thought it would be important for the competition to have that character. At the same time, there is, to this day, tremendous gratitude in Europe for the role the U.S. played in the war. We wanted to give European designers the opportunity to express their gratitude to the U.S. for our service in the war."