In August 4th's edition of the World War I Centennial News Podcast, Episode 134, host Theo Mayer spoke with Dr. Nancy Gentile Ford. The following is a transcript of the conversation, lightly edited for clarity:

Theo Mayer: For Remembering Veterans, a new World War I special subject website is now available at ww1cc.org. It's based on a book titled, Americans All! Foreign Soldiers in World War I. Let me set this up with the opening statement from the site. "Immigrants have served in every American conflict since the Revolutionary War. However, World War I represented the first time military forces were so ethnically diverse and foreign born soldiers served in such large numbers. Between 1880 and 1920, a short 40 years, over 23 million people primarily from Southern and Eastern Europe immigrated to the United States. During The Great War, almost one in five immigrants became a soldier in the United States Army representing some 46 nationalities." Now, if you ever doubted the true immigrant nature of the American melting pot World War I is certainly a testament to it and its strength. With us today is the author of that book, Dr. Nancy Gentile Ford, a professor at Bloomsburg University of Pennsylvania where she teaches 20th century American military cultural and political history. Three of her books include, The Great War and America Civil-Military Relations During World War I, and Issues of War and Peace, and our subject today, Americans All! Foreign-born Soldiers in World War I.

Theo Mayer: Well, welcome to the show. Let me start with my first question. Before we get into the translation of your book into a website, let me ask you a little bit about the subject of the book. Not only was this the most culturally diverse army in our nation's history, but the darn thing effectively came together in under a year. Can you talk a bit about what happened?

Dr. Ford: Sure. First of all, I argue in my book that immigrant leaders in the ethnic communities assisted the war department in various ways to train and teach English to foreign born soldiers. And so they helped also stimulate American patriotism at the same time they push for respect for the cultural traditions of the immigrants. The war department also was really interested at this time in morale. This is the first time we have a Military Morale Section under the Military Intelligence Division. They really wanted to keep the morale up of soldiers, and so I argue that the reason that the military, the war department, chose to respect ethic traditions of soldiers, their religion, their culture, et cetera, was because they wanted an effective army and they wanted to keep the morale up of the soldiers.

Dr. Nancy Gentile FordDr. Ford: Underneath the Military Morale Section, they started the Foreign Speaking Soldiers Sub-Section. This sub section then hired a well-known educated Polish soldier named, [Stanislok Gadowsky 00:22:19] . He was a lieutenant in the army. He spoke various languages. He organized a team of soldiers that were well educated. They were doctors, lawyers, businessmen, [inaudible] editors of ethic newspapers. This team that spoke multiple languages, then went into Camp Gordon. They started there in Camp Gordon, Georgia. They reorganize these soldiers into ethnic specific units, so you would have a Jewish company, and you would have a Italian company, a Czech-Slovak company, and things like that. At first, they were going to give them translators, so that a bilingual Anglo-Saxon American would be the officer, which was typical of the officer corps back then. But there is a problem with that. If you're in war and you have to have an interpreter or translator, it's going to be a problem, so the war department did something amazing. They actually promoted the leaders of ethnic communities that had been drafted as officers and sent them to officer training school.

Theo Mayer: We have now an openness to cultural diversity, but not to racial diversity, so if you had a foreign culture that happened to not be Caucasianish based, then that was a different concept.

Dr. Ford: Exactly. Jennifer Keene, out in Chapman University, has done some extensive work on this. She concludes that at first they were department was open to a little bit more change, not as much as you see with the immigrants, but it was actually the Southerners who objected to integration of the military or even training African American soldiers as combat soldiers, and so most of them served in service positions. So yes, there was a big difference between immigrants being more accepted in the military than African-Americans. But if you look at congressional records, you can really see some pretty terrible comments by Southern congressman about not wanting to train African Americans as combatants.

Theo Mayer: Can you tell our listeners a bit more about the Commission on Training Camp Activities that popped out?

Dr. Ford: Sure. Newton Baker, who was the secretary of war, he had been a progressive reformer before he became the secretary of war. And as a progressive reformer, he and others believed that instead of going after crime and vice like prostitution and gambling, et cetera, they would provide alternative activities and clean up the cities, put in parks, put in baseball fields, promote other activities, and really deal with the problems of the poor, and in this case, a lot of the poor were immigrants at this time. So when he brought the same philosophy, this progressive era philosophy into the army, he and Raymond Fosdick, the commissioner of Training Camp Activities, they both were trained that way, and so they said, well, let's make sure that the army stays clean as well. So there was no cure for VD back then, and so VD could cripple an army. And so they promoted a lot of propaganda to say, stay away from prostitutes, et cetera. They had these ethnic leaders who were well-educated, and they translated the materials on VD and other social, moral, uplifting brochures into various languages. They had sports, and music, and theaters and libraries, and they had hostess huts. At first they just had the YMCA. You'd go to the hostess hut and you could write home, listen to music, read books, read newspapers. What the Committee and Training Camps Activities did was they brought in The Knights of Columbus, which is a Catholic organization and the Jewish Welfare Board, they actually had their own hostess huts. They could go to the YMCA if they want, but the hostess huts had foreign language books. It had foreign language newspapers. That's where the religious services were held as well.

Theo Mayer: Fascinating. Well, let me ask you about your motivation for doing this book?

Dr. Ford: Writing the book, it was like going from absolutely no knowledge into trying to look at thousands of documents and trying to figure out what's going on. Immigrants have served in every conflict we've been in. I thought this was another way of educating the public about the importance of respect for immigrants and respect for their contributions in America.

The reason that I wanted to do this was because I teach research and writing, which is our capstone history course at Bloomsburg University in Pennsylvania, and I thought this would really be good to teach students how to do research. They could look at a summary of my chapters and then they could see the primary sources that I use and understand how you analyze primary sources.

Theo Mayer: On the website, you had a chance to do something that I don't think you did in the book, which was to publish the primary sources to the readers. 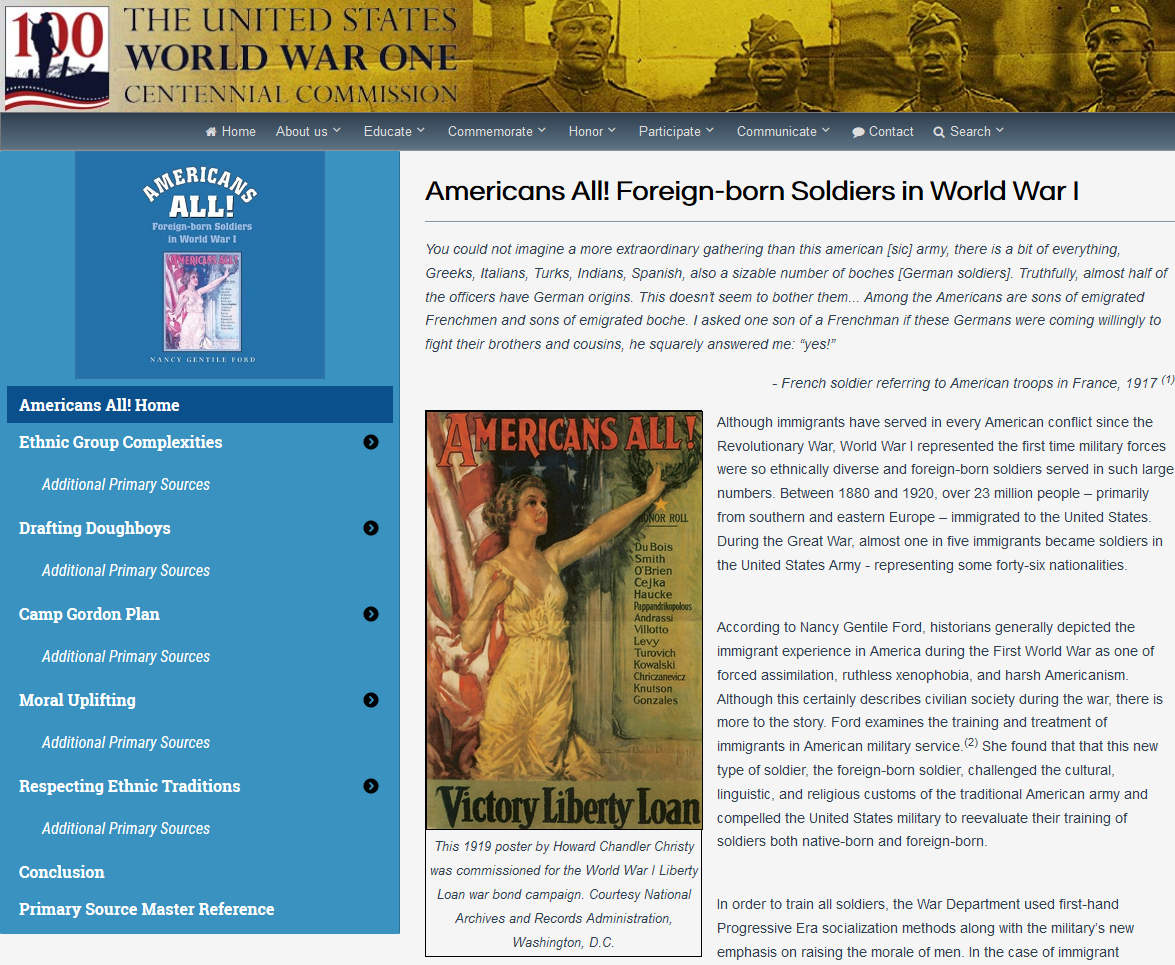 Dr. Ford: Right, exactly. What happened was my university really emphasizes professors student collaboration in research. When Chris Christopher asked me to do this, I thought this is an excellent student professor project. I selected Justin Sharp. He was an outstanding history major and he was very, very good with computers. I am technologically impaired, so I needed somebody that was good with computers.

And so he had these five totes that were just full of information, so he read my book, he organized the primary sources for each chapter, and then he summarized each chapter. And then I went in and kind of re-wrote, edited, added things to the summary of the chapters, and then I selected the primary sources and scanned them. And then Justin, who is a web master, actually built the website then.

Theo Mayer: For most people who get involved with World War I projects, this is really common for a guest that we have on the show, something they learn or experience they have as a result completely surprises them or stands out for them. How would you characterize that on this project?

Dr. Ford: Not only was I surprised about how the military respected the cultural traditions and religion of the foreign born, and I could just give you some details that really may even surprise you. For instance, the Polish soldiers wanted to say their confessions before they were shipped overseas to the AEF, but they wanted Polish Catholic priests. The war department went out of their way getting Polish Catholic priests to the camps where the Polish soldiers were to hear their confession. The Jewish Welfare Board asked for Matzo bread for soldiers during Passover. So I actually conclude that all of this allowed the immigrants and the soldiers to develop a dual identity, pride in being from their adopted country and fighting for their adopted country, but also pride in their individual ethnic group. I think that's extremely unusual, and I was not expecting to find that.

Theo Mayer: What should our listeners remember about this, and the Americans in uniform during World War I?

Dr. Ford: Well, again, I think their contribution speaks for itself. This is from Oscar Handlin and the book, Uprooted, which he wrote in 1951. He said, and I'm quoting, "Once I thought to write the history of immigrants in America, then I discovered that the immigrants were American history." I think that sums up the whole immigrant experience and sums up their experience in the United States Military.

Theo Mayer: Thank you for both taking the time to join us today, but more than that, thank you for sharing your knowledge and your insight about the subject, and you and Justin both for building the website because that goes on in perpetuity.

Dr. Ford: Yeah, and we can thank Justin for the website.

Theo Mayer: Terrific. Dr. Nancy Gentile Ford, educator, researcher and author and Justin Sharp, web builder and cyber instructor are the creators of Americans All! Foreign-born Soldiers in World War I, a website that you can find at ww1cc.org/americans, all lower case. You can find Dr. Ford's book of the same name on Amazon. We have links for both in the podcast notes.

Americans All!: Foreign-born Soldiers in World War I on amazon.com.