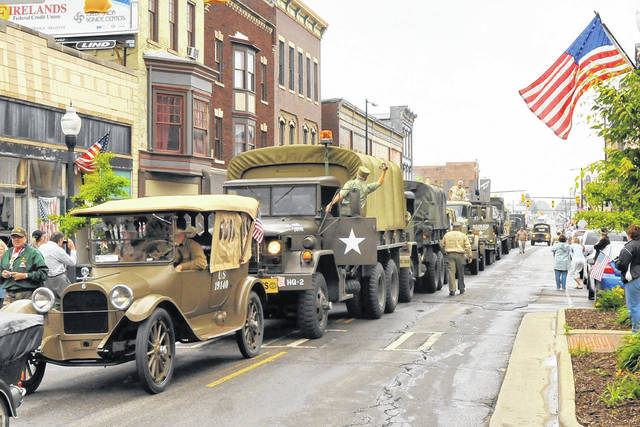 The Military Vehicle Preservation Association is sponsoring a reenactment of the 1919 military convoy that traveled across the Lincoln Highway, from the East Coast to the West Coast, to celebrate the victory in World War I. The 2019 MVPA Transcontinental Convoy got on the road August 10th in York, PA and end September 14th in San Francisco, CA. If you are wondering where the Convoy is at any moment, click on this link for the Live Convoy Tracker.

Galion, being located on the Lincoln Highway at that time, was one of the convoy’s stops, as it was in 2009 on the 90th anniversary of this special celebration.

The convoy is expected to be in Galion sometime around mid-morning Saturday, Aug. 17.

The Military Vehicle Preservation Association has invited its members and their various historical military vehicles to participate in this grand convoy re-enactment. It leaves Washington D.C. on Aug. 10. The group will bivouac in Wooster. before coming through Galion about mid-morning on Saturday, Aug. 17.

Expected to participate in the coast-to-coast tour — about 3,200 miles — are more than 50 Historic Military Vehicles. Another 20 or so vehicles will participate in different portions of the trip.

The convoy will follow the original Lincoln Highway route as closely as possible. That route crosses all or part of 11 states from Washington D.C. to San Francisco, joining the Lincoln Highway in Gettysburg, Pennsylvania. The route begins on the lowlands of the eastern seaboard, traverses the rolling hills of Pennsylvania, travels the lush farmlands of the Midwest, crosses the high plains, dips into the Great Salt Lake Basin in Utah, crosses the Nevada Desert, climbs the Sierra Nevada and descends to Lake Tahoe. It will end in California and the San Francisco Bay area.