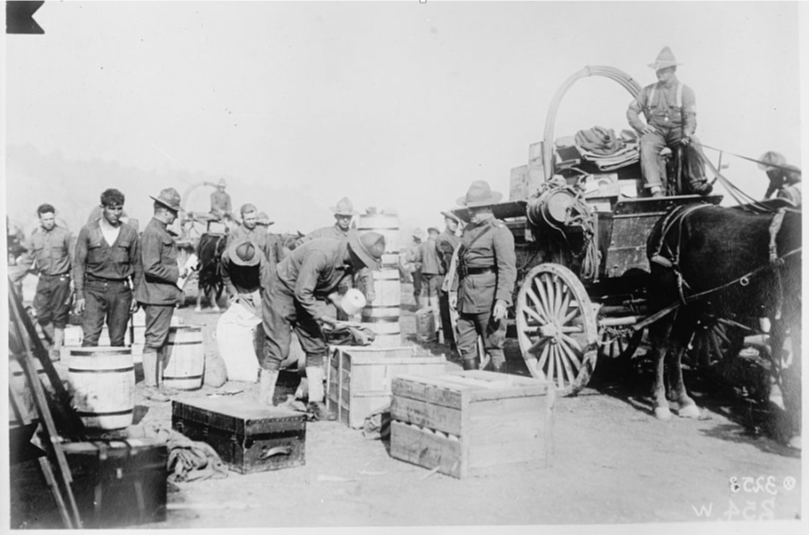 1918 photo of Quartermaster Supply unit in France. (Courtesy of Library of Congress)

“Letters from Over There” by Lt. Scott of Armstead, Montana

2nd Lt Parke Tolman Scott, was standing outside the Quartermaster’s office when he spotted his corporal returning with dispatches, memorandum and requisition forms. The 25-year-old gas and oil officer for the AEF Quartermaster Depot in France on the Western Front re-entered his office and picked up the outgoing mail which included two letters addressed by Scott’s own hand. One was a letter to his parents, Mr. James Wallace and Laura Tolman Scott of Armstead, Montana. The other letter was addressed to Francis Foote, the current editor of the Dillon Tribune in Beaverhead County, Montana.

He opened the letter to the editor and scanned the contents for the last time. Then with quick motions, Scott tore that letter into small pieces which he dropped into a metal tray. Lighting a match he quickly turned the scraps into ashes. American postal censorship was serious business. It came into being when the United States declared war against Germany on April 6, 1917. In the US Army, letters were scrutinized by three levels of censors: the company, regimental and base censors, before they reached the “acceptable” stage and were released for “overseas delivery.”

There were at least ten different items that could not be included in letters to the home front, including the names of the soldiers or officers who were killed or wounded in action, in hospital or captured by the enemy. Details of planned attacks were strictly prohibited, and no details were allowed about the exact location of troops, tanks or artillery. Enlisted men were to place their unsealed envelopes in the organization mailbox, and officers had to seal their envelopes and sign their names in the lower left hand corner to show their compliance with the censorship regulations.All intercepted communication, both military and civilian were forwarded to Military Intelligence in Washington.

Being an officer himself meant that 2nd Lt. Scott had to censor some of the letters of the soldiers under his command, and in the current situation he destroyed his own letter instead of giving it to the censor. Scott saved the emptied and pre-addressed envelope which he then used to enclose a small note addressed to Editor Foote, along with a notice to be published in the newspaper for his readers at the Dillon Tribune.

I had a dandy letter written the other day. It was a long one too, but after I read it over, I decided that there was too much military information in it so it didn’t get sent out. I guarantee that the replacement for the next installment of Dateline France: “Letters from Over There” will be worth the wait.

Proud of his deep western roots, Scott hailed from the bucolic community of Armstead (population 97) sited near the Continental Divide in Beaverhead County, Montana, with magnificent landscapes that emphasized the beauty and the isolation of his home town. His DATELINE FRANCE: “Letters from Over There” postings to the Dillon Tribune originated from his desire to reach out to his family and community with news about the war front and commentary that was in keeping with the American Expeditionary Forces’ strict military and security needs.

The column were published every other month in the Dillon Tribune under the subheading: “Lieut Scott writes about many things of interest In France, and was eagerly awaited by his audience despite the snails pace of the surveilled and sometimes censored mail of the American Doughboys. Here is an excerpt:

1. I sure am alive and ready to fight the world, but I have been pretty slack about letting you know it. To tell the truth, it has been about a week since I have had any desire to fight anything. Here’s why:

2. The whole outfit was hit by a wave of influenza and it has been real comical to see who could get it next. My outfit all had it, but they very kindly took turns so we (the gas and oil depot) didn’t have to close up business.  It only puts you to bed, one or two days and makes you feel bum three or four more. It is worse than the grippe because it hits harder all at once. Oh well, we are alright again now.

2nd Lieut.Scott originally downplayed the seriousness of influenza in his June 3,1918 letter home in order to avoid unnecessarily alarming the general public about a malady that unfortunately became a pandemic in America and throughout the globe. According to the website www.Army.mil, the number of Americans killed in action (KIA) during World War 1 totaled 53,402. With new information about the Influenza Pandemic, the number of Americans that died of influenza and influenza related cases of pneumonia may be more than 45,000. In a later letter, he again employs a little macabre humor when he wrote: “Well, we are all fine and cheerful again after our dose of influenza.”

Scott inserted some humorous aphorisms throughout his column including “There are some things you can’t get from the French...You can’t get a good watch or a good fountain pen.”

He also gave many thanks to his most devoted fans: “The Horse Prairie Club is right on their job. I don’t know what I can do to let them know how much I appreciate their letters.”

Scott also included an appeal for more letters from his fans and readers in Beaverhead County: “I believe it has been ages since I heard from the rest of you folks. Don’t you forget that I eat up letters over here!”

Time quickly passes, and the Armistice is near, Because of the delays in getting the mail from France to the United States, this last posting from 2nd Lieut. Parke T. Scott is dated November 7, 1918 but in reality it was printed in the Dillon Tribune almost a month later on December 6, 1918.

Folks, I’m not dead. In fact I’m very much alive, but my gosh I’m busy. This peace talk may be all right for some folks but if it sure doesn’t seem to cut down on our business any. We are still dealing out gas and making improvements around our homestead and we will be until we are ordered away.

The “Spanish Flu” didn’t hit us hard here and we consider ourselves a mighty lucky bunch. One of our men had a mighty bad case of grip and I was sure afraid it was the “flu” but no other cases showed up so we figure we are safe. Colds are mighty common among my men because of the rain and “wet walking” but most of us are on the job the biggest part of the time.

I have two offices now and am running from one to the other and back most of the day. I am either the railhead officer or the gasoline officer. There is one good thing about it and that is the automobile. Whenever the corporal drives me I pass an awful bunch of lieutenants and captains walking.

Peace rumors are sure thick today, and they sound sort of substantial, too. Maybe we wouldn’t be happy if they let us all come home soon. When the armistice is signed, I will tell you about the wonderful trenches and dugouts around St. Mihiel. It sure would make a good reading book.

I must quit now. Good night.

The end of the war finally arrived, but the Quartermaster Corps were some of the Americans who had work to do in Europe before their inevitable return to the United States. Documents for Parke show that he was promoted to 1st Lieutenant QMC on February 24, 1919 and finally sailed from Brest, France on the USS Cap Finisterre (a 14,503 ton troop transport) to New York. He was discharged from service at Camp Dix, New Jersey on July, 15, 1919.

Parke was given the usual “Hero Welcome Home celebration upon his return to Armstead, but life had a few more challenges in store for him and his family. His father, James was ailing and died in 1920 at the age of 66. It was up to Parke to take over management of the ranch and the sheep raising operations. There were happier times when Mildred Cornutt became his wife in 1926 at Bozeman and they raised a family of three sons. Parke fully supported his widowed mother’s work with the help of the DAR to identify and preserve heritage sites in Beaverhead County that commemorated the success of the Lewis and Clark exploration with parks, historical markers and designated a 140 acre area as a memorial to Sacajawea. When his mother, Laura died on November 10, 1937 at the age of 80, Parke continued to celebrate the annual picnics at Sacajawea Park to honor her memory.

He looked forward to continued work before settling into retirement and the usual round of board memberships and numerous leadership positions including Commander of the American Legion Post 20. Parke served as an officer with the Federal Land Bank for 22 years and gave his time and donations to many worthy causes including the Masonic Lodge, Eastern Star, and the Beaverhead Wool Pool. Then tranquility disappeared as he, his family and the other residents of Armstead were given a few years to prepare for a forced move from their still-thriving community. In 2017, while researching Parke’s remarkable life at the Beaverhead County Museum in downtown Dillon...I found files of documents on the planned “inundation of Armestead.” In the 1950s, issues surrounding water and the need to construct the Clark Canyon Dam and the resulting reservoir came first. Armstead was in the way, and it had to be flooded. The move was accomplished as Parke and Mildred’s family and other former Armstead residents moved to Dillion or other parts of Beaverhead County. The construction of the dam took place between 1961-64. At times, when the water level is low, parts of the inundated town became visible.

On July 12, 1974, Parke “headed West” and left for that final Doughboy reunion in the sky, surrounded by his wife, his grown children and their families who sat vigil with him at Barrett Hospital in Dillon. Reverend Herbert Hoover of Missoula officiated over funeral services in Brundage Chapel. !st Lieut.Parke T. Scott was buried with all military honors at the Mountain View Cemetery in Dillon with the American Legion conducting the graveside rites. Survivors in addition to his wife included his sons and daughters-in-law, Mr and Mrs. James Walter Scott of Helena,Mr. And Mrs Daniel C. Scott of Dillon, and John Parke of Yorba Linda,
California and twelve grandchildren.