Augustine J. Ouellette originally was rejected by the United States Army when he attempted to join other Middleboro men, who were serving with Company D 101st Infantry at the Plymouth Armory. 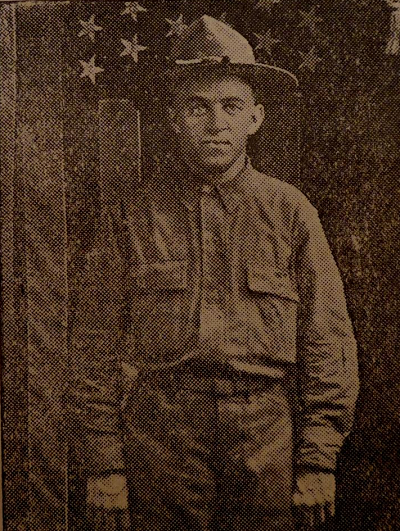 Augustine J. OuelletteHe was the son of Mr. and Mrs. Arthur Ouellette of 70 Everett Street. At the time of his enlistment, his identification card sent to the Middleboro’s Commercial Club stated he was 24 years old. He had been employed at the Leonard & Barrows factory prior to joining the service.

According to a letter from Ouellette sent from France in March 1918, which stated that he had been able to enlist with company H of the 23rd Infantry of the American Expeditionary Force. “After trying to enlist in Co. D of Plymouth last April but was turned down for being too short. I went to Boston and sailed for France on a horse boat. On my return....went to Allentown (PA) and on the 26th of June, 1917, I enlisted in the U.S. Regulars and was sent to Columbus, Ohio and took the oath. He was mustered in on July 1, 1917.”

A news account in the Middleboro Gazette with Augustine’s picture reported that he arrived in France on September 2. The story also mentioned that he had “seen much fighting.” The article also mentions that he had been promoted to “first class private” and had transferred to the 31st Prisoners of War Escort.

A second letter, addressed from France to the Service Committee of Middleboro’s Commercial Club dated April 18, 1918 and postmarked April 30 by the Army Postal Service, was sent by Ouellette.

Parts of that letter read: “I received five letters from the states last night and believe me I did not take very long to read them and it made me sleep better all night. Have not received any packages that you sent me last November or the one that the Red Cross sent to me.”

“You didn’t have my right address. Last year when I tried to enlist in Company D. of Plymouth, I did not pass.” Ouellette’s letter then mentions that he was serving with the 23rd Infantry and that his parcels may have been shipped to Company D.

Ouellette’s letter then informs the Service Committee, “The hardest things to get here is tobacco and playing cards. If you care to send any, why I will be happy. As it is hard to get along without tobacco and it I hard to buy any French tobacco as they have very little.” He continued, “I will close with best wishes to all Middleboro and hoping from you soon.”