War in the Sky: Medal of Honor Recipient Erwin Bleckley 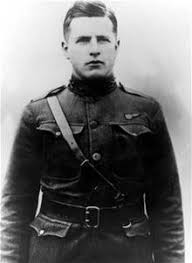 2nd Lieutenant Erwin Bleckley posthumously received the Medal of Honor for his efforts to locate the men of the Lost BattalionIn August 12th's edition of the World War I Centennial News Podcast, Episode 135, we reprised an earlier interview about a heroic but largely unknown American serviceman. As the Lost Battalion fought for their lives in the fall of 1918, a group of Airmen risked their lives to relocate and resupply them- the first such mission in American military history- including 2nd Lieutenant Erwin Bleckley. Here is his remarkable story, as told by historian Lieutenant Colonel Doug Jacobs, U.S. Army (Ret.). The following is a transcript of the conversation, lightly edited for clarity:

Theo Mayer: For our next segment, I'd like to introduce you to Erwin Bleckley. He's one of the aerial heroes of the Lost Battalion saga, a name that's not that well known in aviation history. To tell us the story of Erwin, we're joined by Lieutenant Colonel Doug Jacobs, US Army (Retired). Doug is the former command historian and curator for the Kansas National Guard Museum. He's also an Erwin Bleckley biographer who spent years researching this man and his story. Here is a conversation I had with Doug in September of 2018 during Episode #91. Doug, welcome to the show.

Doug Jacobs: Thank you, Theo. I appreciate being here and an opportunity to talk about a subject that is very dear to my heart and I feel a lot of passion for, and that is the story of Erwin Bleckley.

Theo Mayer: Who is Erwin Bleckley?

Doug Jacobs: Well, Erwin Bleckley has a unique story in that he was a man that enlisted in the Kansas National Guard from Wichita, Kansas. He was the second man to join the first field artillery battery that was just formed in Wichita. He received a commission, and 30 days after, that unit was mobilized to go to war. It was made part of the 130th Field Artillery regiment which is part of the 35th Division. It's a National Guard unit made up of members of the Missouri National Guard and the Kansas National Guard. I know about Erwin because I've spent about 25 years of my life studying him.

During World War I, he is one of four Air Service members that received the Medal of Honor. He went to war. He learned his job as a forward observer. When they got to France, they'd asked all the forward observers to consider being forward observers in airplanes. The airplane was used for the first time as a combat platform during World War I, and so it was a lot about learning as you go. Now, you have to remember that the Air Service was the forerunner of the Army Air Corps, and in 1947, that became the Air Force, so I guess the lineage goes back through the Air Force to this young man who was in the Kansas National Guard as a field artillery. It's a unique story in that respect.

I really can't tell the story of Erwin without talking about the pilot of the airplane that he was in, and that was Lieutenant Harold Goettler. Harold Goettler was an aviator from Chicago, Illinois. They were assigned to the 50th Aero Squadron, and their job was to support the 77th Division in the Meuse-Argonne. The 77th Division had the unit that became known as the Lost Battalion. The Lost Battalion really wasn't lost. They were pretty much where they were supposed to be. But on the morning on the 5th of October, the commander of the 77th Division had asked the 50th Aero Squadron to see what they could do about contacting them, try to resupply them, and see if they could find out what the commander needed as far as support.

When they got to the coordinates that they were given, they could not find the guy. What they found was a bunch of enemy soldiers firing back at them. Important to note that it was actually a team effort by the 50th Aero Squad to save the Lost Battalion. They all worked together, the maintenance people, the supply group. Bleckley had suggested that they might use a process of elimination to locate where the unit actually was at by drawing fire from the enemy. So they would fly down the ravine real low, and if the men on the ground shot at them, they would mark that map. Basically using themselves as bait to locate where they were being shot at from the Germans in order to find the spot where they weren't being shot at by the Americans.

The 50th Aero Squadron did 13 sorties to that area, dropping supplies. It was the following day on the 6th of October that a flight crew by the name of Anderson and Rogers flying the number 16 airplane actually were able to report the location where they were at. A lot of planes got riddled with bullets. As a matter of fact, two planes before Harold and Erwin's plane, did not make it back that day. Erwin's plane was the last one, and they did not make it back because they had crashed in the process. He gave his life in order to save these guys on the ground.

Now we have to remember, this is the first time in the Army Air Service that they ever attempted to drop supplies to combat units on the ground, and they did not know exactly how to do it. There's been a lot of arguments about whether or not they were successful in saving the Lost Battalion, whether or not they were successful in getting the packages on the ground. In fact, the package they did drop, the ones that landed on the ground, did get into the soldiers' hands. They just happened to be the wrong soldiers. They did locate the unit. They were saved the next day. But the most important thing that the aircraft crews did flying over was to give the guys on the ground hope that somebody was looking for them. It's because of that they were able to hold out just long enough for the units to come in and rescue the Lost Battalion.

Theo Mayer: Doug, you're bringing a really interesting and somewhat unknown story to us. Thank you so very much.

Doug Jacobs: All right, thank you.