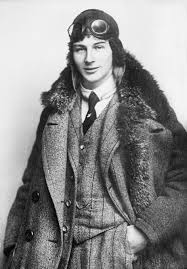 Anthony Fokker, a Dutch aircraft designer, pioneered the Interrupter Gear for GermanyFrom August 12th's edition of the World War I Centennial News Podcast, Episode 135 (originally aired in Episode 68): At the beginning of World War I the airplane had yet to realize its lethal potential as a weapon of war. One major hindrance to aerial combat was the difficulty of firing a forward-mounted machine gun on a propeller plane without destroying the propeller itself. Then in 1915, a Dutch engineer named Anthony Fokker changed the world with his revolutionary "Interrupter Gear." Read on to learn more about this deadly invention:

Theo Mayer: An arms race in the sky was inevitable as each side tried to improve the capability, reliability, and the lethality of planes. Believe it or not, the first gunfire in the air involved pilots just pulling out their service revolvers and popping off at each other. Aiming the plane and shooting where the plane was aimed was a big deal. The first attempts to mount a machine gun on a plane ended with the heavy nose prototype crashing on its first experimental flight. As we said, those early planes were not very powerful flyers. Beyond that, mounting a machine gun to shoot forward without shooting off your own propeller was a really big challenge.

They tried a lot of ideas. Some guns were mounted very high on top of the wings. Some planes carried a second man, a machine gunner who whipped around his weapon on a swinging tripod. There were pusher planes with props behind the wings allowing the pilot to aim the plane forward and shoot without hitting the blades of the propeller. But pusher planes were slow and less maneuverable.

Enter Dutch aircraft designer, Anthony Fokker, who came up with the ultimate answer. Unfortunately, he did it for the Germans. His mechanism, referred to as an interrupter gear, connected the firing of the machine gun with a turning of the propeller allowing the bullets to pass through the brief gap between the blades as they spun. Now in spite of the tests on both the ground and in the air proving that his design worked, German generals remained skeptical. They demanded that Fokker prove his idea by going out on a mission and shooting down an enemy by himself. That's pretty harsh in my book. Fokker saluted and did as he was told. Pretty soon a French plane came into his sights, but that poor Fokker found himself unable to pull the trigger. He was an engineer not a warrior.

Fokker returned to the flying field and told the generals he couldn't do it. Someone else was going to have to test the plane. And so it was that the German pilot who would become Germany's first ace and who would be known as the father of air-to-air combat. Lieutenant Oswald Boelcke was the first pilot to successfully use the interrupter gear to shoot down another airplane on August 1st, 1915. With that innovation, the German planes would continue to dominate the skies, a phenomenon known as the "Fokker Scourge" until mid-1916. The interrupter gear, a technological marvel that brought air combat into the future. Now we've put links in the podcast notes for you, and R.G. Head's book about Boelcke, more information about interrupter gears, and a very cool YouTube video from the Slow Mo Guys that shows you an interrupter gear operating in really, really slow motion. Check it out.