War in the Sky: Mark Wilkins on Pilots and PTSD

In August 12th's edition of the World War I Centennial News Podcast, Episode 135, (originally aired in Episode 66) we heard from writer and historian Mark Wilkins on the high incidence of shell shock, or PTSD, among WWI pilots. Held up as fearless and daring, these men cracked underneath the extraordinary danger of their occupation. In his research Wilkins uncovered many letters written by the pilots themselves that illustrate the toll aerial combat took on their psyches. Read on to learn more about PTSD and the effect it had on WWI pilots, in their own words. The following is a transcript of the conversation, lightly edited for clarity: 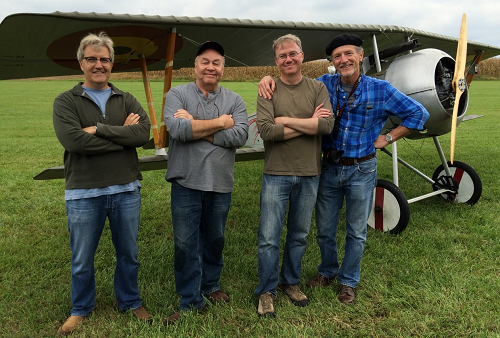 Theo Mayer: Shell shock is a term that was first heard in World War I and was often treated as cowardice or even treason. It was really the equivalent of what we recognize today as post-traumatic stress disorder or PTSD. We normally think of shell shock as an infliction for those affected by horrendous barrages of artillery fire and machine guns on the battlefields and in the trenches. It turns out that pilots apparently suffered greatly from PTSD. Here is Mark Wilkins, historian, writer, museum professional, and lecturer. Welcome to the podcast, Mark.

Mark Wilkins: Thank you. Glad to be here.

Theo Mayer: Mark, to start with how did you get the trove of letters you used for your research?

Mark Wilkins: Well, research as you know, is a treasure hunt. It's intuitive, and sometimes information is found in the most unlikely places. That being said, there's some recent books that have collections of pilots' letters. University and national archives are another great source as are aviation museums or war museums like the Imperial War Museum in London. Local historical societies, sometimes relatives of the pilots, also online newspaper and periodical archives are another fabulous source for information.

Theo Mayer: Mark, about how many letters do you think you went through to start to do your research?

Theo Mayer: In World War I, malady was equated with physical issues, but your article deals with the psychological stresses of the pilot's experience. Last year we were telling stories about soldiers being executed for shell shock on charges of cowardice. How did that play out for the pilots?

Mark Wilkins: Well, the field of aviation psychology, so-called, evolved symbiotically with the war. Psychiatrists were initially split about the causation of shell shock, for example. Some thought it was a purely physical phenomenon. Whereas others thought it was psychological. This began a debate that actually didn't conclude until around, I think, 1922. The military finally opted for the latter definition that it was psychological because this allowed them to either be returned to the trenches or the cockpit. This was important because with the epic casualty tolls mounting, they really needed every man. I'm not aware of any pilot being shot for cowardice. Although when cowardice was observed, the offending pilot was severely reprimanded or transferred. You have to remember they're trying to build these guys up as basically rock stars. The trench warfare was not going well, and these guys that flew these one-on-one jousting in the skies, I mean this was something that gave the men in the trenches hope, so they didn't want their image tarnished. Many internalized the struggle. In the British squadrons, it was understood that you kept a sunny disposition in front of the men, but you could privately go to pieces.

Theo Mayer: Well, the stress on these aces actually makes a lot of sense. If you were an ace, you flew a lot, and the mortality rate of your buddies is off the chart. You don't have like you do in a trench, you've got the courage of the guy to your left and the guy to your right to bolster you. But this is kind of a white knuckle, cold sweat daily solo experience, so it sounds like traumatic stress is inevitable. How common was it?

Mark Wilkins: Among those who talked it- you have to remember that many didn't- it was very common. Elliott White Springs, who was an American who flew for the RFC, the Royal Flying Corps, in the 85th and 148th Squadron, basically said, "It's only a question of time until we all get it. I'm all shot to pieces. My nerves are all gone, and I can't stop. Few men live to know what real fear is. It's something that grows on you day by day that eats into your constitution that undermines your sanity." Let me give you another example. Squadron leader Cecil Lewis wrote, "I realize not then but later while pilots cracked up, why they lost their nerve and had to go home. Nobody could stand the strain indefinitely. Ultimately it reduced you to a dithering state near to imbecility. They send you home to rest. They put it in the background of your mind, but it was not like a bodily fatigue from which you could recover. It was sort of a damage to the essential tissue of your being, and never, once you have been through it, could you be quite the same again." 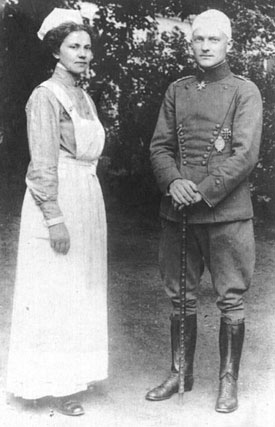 Germany's feared Red Baron, Manfred von Richthofen, seemingly suffered from PTSD after being wounded in the headTheo Mayer: Well, so Mark, after immersing yourself in all of this, can you give us one example of what your biggest takeaway is from this?

Mark Wilkins: Well, it's a complex notion. It was a bittersweet experience to find easy explanation or quantification. From Arthur Gould Lee, Lee after the war reflecting, he goes back to the Western Front. He's standing by the corner of a chateau and he says, "In the sunshine by the waving grain with everything now at peace I remembered them and was filled with a heavy sense of loneliness. I knew that although I had not been killed, something in me had. Something had gone out of me and was buried and would always be buried in 100 cemeteries in France and in England along with the companions of my youth who had died that our country might live."

Theo Mayer: We just had a great question come in from our live audience. Frank Crohn wants to know if Richthofen, Germany's Red Baron, appeared to suffer from PTSD.

Mark Wilkins: Yes, he did. He was a fearless pilot, but he was wounded in the head. He suffered a head wound, and after that he changed. He became a little more cautious, a little bit more protective of his pilots. He basically realized that mortality was something that could happen to him. The problem is we can only deduced what happened based on the letters that many of these guys wrote. Red Baron, even though he wrote an autobiography, he doesn't really talk about much of that stuff. His mother basically is the one who commented on his condition and his temperament had changed after he was wounded.

Theo Mayer: Last December, we had filmmaker Darroch Greer on the show about his upcoming film about the Lafayette Escadrille and doing a documentary. You're involved in that project, aren't you?

Mark Wilkins: That's right. I'm the producer of aerial effects and a historical consultant for the film. Basically as a producer for aerial effects, I line up venues for shoot so that the aircraft I mentioned, we did one at the Golden Age Air Museum filming replica Nieuport 17s and a German two-seater and simulated controls and dog fight segments. In addition, I've built a few large-scale actually radio-controlled models. These will stand in for what we can't do with full-scale aircraft. As a historical consultant for the film, I'm helping out with historical big-picture aspects. Really the trick with this is to locate it within the greater framework of the war so the viewer not only sees this particular story in great detail but is also able to see where it fits within the big picture, the major battles and political trends of the war.

Theo Mayer: Thank you for coming on the show and giving us the story and the article.

Mark Wilkins: Well, thank you for having me.

Theo Mayer: Mark Wilkins, historian and writer, penned an article about World War I pilot PTSD for the Smithsonian Air and Space magazine. He's going to be releasing a book in September of 2019 called Aero-Neurosis: Pilots of the First World War and the Psychological Legacies of Combat.