GREENSBORO — At N.C. A&T, like at most universities, the buildings are named for people who played important roles on campus.

The original main building is named for a past A&T president. So, too, are the library, the current administration building and four academic buildings. 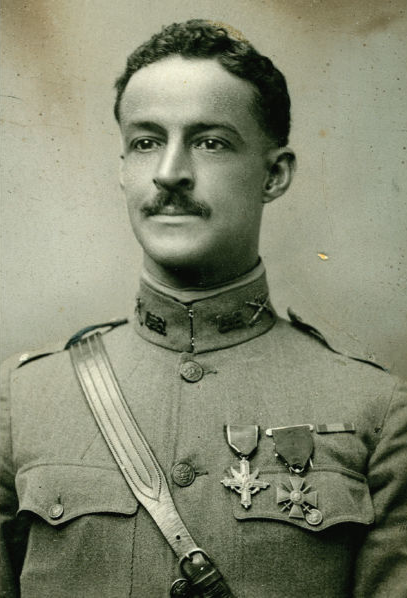 Lt. Robert CampbellAnd then there’s Campbell Hall, home of A&T’s ROTC programs since 1955. The building’s namesake, Robert Campbell, wasn’t a college president or a dean or a major donor. He became the university’s first instructor of military science way back in 1919.

But Campbell was so much more than just a college instructor. He held a patent for an invention he came up with while in college in Alabama. He fought in the Spanish-American War and again in World War I, where he was honored by two different governments for his bravery under fire.

A century ago this fall, Campbell received one of France’s top military medals in a ceremony that made national news. A program August 17 at the Greensboro History Museum commemorated Campbell’s life and service.

Campbell was a well-known figure around the A&T campus long after the war ended, said James Stewart, the archives and special collections librarian at A&T’s Bluford Library.

“He was the definition,” Stewart said, “of an officer and a gentleman.”

Robert Lee Campbell was born in 1875 in Athens, Ga. Little is known about his early life until he enrolled at the Tuskegee Institute, now Tuskegee University. At the historically black school in Alabama, he studied to be a machinist.

Campbell left school in 1899 to enlist in the U.S. Army during the Spanish-American War. He served for two years in the infantry in the Philippines. He returned to Tuskegee in 1901 as a sergeant.

Two years later, Campbell was awarded a patent for a valve gear for steam engines. He shared the patent with Booker T. Washington — yes, that Booker T. Washington, Tuskegee’s first president and one of the nation’s top black leaders more than a century ago.

Read the entire article on the News & Record web site.