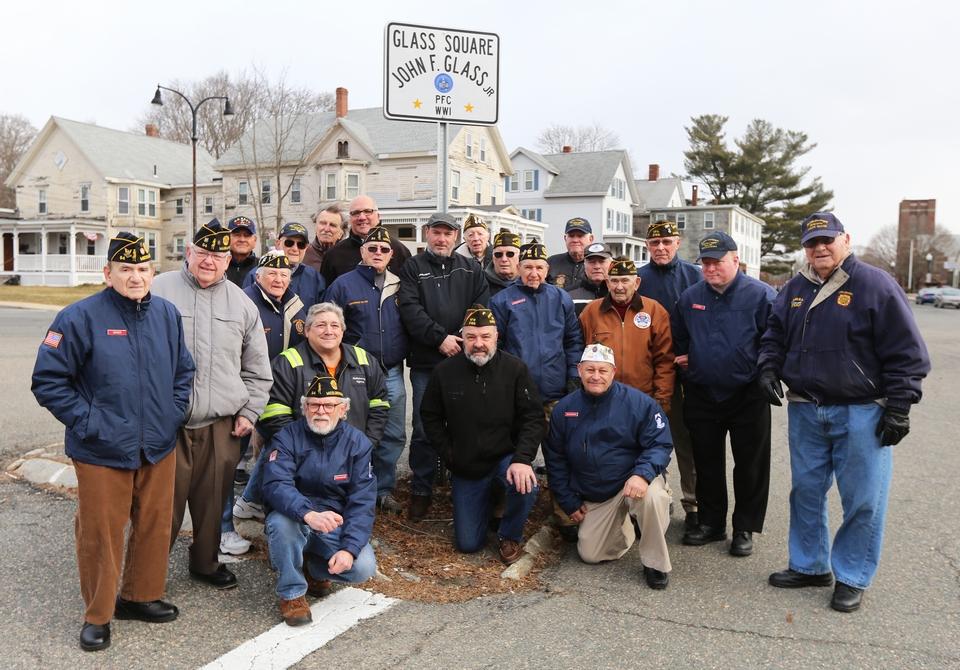 Members of the Simeon L. Nickerson American Legion Post 64 in Middleboro and a number of other local veterans and town officials gathered at Glass Square in downtown Middleboro last Thursday to dedicate a new sign memorializing the late John F. Glass, Jr,. who was the last service man from Middleboro to be killed in action in World War I. The spot has long been known as Everett Square, but Post 64Commander Bob Lessard and a number of other local veterans led a decade-long push to have the square rededicated in keeping with a 1929 Town Meeting vote which established he spot as Glass Square.

MIDDLEBORO — The somewhat disorienting five-way intersection located at the top of Center Street in downtown Middleboro known locally as Everett Square is due to be redesigned in 2020, but before that, Everett Square had to be renamed, or better yet, reestablished, as John F. Glass, Jr. Square, as it was always supposed to be.

That happened with little or no resistance from those partial to the name “Everett Square,” which in all likelihood was named so for no other reason than its proximity to Everett Street, one of the five intersecting streets converging at the Square — along with Station St., High St., Center Ave and the aforementioned Center St.

Well, that redesign got an early start last Thursday with the unveiling and dedication of a new sign recognizing the square as John F. Glass, Jr. Square, and for Bob Lessard, current Commander of American Legion Post 64 in Middleboro, it’s a small gesture that will go a long way in correcting a bit of local history and acknowledging, for all time, a Middleboro soldier who paid the ultimate price while serving his country.

“He died October 26, and the war ended Nov. 11. So, the poor guy got killed just a couple of weeks before the war ended,” Lessard said, relaying the story of PFC John F. Glass, Jr at the dedication.

PFC Glass was the last serviceman from Middleboro to be killed in action in World War I. At the time of his death, he was serving with the Yankee Division’s 101st Infantry, Company D. His remains did not make it home to Middleboro, and he is buried in the Meuse-Argonne American Cemetery in France.

Lessard, who’s been leading the call for the correction for the better part of a decade, says Middleboro American Legion Post 64 membership petitioned to have the square memorialized in the name of John F. Glass, Jr. back in 1929. The spot was dedicated and took the name of John F. Glass, Jr. Square on May 30, 1929, part of that year’s Memorial Day services, and later that spring, on June 18, the request to make it official and put it on the books was approved by Town Meeting voters.