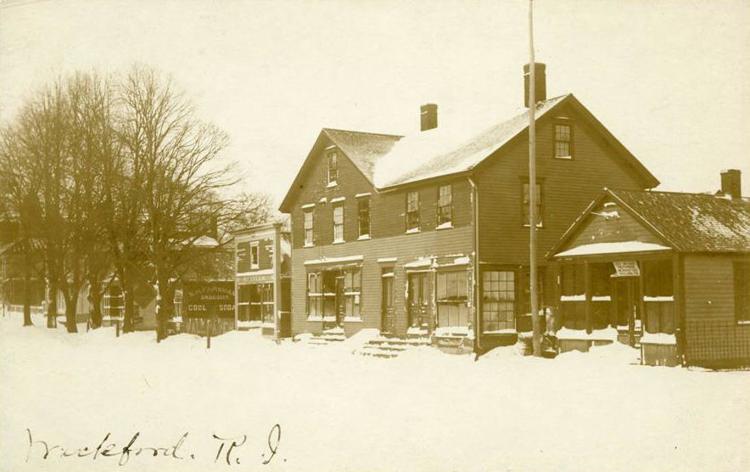 A circa-1920 photo shows Ryan’s Market on Brown Street in Wickford, RI. The market added pleas and reminders in its advertising during World War I to save peach pits and nut shells for Allied soldiers’ gas masks.

Peach pits, nut shells, and how they helped us win the Great War

A month or so ago, we took a look at something as innocuous and unassuming as the lowly bootscraper and tried to see what it might tell us about history on both a local and larger scale. This week, we tell the tale of the seemingly inconsequential peach pit and its equally unimportant companion – the discarded nut shell – to see what historic part they played in World War I.

You see, the first great global conflict caused certain unexpected problems. One of the most demanding was dealing with shortages of critical raw materials. If your enemy had control of the territories where certain crucial raw materials were found or produced, well, you were soon going to either be in trouble, or get creative and come up with an alternate source of material. The rubber shortage of World War II is a classic example. The Axis powers controlled virtually the entire rubber growing world, and the Allies had to get creative. After a lot of recycling, a short period of head scratching and pondering, and a little American ingenuity…Voila! Plastics are born and the rest is history.

World War I’s problems included dealing with the fairly new and very potent threat of German gas attacks. Gas masks were the answer and the problem was their main component: activated carbon and its limited availability. Again, after some heady pondering and some serious head scratching, American and British scientists and engineers found the solution right under their noses. Fruit stones and nuts shells, burned slowing in a controlled fashion, were the perfect source for activated carbon. Now the problem was getting enough of these common everyday items together to do the job. After all, it took 200 peach pits or 2 pounds of nut shells to produce enough carbon to outfit one gas mask.

This is where smalltown America and Britain came in. All across these two nations, the call went out to save and stockpile these items. The lead was taken by none other than the International Red Cross and the U.S. Department of Agriculture. Schools, churches, Boy Scouts and Girl Scouts all got involved. Post offices such as the ones in Wickford, Hamilton, Davisville, Lafayette and the like were used as collection points. The big “Do Your Bit – Save the Pit” campaign was off and running.

Read the entire article on the Independent Newspapers web site.