Commission meets with Congress to increase visibility of commemoration

A delegation from the U.S. World War One Centennial Commission visited Capitol Hall July 21-23, meeting with Representatives and Senators to increase Congressional visibility and support of the  Commission's efforts to commemorate and educate the U.S. public about the service and sacrifices of Americans during WWI.

The delegation was led by the Chair of the Commission, Colonel Robert J. Dalessandro, USA (Ret.) and Commissioner Tom Moe, and includes the Commission's senior advisor for development, General Barry McCaffrey, USA (Ret.). The visit to the Hill kicked off with a brief media event on Tuesday, July 21, taking place on the east side grassy area outside the U.S. Senate at 10 a.m. EDT. The event featured remarks by General McCaffrey, Representative Ted Poe, R-Texas, and Dalessandro.

The delegation visited the offices of 34 different Representatives and Senators for meetings. Among those lawmakers hosting with the Commission team were: Speaker of the House John Boehner (R-Ohio); Senator John McCain (R-Arizona), Chairman of the Senate Armed Services Committee; Senator Harry Reid (D-Nevada), Senate Minority Leader; and Representative Hal Rogers, Chairman of the House Appropriations Committee. 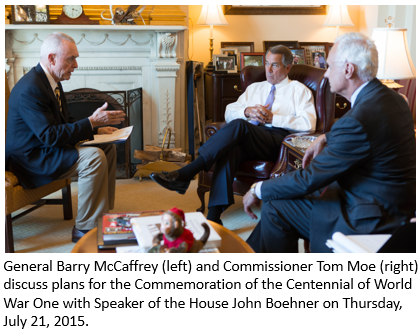 World War One was a terrible global conflict that was fought between July 28, 1914, and November 11, 1918. Some fifty countries were involved in fighting that spanned across Europe, Asia, and Africa, and on the seas around the world. The United States entered the war on April 6, 1917. During 18-months of American involvement, over four million Americans served in the military, and two million of them deployed overseas. 116,516 American service members died during the war, and 204,000 more were wounded. The United States played a significant role in the peace afterward, helping to shape the Treaty of Versailles.

The war, and its aftermath, made enormous impact on the world - it dramatically shifted national borders, it brought new technology to industry and transportation, it changed attitudes toward women in the workplace, and it created new movements in the arts. The war’s effects are still with us, today, one hundred years later.