Henry Johnson, the One-Man Army Who Fought Off Dozens of German Soldiers During WWI

By Jake Rossen
via the Mental Floss web site

It was after midnight on May 15, 1918 when William Henry Johnson began to hear the rustling. Johnson was a long way from his home in Albany, New York, guarding a bridge in the Argonne Forest in Champagne, France. Sleeping next to him was Needham Roberts, a fellow soldier. Both men had enlisted in the New York National Guard just a few months earlier and were now part of the French Army, donated by U.S. forces to their understaffed allies in the thick of World War I. 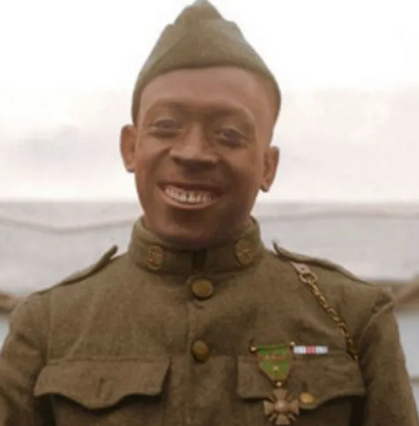 Henry JohnsonAs Johnson continued hearing the strange noises late into the night, he urged his partner to get up. A tired Roberts waved him off, believing Johnson was just nervous. Johnson decided to prepare himself just in case, piling up his assortment of grenades and rifle cartridges within arm's reach. If someone was coming, he would be ready.

The rustling continued. At one point, Johnson heard a clipping noise—what he suspected was the sound of the perimeter fence being cut. He again told Roberts to wake up. "Man," he said, "You better wake up pretty soon or you [might] never wake up."

The two began lobbing grenades into the darkness, hoping to discourage whoever might be lurking around the perimeter.

Suddenly, in the middle of the French forest, Johnson saw dozens of German soldiers come charging, bayonets pointed toward him. They began to fire.

What transpired over the next hour would become an act of heroism that prompted former President Theodore Roosevelt to declare Johnson one of the bravest Americans to take up arms in the war. Johnson would even lead a procession back in New York City, with crowds lined up along the street to greet him.