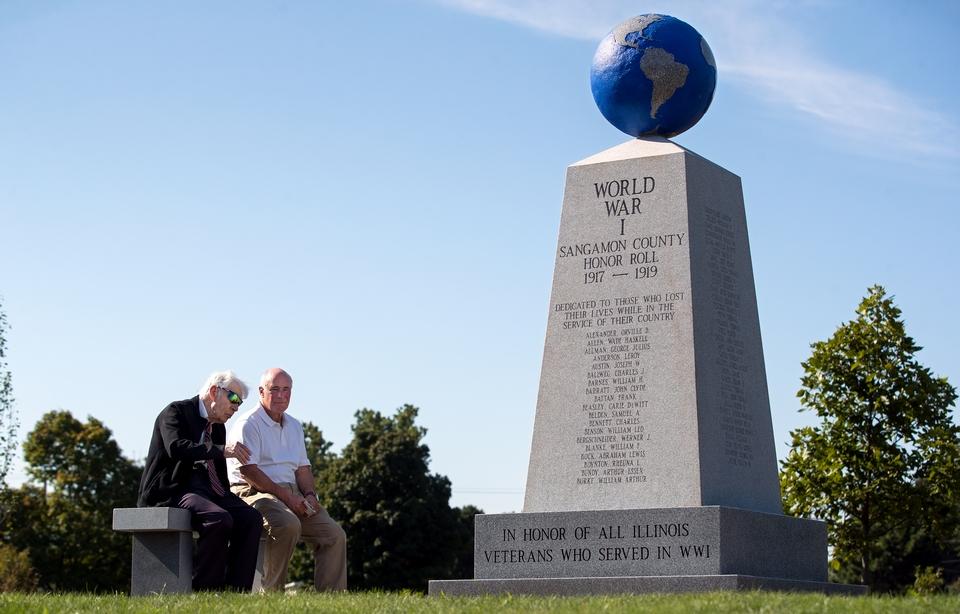 John Kerasotes, left, talks with his son Denis as they sit at the World War I memorial that had just been transplanted near the other war memorials at Oak Ridge Cemetery Tuesday. John publicly revealed himself to be the anonymous donor that paid for the memorial that was originally erected at First Street and North Grand Avenue in Springfield in 2003. \"He just wanted to honor the World War I veterans and the ones who died from the area,\" said Denis, who added that his dad spent a lot of time finding the names of the 112 soldiers and one nurse from the area who died. The memorial will be re-dedicated at 3:30 p.m. Wednesday, Sept. 25. [Ted Schurter/The State Journal-Register]

A memorial honoring Sangamon County residents killed in World War I has been moved from First Street and North Grand Avenue to a location west of the Illinois Vietnam Veterans Memorial at Springfield’s Oak Ridge Cemetery.

The reinstallment of the memorial also served as an unveiling of sorts, publicly acknowledging the formerly anonymous donor who paid for the World War I monument that was constructed and installed in the early 2000s.

John Kerasotes, 96, one of four brothers who helped grow his father’s local Kerasotes movie theater operation into a larger chain, is now publicly acknowledging he is the formerly anonymous donor who paid for the monument’s construction and installation.

“He also researched it. I mean, it was just his entire project. He tried to track down, get all the names right and spent a lot of time doing that, too,” said Denis Kerasotes, John Kerasotes’ son.

The names of more than 100 Sangamon County residents who lost their lives in the war appear on the memorial.

An inscription on the monument reads: “Dedicated to those who lost their lives while in the service of their country.”

A formal dedication of the relocated memorial took place on Wednesday, Sept. 25.

“He just saw it was something felt he wanted and needed to do, and they needed to be recognized and honored,” Denis Kerasotes said.