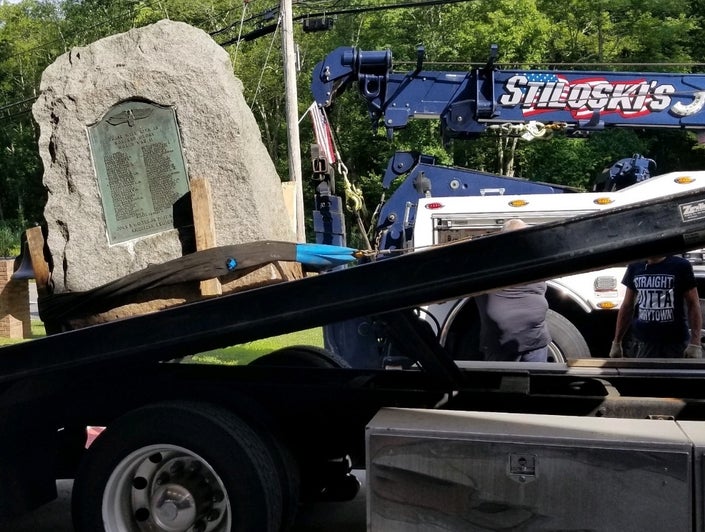 GOLDENS BRIDGE, NY — It has been a fixture in Goldens Bridge for decades. Now the American Legion monument that memorializes hamlet residents who served in both World Wars has a new home at the Golden's Bridge Fire Department.

The monument, a 4-ton granite stone affixed with a pair of bronze plaques emblazoned with the names of 76 Goldens Bridge residents, who served in the military and defended the nation during World Wars I and II, had been displayed outside the front entrance of the Community House on Old Bedford Road.

With the Community House now under private ownership because the Town of Lewisboro sold the building, Golden's Bridge Fire District and Department officials petitioned the town board for permission to relocate the monument to the grounds of the firehouse.

Town Supervisor Peter Parsons agreed with Fire Commissioner Joe Simoncini and Second Assistant Fire Chief Al Melillo, as well as John B. Winter Jr. Post No. 1734 American Legion representative Charles Green, when they appeared before a town board meeting over the summer to make the case for the monument's relocation to the Golden's Bridge Firehouse.

The monument is now prominently located in front of the firehouse on Route 138, just to the left of the main entrance across from the fire bell and, appropriately, beneath the American flag that flies over the building.

Read the entire article on the Patch newspaper web site.