Let’s continue with another look or two at Craven County’s World War I heroes. 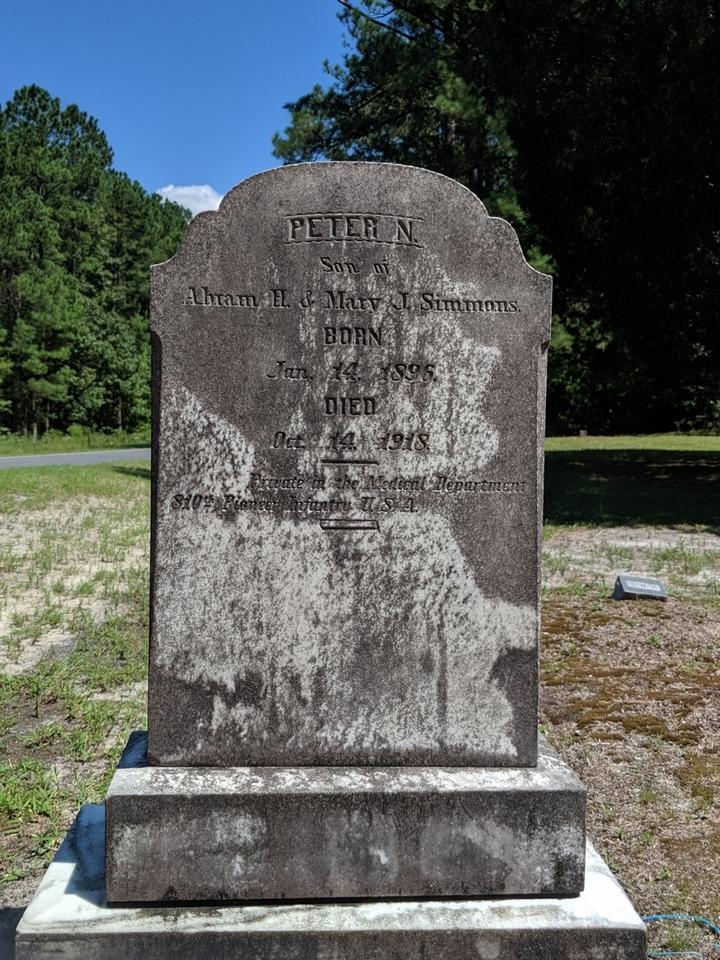 The grave site of Peter Nelson SimmonsThe New Bern Historical Society’s Claudia Houston deserves a lot of credit for a lot of this information. Cooperating with American Legion Post 539 in preparation for the 100th anniversary of the World War I-inspired veteran’s organization and the rededication of the county World War I memorial at the courthouse, she put in hours of research on these men, helping to dig up some 16 war casualties that the original marker missed. This, despite having to temporarily move to Florida while her Florence-devastated home is being restored.

Originally set up in the Jim Crow era, no African Americans were represented on the original monument (though one was later chiseled in). But seven were added this year, among them Peter Nelson Simmons.

Peter was born in Jones County around 1896 to Abraham and Mary Jane Simmons. The family moved to Township 7′s Pollocksville Road by 1910 where his father owned a farm and Peter – now 14 – no doubt worked. Over the next few years Peter also spent some time teaching school in Pamlico County.

Originally, America was happy to let Europe fight the Great War and enjoyed the profits of selling munitions and supplies to the allied powers. Germany, however, did not see all those ships supplying England as being neutral and, on January 31, 1917, declared it would sink any ships, British, American or otherwise, that it could find in the war zones. By March, five American ships were destroyed.

So, on April 6, America declared war, joined the fray, and sent millions of young men to war, of whom 116,516 never came home – unless they did so in boxes.

His boot camp was at Camp Greene in Charlotte where he was assigned to the 810 Pioneer Infantry as part of a medical detachment. He may have sung the popular “Over There” song with his fellow recruits, but he never made it “over there” himself. In fact, he never made it out of camp for, at the height of the influenza epidemic of 1918 on October 14.

Medicine was still in the process of becoming truly modern and up to – and through – the World War, America lost more men to sickness than to bayonets, rifles and bombs. In that war, 63,114 soldiers and sailors died of disease or other causes (including training) while 53,402 – about 10,000 less – died on the battlefield.

The influenza epidemic of that year, spreading Spanish flu around the world – was the worst in history. Historians estimate that it infected nearly a third of the planet’s population, killing 20 to 50 million of them. That didn’t match the overall death rate of 70 to 85 million civilians and soldiers world-wide, but it easily outdid our own casualties, taking out 675,000 Americans.

Peter’s body was returned home to Perrytown where he was buried in the Perrytown Community Cemetery.