By Patrick K. O’Donnell
via the Breitbart.com web site

The first week of October marked the 101st anniversary of the U.S. Marine Corps’ bloodiest day and one of its most important battles of WW I: Blanc Mont. Several Marines earned Medals of Honor on the blood-soaked ridge, including Corporal John Henry Pruitt. 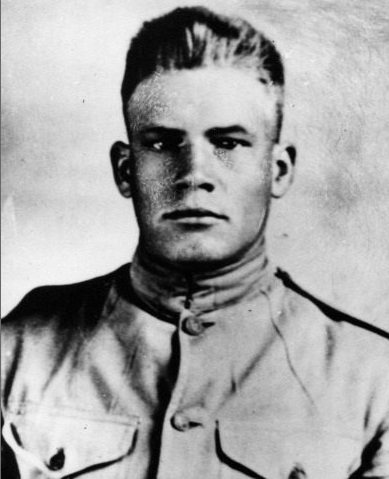 Corporal John Henry PruittPruitt served under Major General John A. Lejeune, the commander of the 2nd Division and 4th Marine Brigade. Several days before the battle, Lejeune stared at the large relief map sprawled out in front of him. His eyes focused on the ridgeline where the Germans had constructed an ostensibly impregnable fortress—Blanc Mont. Hundreds of machine-gun nests, an intricate maze of trenches, concrete blockhouses, artillery pieces, and tangled masses of barbed wire awaited any force foolish enough to attack. For years, the French Army had launched one forlorn assault after another on the fortress resulting in a bloodbath—thousands of men killed, gored attempting to scale the sloping limestone rock.

The tough commander, “a Marine’s Marine” later hailed as “one of the greatest of all leathernecks,” was one of only two Marine officers to hold a divisional Army command. The 2nd was one of the finest divisions in the Allied armies. Marshal Foch, noting the 2nd’s élan and battlefield prowess at Battles of Belleau Wood and Soissons, had requested the division be placed under the temporary command of the Fourth French Army, which was led by the grizzled, one-armed General Henri Gouraud.

Gouraud explained to Lejeune that the French Army had stalled in front of the high ground and his men were exhausted. He had earmarked the 2nd for the formidable task of breaking through the powerful German defenses. Gouraud’s piercing eyes and bushy handlebar mustache seemed almost to pop off his face as he emotionally placed his only hand on the German fortress atop Blanc Mont Ridge on the map.

“General,” he declared, “this position is the key of all the German defenses of this sector, including the whole Rheims Massif. If this ridge can be taken, the Germans will be obliged to retreat along the whole front thirty kilometers to the river Aisne. Do you think your division could effect its capture?” Without hesitation, Lejeune informed Gouraud that the 2nd could seize the stronghold.

The 2nd Division and John Pruitt were about to enter one of the most perilous kill zones on the Western Front. The various Army and Marine units within the 2nd Division would converge on Mont Blanc like two giant arrowheads. If they survived the onslaught, the men would link up on the crest.

Read the entire article on the Breitbart.com web site here: