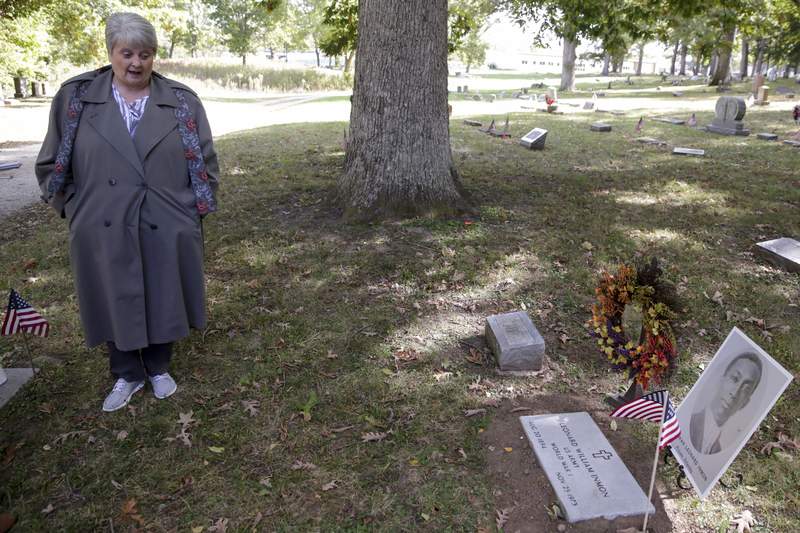 Diana Vice, with the Daughters of the American Revolution, speaks next to a newly placed headstone over Leonard Inman's grave Thursday in Lafayette. The World War I veteran was buried in an unmarked grave in 1973.

By the Associated Press, via the Indiana Journal-Gazette newspaper

LAFAYETTE – A black soldier who was buried in an unmarked Indiana grave is getting proper recognition for his military service in World War I nearly a half-century after his death.

The memorial for Leonard Inman, who died in 1973, Saturday at Spring Vale Cemetery in Lafayette and featured a 21-gun salute, the retiring of colors and taps by the American Legion Post 492, the Journal and Courier reported.

Inman, whose name is spelled “Inmon” in the 1919 Tippecanoe County World War I Honor Roll book, served during the war in the 809th Pioneer Infantry, Company C.

The General de Lafayette Chapter of the Daughters of the American Revolution has installed a headstone for Inman, which the cemetery paid for in commemoration.

Born in 1893 in Knoxville, Tennessee, Inman moved with his family to Lafayette in 1908. He enlisted into service 10 years later. As an African American, he was not permitted to engage in direct combat.

Since the American military was not desegregated until 1948, Inman likely served under French command, according to the chapter's research. Following the war, he returned to Lafayette and worked for the Murdock family, one of the well-known families living in the area at the time. In 1943, he started working for Alcoa to assist with the war effort in producing aluminum, staying there until 1958. He had no children and died Nov. 25, 1973, in his home after suffering an apparent heart attack.

Diana Vice, the chapter's vice regent, said she discovered that Inman had no headstone after purchasing the honor roll book that only includes a small section, in the very back, delegated to the county's 18 black soldiers. She contacted the county's Veterans Services office, which paid for the stone.

“We just can't let his memory be forgotten,” Vice said. “I just think that we need to honor them. (African American soldiers are) relegated to the back of this history book in 1919. I felt like he deserved one, and his memory needs to be kept alive and honored for his service and sacrifice.”