Eugene Bullard isn’t a household name, but his inspiring story of bravery, valor, and perseverance is surely worth telling.

A bronze statue honoring the Columbus, Georgia, native was finally unveiled on Wednesday before a cheering crowd of descendants, U.S. service members, French officials and other guests, The Atlanta Journal Constitution reported. 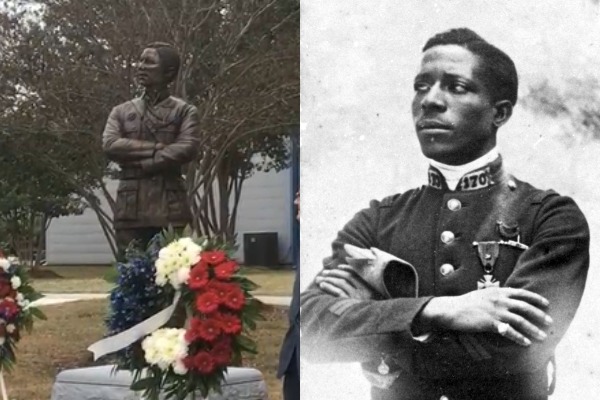 Eugene Bullard fled the Jim Crow South as a child, joined a band a gypsies and then stowed away on a German ship to Europe. (Photos: WMAZ 13 / video screen shot and Wiki Commons)Bullard, the child of a former slave who fled the Jim Crow South after witnessing the near lynching of his father, would go on to fight for the French Foreign Legion in World War I. He managed to have a little fun along the way, boxing professionally and drumming for a jazz band in Paris. He even rubbed elbows with the likes of trumpeter Louis Armstrong.

His journey as a stowaway across the pond to Europe was just the start of his incredible legacy. A war hero, Bullard received France’s Croix de Guerre for his valor at the Battle of Verdun and later joined its national air service in 1916 to become the first Black fighter pilot.

Now the state that he fled more than 100 years ago is honoring him on his birthday with a gleaming bronze statue.

“I’m just so glad to live to see his state — the state that he ran from — recognize his greatness, and call its native son home,” said Ms. Harriett Bullard, one of Bullard’s descendants.

Harriet Was among the 20 descendants who attended the unveiling ceremony Wednesday at the Museum of Aviation in Robins Air Force Base near Warner Robins, Georgia, per the AJC. Officials with Georgia’s WWI Centennial Commission pulled away a blue cloth to reveal the 6-foot-3-inch bronze memorial honoring the man fittingly dubbed “The Black Swallow of Death.”

According to  BlackPast.org, “Bullard quickly became known for flying into dangerous situations often with a pet monkey. He amassed a distinguished record, flying twenty combat missions [and] downing at least one German plane.”

“For him to be standing out there — now we’re finally getting to the point that we have honored him in a proper way.”