Gremlin Theatre puts us in the WWI foxhole with decision makers

It can’t be easy for a small company to tackle a big, big play, but Gremlin Theatre has assembled a knockout cast, top to bottom, for its “Journey’s End.” 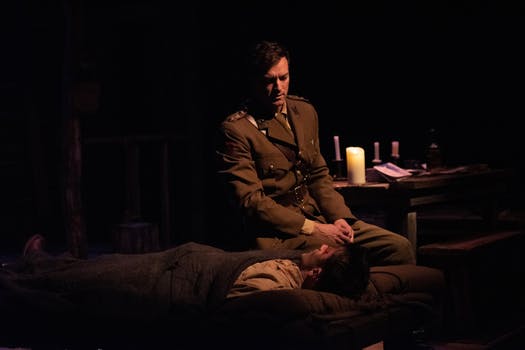 Benjamin Slye (on cot) and Peter Christian Hansen in Gremlin Theatre’s “Journey’s End.”The 12 (all white, all male) performers are as cohesive a unit as you’ll find in town, which is an immeasurable asset in a play as cloistered as “Journey’s End.” It takes place on one set — director/scene designer Bain Boehlke’s incredibly detailed foxhole, all wooden beams and sandbags — over the course of four days near the end of World War I.

Leavened by a surprising amount of humor, the drama is about the price paid by the people who fight a war and about how oddly similar life in a foxhole is to life outside it. Class distinctions still rule in “Journey’s End” and, although that underground bunker is hardly “Downton Abbey,” the officers still have servants to bring them tea with jam and bread.

Playwright R.C. Sherriff’s central character is a great one, played in the original 1928 production by a young Laurence Olivier. Capt. Stanhope (Gremlin’s artistic director, Peter Christian Hansen) seems to be suffering the effects of shell shock, sleep deprivation and what we’d now call post-traumatic stress disorder. Jovial one minute and hurling insults the next, he’s barely keeping it together enough to lead his men. That they heed him so dutifully is a tribute to Sherriff’s incisive and still modern-sounding writing, as well as a clue to the solid military man he once must have been. It’s a beast of a role, but Hansen makes all the pieces fit, his charm and wit offering hints of the man Stanhope was before war changed him.

Boehlke’s production pulls you into its spell in a number of ways: deep darkness, suggesting a place that is lit only by candles; the lulling sound of gunfire in the distance (courtesy of sound designer C. Andrew Mayer); a recurring musical motif from Samuel Barber’s mournful “Adagio for Strings”; the actors’ use of the space, which becomes more constrained as the play goes on; the forced lightness of the characters, which makes their duties seem even more devastating. It all creates a powerful effect that peaks with a wonderfully human exchange between Benjamin Slye and Alan Sorenson as men who are about to lead others into battle, wavering between discussing strategy and talking about absolutely anything else they can think of. That scene, which could take place in any war, is a sad reminder that this nearly century-old drama will always be relevant.

Read the entire article on the Star Tribune web site.