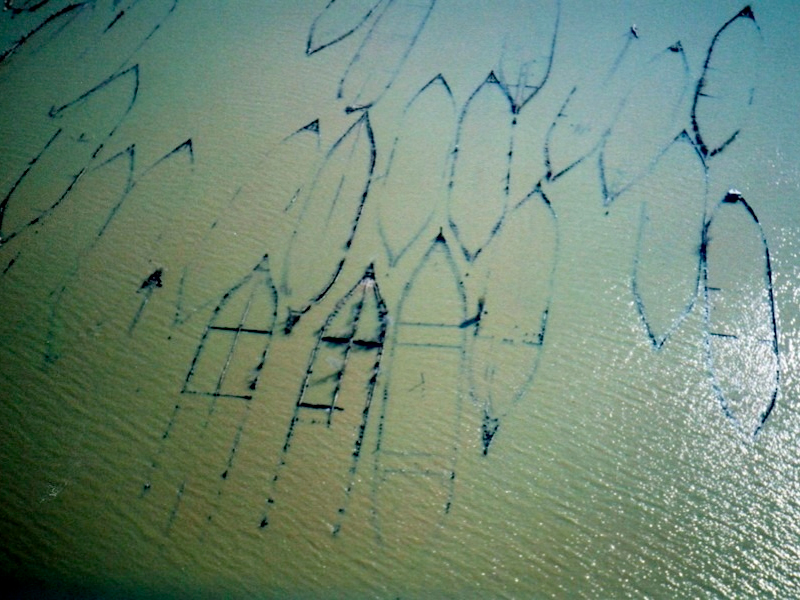 An overview of Mallows Bay shows just a portion of the nearly 200 shipwreck hulls there. Photo courtesy Donald Grady Shomette

The Ghost Fleet: How Skeletons Of WWI Ships Came To Rest In The Potomac

If you look at a satellite image of the Potomac River, about 30 miles south of Washington you’ll see a curve in the river, packed with dozens of identical oblong shapes. At low tide, they emerge eerily from the water — a “ghost fleet” of wooden steamships dating back to World War I. It’s called Mallows Bay, and it’s one of the largest collections of shipwrecks in the world.

The story of how these ships ended up in the Potomac is a tale of environmental destruction — and rebirth. The shipwrecks have recently received federal protection, as part of a new national marine sanctuary.

‘It Just Loomed Out Of The Fog’

Donald Shomette first saw the ghost ships when he was a kid, on a camping trip. He shows me a photo from around that time.

In the morning, the river was socked in with fog as the boys and their dad puttered through the water in a small motor boat. Suddenly, rising from the Potomac, we see the wooden bow of a ship.

“It just loomed out of the fog,” recalls Shomette. “It was amazing.”

Altogether, there are about 200 shipwrecks crammed into Mallows Bay. For Shomette, the sight was instantly entrancing.