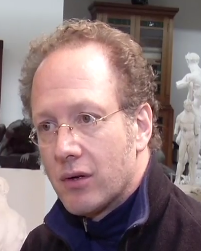 Sabin HowardHoward will present his magnificent classical design for the National World War I Memorial, which recently received final approval from the required government authorities. The Memorial is to be located in Pershing Park in Washington.

Howard's design is a monumental 58-foot-long bronze sculpture titled "A Soldier's Journey." Flowing from left-to-right, the 38-figure composition allegorically tells the story of a soldier who leaves his family for the front, endures the ordeal of battle, and returns home.

The ideals of heroism, family, and caring are juxtaposed with the violence, terror, and aggression of battle. The sculpture simultaneously tells a second story--namely, America's coming of age during the Great War.

Howard's talk will be followed by a reception. Tickets are available via the eventbrite web site.

Founded in 2002, the National Civic Art Society (www.civicart.org) is a 501(c)(3) non-profit that educates and empowers civic leaders in the promotion of public art and architecture worthy of our great Republic. The society advances the classical tradition in architecture, urbanism, and their allied arts. Through its programs and initiatives, the society guides government agencies and officials; assists practitioners; and educate students and the general public in the preservation and creation of beautiful, dignified public buildings, monuments, and spaces.

More information on the new National World War I Memorial in Washington, DC is available here.