A Memoir of the War: A Doughboy's Journey Through France and Germany in World War I 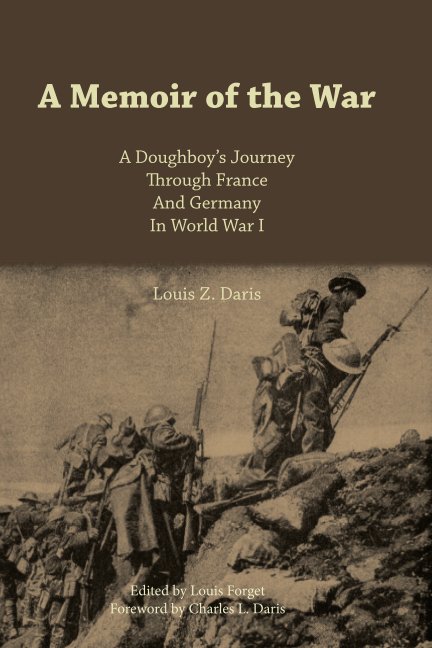 The young man from a small New England town, Ashburnham MA, arrived wide-eyed in Old Europe and absorbed it all with fascination and curiosity. He wrote of the cobblestone streets, the charming chapels, the seemingly endless quantities of wine, the pretty French girls. He continued to marvel when, after the Armistice, he was part of the American Army of Occupation in the enchantingly picturesque Rhine valley in Germany.

He told me that one of his sisters had typed the narrative for him on the onion-skin parchment that I kept in a box for a very long time. In addition to the narrative, he created a set of four photo books that included photos and postcards annotated in stunning relief in white ink on black construction paper, written in his impeccable penmanship.

The collection – the narrative and the photo books - have been recreated and are presented herewith in more readable format in two volumes.

My father was one of ten children, the offspring of humble French-Canadian immigrants who spoke virtually no English. Their house was lively and bustling with activity, accompanied always by great hilarity. I recall having my first taste of cold beer in that house when my mustachioed grandfather mischievously let me have a sip. Dad’s sense of humor was nurtured in that house, and it resurfaced time and time again in his descriptions of his war experiences.

Dad’s brother Ted was one of ten from the village who signed up for the Army as a group after America declared war on Germany. They were all full of raw patriotism and pride in America. The brothers and most of the group were together during the fighting, participating in the first American effort at St. Mihiel. Subsequently Dad, who had been promoted to Sergeant, saw serious combat in the bloody Meuse-Argonne fighting that preceded the Armistice.

In between these times he managed to enjoy a memorable night out in “Gay Paree,” had his appendix removed at an Army field hospital on the Longchamp racetrack in Paris, was wounded twice, and was knocked unconscious by a bomb from a German warplane he had taken a potshot at with his Springfield rifle. I have a fragment from that rifle, which was shattered by the bomb.

Suddenly, the Armistice is signed. The fighting ends. My father’s unit is sent to Germany as part of the American Army of Occupation. The beautiful river valleys, the charming villages, the castles, the opulent spas all fascinated him. He collected photos and postcards by the dozens. But the charm did not erase his anger over the injustice of a Germany left intact while its army destroyed so much of France.

In his memoir Louis Zepherin Daris comes across as an honest, humble, devoted, and courageous young man who lived in an America notably more innocent than what it has become. He experienced fear from U-boats during his Atlantic crossing, and bravely led a patrol on a reconnaissance mission behind enemy lines. Throughout, he did his job well, was promoted twice, and unlike so many of our soldiers, he was fortunate enough to live to return home and write about his experience. In this Centennial Year, his Memoir is a gift to remind us of the ordeal the soldiers endured for America and the world. What better occasion could be there to salute my father’s bravery, and that of over two million other young Americans, who participated in that ghastly conflict.

POSTSCRIPT: This March while I was in France I followed the movements my father describes. It was awe-inspiring to view the distances these soldiers marched, usually through mud with full backpacks, and often at night to hide their movements as they approached the lines. Much of the countryside has reverted to agriculture, but the devastation is still evident if one looks closely. And cemeteries are everywhere. Not surprisingly, it is a region where one can still encounter good feelings toward America.

PDF versions of the two volumes can be viewed at:
https://drive.google.com/file/d/1Yf_jaeZwr4jSHj4Z9MDJDhm_yEp7dIER/view?ts=5aa499c9

The books, from which I seek no profit, also are available for purchase on he Blurb.com bookstore: