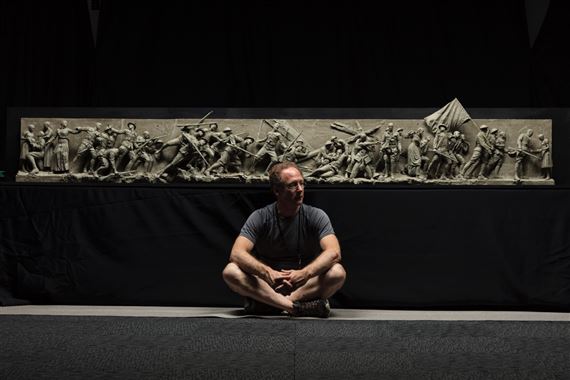 By Michael Pearce
via the MutualArt web site

When American soldiers entered the Great War that had torn Europe apart since 1914, their involvement ended the horror that bloodily consumed a generation of young men. By early 1918, over two million Americans had crossed the Atlantic to fight, and over one million of them saw combat. Their participation was decisive. In Spring of 1918 the Kaiser’s forces had fought their way forward to within fifty miles of Paris, but heroic American assaults on the German lines turned them back, certainly saving Europe from German rule. It took less than a year for the Germans to surrender after the first American boots landed in the mud of the front lines. Nearly fifty thousand American soldiers gave their lives in battle, and a quarter of a million were wounded, some terribly.

Under the clear, cold light of four broad skylights cutting through the dark, wood-beamed ceiling of his austere New Jersey industrial warehouse studio, the brilliant American sculptor, Sabin Howard, is twelve weeks into his work on the final modelling stage of A Soldier’s Journey, which will soon become the United States’ National World War One Memorial. The 60 foot long figurative bronze was approved for installation in Pershing Park, next door to the White House in Washington, D.C. by the US Commission of Fine Arts last May. Until now, Washington has had no official monument to the sacrifice of the American armed forces in the Great War.

Howard’s sculpture cleverly tells the dramatic story of a soldier’s journey to war and his return home, arranged cinematically in a sequence of scenes, which seamlessly blend together. Reading the narrative of the sculpture is an extraordinarily emotional experience. First, we see the soldier’s daughter handing him his helmet, and his departure from his wife is a scene of outstretched arms and high emotion; he is encouraged to stride forward into the ranks by an officer, then charges pell-mell into battle, which is cleverly sculpted as a moment of violent intensity where some of his comrades fall, either dead or injured. Shell-shock is perfectly captured in the form of the soldier facing directly out toward us, interrupting the flow of action from left to right, and forcing viewers to consider not only the horrible death experienced by many of the soldier’s comrades, but also his own experience of surviving that horror.