American Legion Post 29 in Greenwood, Mississippi bears the name of three World War I veterans who all sacrificed their lives during the Great War. 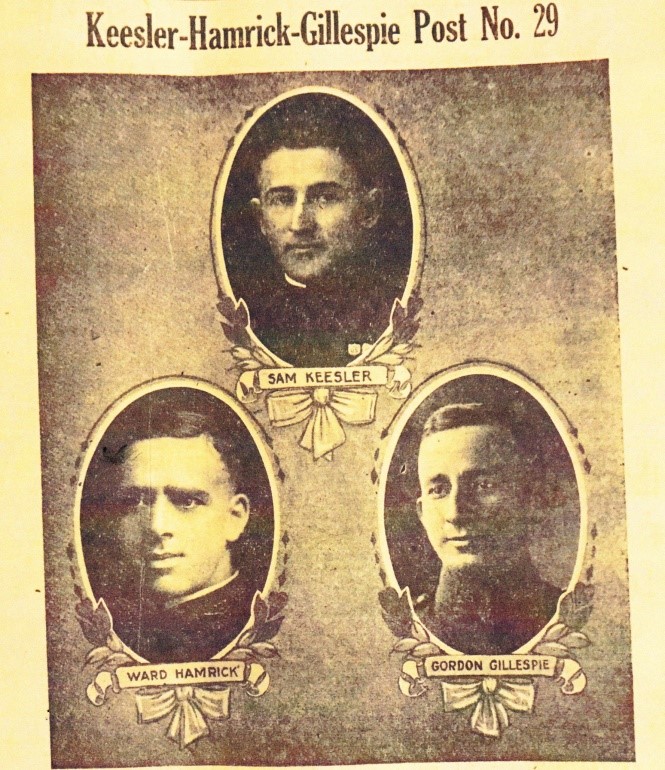 Lt. Samuel R. Keesler, Jr. was born on April 11, 1896 in Greenwood and attended Davidson College. He joined the United States’ burgeoning U.S. Army Air Service, commanding the 24th Aero Squadron in the Verdun sector of the Western Front. Air combat emerged during World War I as a vital piece of modern warfare. Aerial reconnaissance was crucial for increasing the accuracy of artillery bombardment and determining the depth and layout of enemy trenches.

Keesler was performing reconnaissance over German territory on October 8, 1918 when his plane came under attack by squadron of German Fokkers. Keesler was wounded six times and his plane forced down, but he took a German plane down with him. He died the next day in a German hospital and was eventually buried at Saint Mihiel American Cemetery and Memorial in France. Keesler’s legacy lives on. In addition to winning the World War I Victory Medal with Silver Star, the Keesler Air Force Base in Biloxi, Mississippi was named after him in 1941.

Cpt. Henry W. Hamrick (326th Inf. AEF) and Lt. Gordon Gillespie perished within days of one another during the Meuse-Argonne Offensive in mid-October 1918. Their deaths highlight the tragedy of so many American servicemen in the war’s final months, so close to escaping the war with their lives. The Meuse-Argonne Offensive was the largest and greatest American operation of the war and punctuated the Allies’ inevitable victory on the Western Front.

Captain Hamrick died on October 15, 1918 after being struck by shrapnel from an artillery shell. Hamrick’s unit had just been relieved from the front lines and was on its way to the rear when the artillery shell struck near Hamrick.

A few days later, a German bullet killed Cpt. Gillespie on October 18, 1918 while he was commanding a machine gun company.

In the final months of the war, both sides were becoming more and more aware of the war’s coming end. This sense of the war’s approaching conclusion bred a sense of desperation in some American servicemen. They watched in horror as their comrades were cut down in the final months, days, and hours of the war. In one of his final letters home, Gillespie observed that, “the end is near, because the innumerable prisoners are in unison in declaring that they realize their defeat and all are hoping that the Kaiser will quickly awaken from his insanity and make peace possible.”

Thanks to the support of Greenwood’s American Legion Post 29 and the painstaking research conducted by its commander, John H. Favara, the stories of these three heroes will live on in perpetuity.