One day this past July while driving along Main Street in Coatesville, PA, banners lining the sidewalks piqued my innate curiosity about history. Veterans of Foreign Wars (VFW) Post 287 issued these banners in honor of Coatesville area men and women who served their country past and present.

One banner in particular grabbed my attention because as far as I could determine it displayed the only local veteran who had served in the First World War. The banner read “Wellington G. Sahler, Killed in Action, 1918, Died in the Battle of Argonne Forrest.” 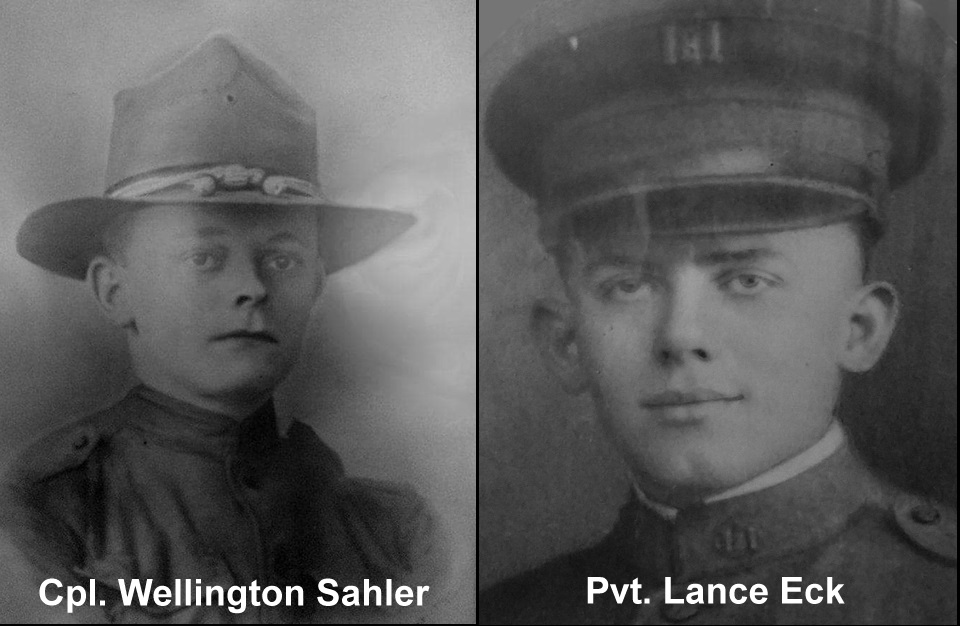 I always thought that World War I was overlooked in school and wanted to learn more about him. I contacted VFW Post 287 (which I had learned started the banner project in our town) on Facebook, and was surprised to discover that Sahler was their namesake. The post is named Sahler-Sedan VFW Post 287.

After discussing online with the Post Chaplain Claresa Whitfield about my interest in Sahler, she informed me that little was known about his history. She asked me to do research and invited me to the 100th anniversary celebration of the Post on December 7, 2019 to make a formal presentation of my work. Post 287 was chartered on December 4, 1919.

Sadly, I would come to learn that Sahler endured heartache and tragedy long before the atrocities of war claimed his life.

Wellington was born in March 1896 to Isaac Wayne and Rachel Sahler of Coatesville. In 1899, he was only three years old when his father succumbed to rheumatism. Following his father’s death, his mother secured employment as a clerk at W.W. Mast Department Store, present day Coatesville Cultural Society. While employed at Mast, Wellington was under the care of Rachel’s closest friend Rebecca Grey of Thorndale.

After two years of steady employment, some sense of normalcy seemed to have been finally been restored. Then suddenly, one day in June 1902, Rachel’s life was tragically cut short when she was murdered for refusing to accept a marriage proposal. After remaining under the care of Rebecca Grey for a short time after Rachel’s death, Wellington, now an orphan, was sent to Girard College in Philadelphia. In March 1914, he was discharged from Girard under their “18 year rule.” 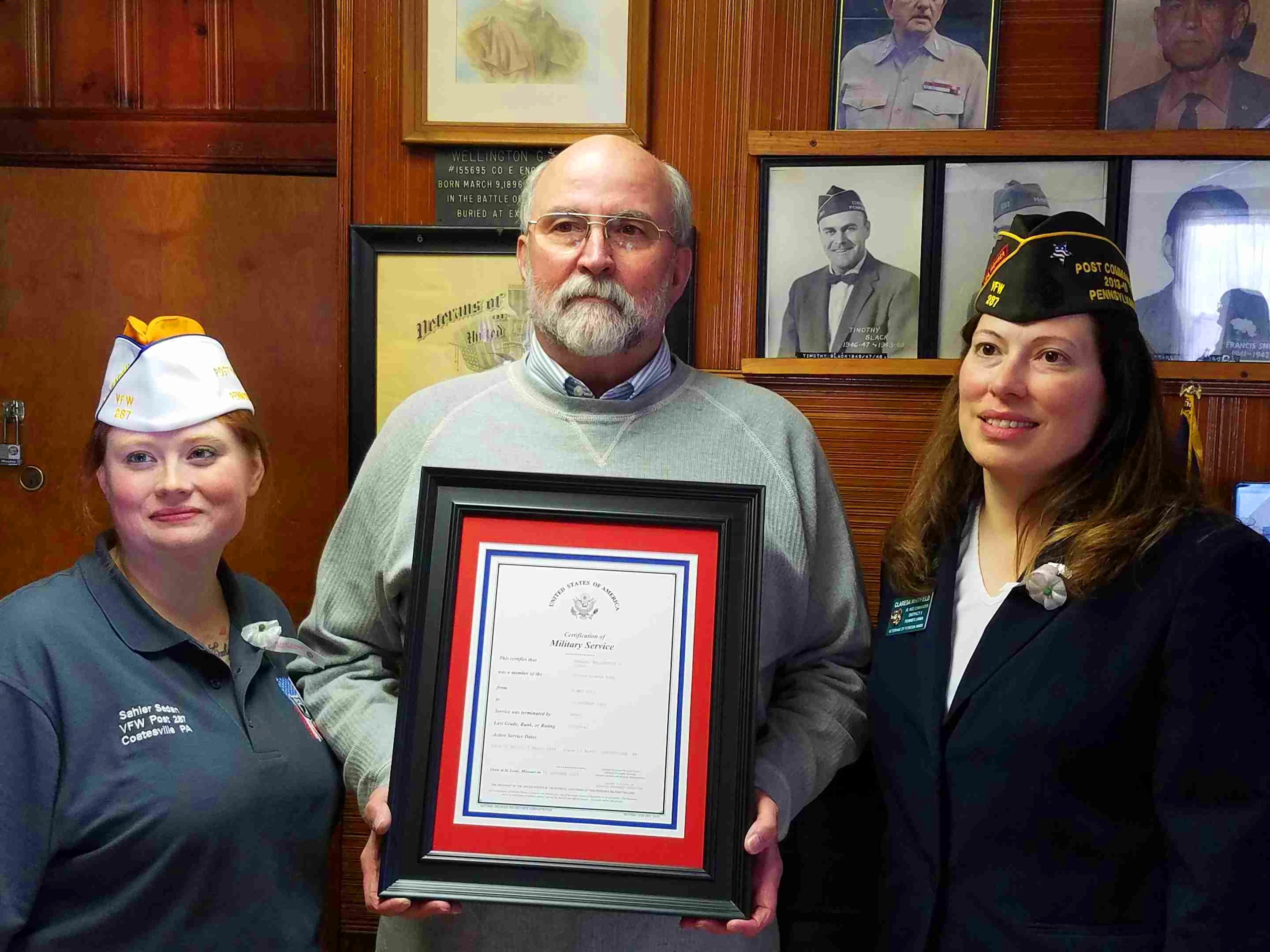 In April 1917, America entered World War I. War fever spread quickly throughout the country. Sahler and Eck decided to enlist into the U.S. Army at Ft. Slocum, NY. Both were assigned to 1st Engineers, 1st Division as Privates. Eck and Sahler became members of Companies D and E, respectively. The 1st Engineers trained at Washington Barracks, D.C. from May to August. In August they disembarked from Hoboken, NJ and sailed to France aboard the Finland.

While in France, Eck and Sahler’s companies served in the same defensive sectors and campaigns. Their companies fought in the Battles of Montdidier-Noyon, Aisne-Marne, St. Mihiel and Meuse-Argonne. During his service, Sahler was promoted to Corporal. The Battle of Meuse-Argonne would become the final battleground for both men.

On October 6, 1918, Eck was severely injured with shrapnel penetrating both legs and suffering from mustard gas exposure.

On October 10, four days later, Sahler was killed in action. On his person at the time of his death was a ladies gold Elgin pocket watch which was among his late mother’s personal effects at the time of her death. Cpl. Sahler is buried in Meuse-Argonne American Cemetery in France. 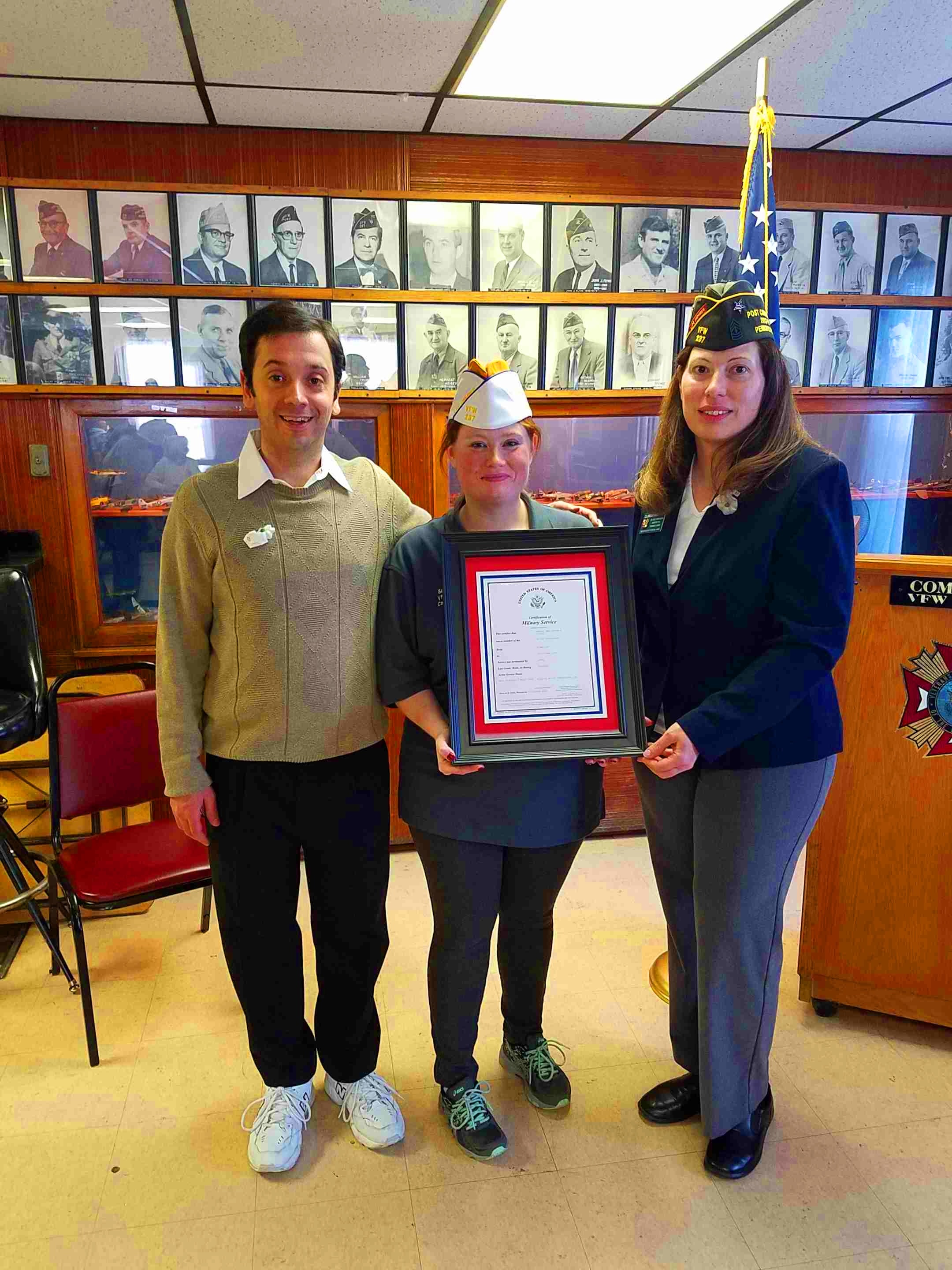 Left to right: Joseph Felice, Professional Historian; Tiffany Robinson, VFW Post 287 Commander; and Claresa Whitfield, VFW Post 287 Chaplain. The Post Commander is holding a framed copy of Sahler's Military Service Certificate issued from the National Archives.Upon his return home, Eck was hospitalized until April 1919. It became evident he would never regain his full health. Later that year, in November, Eck worked with the VFW Post in Reading to charter the Sahler-Sedan Post in Coatesville to commemorate his fallen friend. Sedan was the Eastern most point that American forces had reached before the Armistice was signed. On December 4, 1919, Eck’s efforts paid off when Sahler-Sedan VFW Post 287 was chartered.

Without Eck’s heartfelt efforts to preserve his friend’s memory VFW Post 287 would have never existed. Eck, despite being plagued with suffering from his injuries, also succeeded in preserving his own legacy. Along with his wife Marion Lengel the two had three children, Robert, Dorothy and Marian. Eck died from complications related to phosgene gas poisoning in September 1934 at the age of 35. He was laid to rest at Charles Evans Cemetery in Reading.

This past Pearl Harbor Day, VFW Post 287 celebrated its 100th anniversary. I was privileged to present on the life of Cpl. Sahler. I was happy to present to Post Commander Tiffany Robinson, Cpl. Sahler’s Certificate of Military Service issued by the National Archives in St. Louis, MO.

Also, I offered to the Post Commander a framed copy of an article published in the Coatesville Record in November 1919. This article chronicled the friendship between Eck and Sahler and the beginning of the Sahler-Sedan VFW Post.

The Post Commander and Chaplain were overwhelmed with joy to receive formal recognition of Sahler’s service while also learning about the origins of their Post. Corson Stephens, 1st cousin twice removed from Cpl. Sahler, who I met through my research, was also in attendance.

Sahler and Eck endured tragic circumstances. The only further remaining tragedy for these veterans is the legacy of their honor and sacrifice is quickly fading, making them nearly forgotten heroes. Given the times in which we live, I cannot think of a better moment to restore their legacy. Their lives serve as valuable reminders of how we cannot allow adversity to deter us from being of service to our families, friends and community. Now it is up to us to preserve both of their legacies. In the words of Gen. Douglas MacArthur “old soldiers never die, they just fade away.” 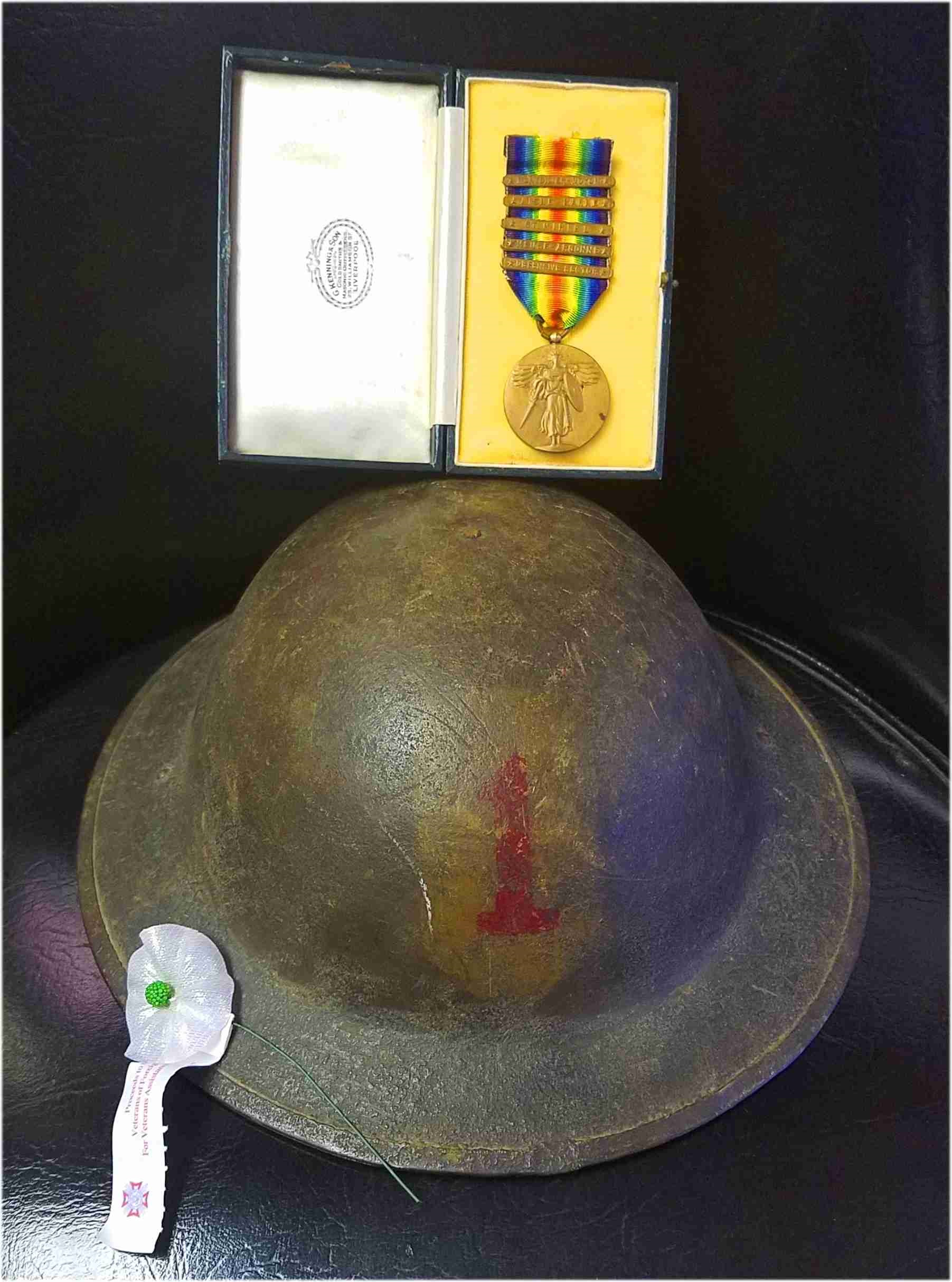 Corporal Sahler Presentation (Top to Bottom): World War I Victory Medal with Five Battle Clasps for the campaigns Cpl. Sahler and Pvt. Eck both served in; World War I Helmet from the "Big Red One" First Division; and a VFW Poppy Pin.