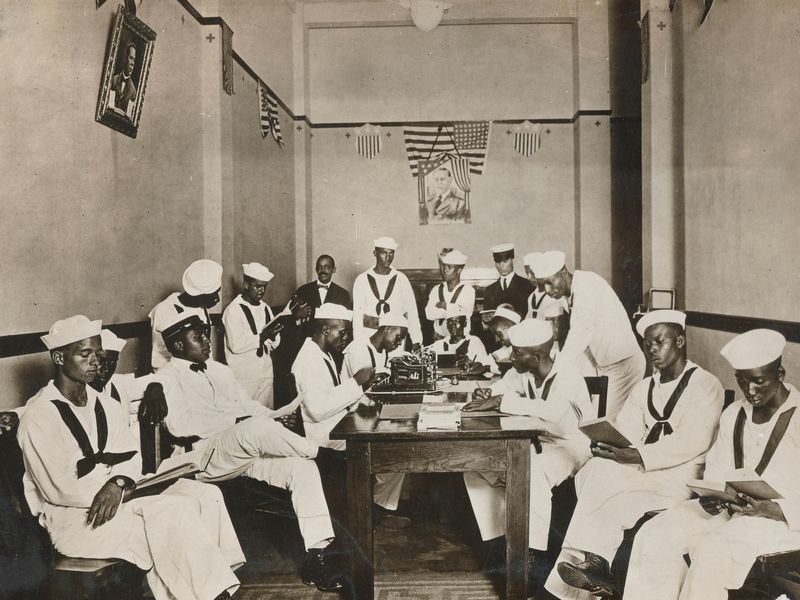 Sailors reading, writing and relaxing at the Red Cross Rest Room in New Orleans. Around 400,000 African Americans served in World War I.

World War I Planted the Seeds of the Civil Rights Movement

By Anna Diamond
via the smithsonianmag.com web site

n early April 1917, when President Woodrow Wilson addressed a joint session of Congress seeking to enter the United States in the first World War, he urged the “world must be made safe for democracy.” A. Philip Randolph, the co-founder of the African-American magazine The Messenger, would later retort in its pages, “We would rather make Georgia safe for the Negro.”

The debate over democracy, and who it served in the U.S., was central to the black experience during the Great War. African Americans were expected to go abroad to fight, even though they were denied access to democracy, treated as second-class citizens and subjected to constant aggression and violence at home.

Randolph was at odds with other leaders like W.E.B. Du Bois, who saw the war as an opportunity for African Americans to demonstrate their patriotism and who expected they’d be better treated after their return home. Writing in the NAACP’s magazine The Crisis, Du Bois called on African Americans to “forget our special grievances and close our ranks shoulder to shoulder with our own white fellow citizens and the allied nations that are fighting for democracy.”

This tension frames the National Museum of African American History and Culture’s new exhibition, “We Return Fighting: World War I and the Shaping of Modern Black Identity.” Focusing on both soldiers and civilians, the expansive show explores the experiences and sacrifices of African Americans during the war, and how their struggles for civil rights intensified in its aftermath. “World War I was a transformative event for the world,” says guest curator Krewasky Salter, who organized the show, “but it was also a transformative experience for African Americans.”