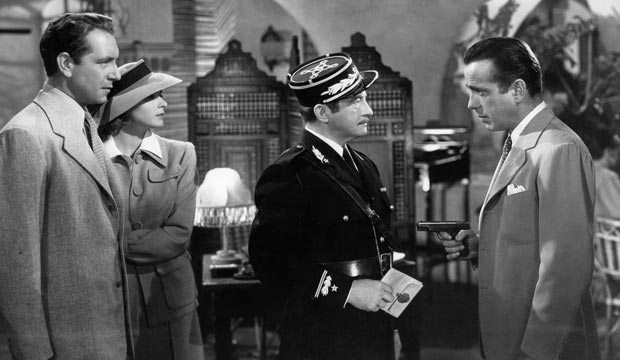 Before becoming a movie star in films like Casablanca Humphrey Bogart (right) served as a sailor in the United States Navy in World War I.

By Susan King
via the Gold Derby web site

Sam Mendes’ acclaimed World War I epic “1917” graphically shows how the Great War was indeed hell. And numerous actors and filmmakers were there on the front lines or bravely engaging in dogfights in the sky over France. Just as Mendes’ illustrates in “1917,” the combat took its toll on these soldiers who went on to fame in feature films. Numerous were wounded, gassed and even were POWs. Needless to say, the majority were never the same.

Here’s a look at 10 actors, who became stars during the Golden Age of Hollywood, who participated in World War I

Long before he uttered “Here’s looking at you kid” in 1942’s “Casablanca,” the Oscar-winning superstar was a teenager when he enlisted in the Navy in May of 1918 where he was assigned to the ship the Leviathan. And it was during this time, he suffered the injury that created the scar on the right corner of his upper lip. Though Hollywood lore has stated that he was hit by shrapnel, the official Bogart website bio maintains it was probably due to a Navy prisoner he was escorting. The man asked Bogey for a cigarette and when he reached for a match, the prisoner smacked Bogart across the mouth with his handcuffs and took off. Despite the fact that Bogart was bleeding from a severely torn lip, he ran after and tracked down the escapee.

The suave British actor came to fame in the silent era and had a long and successful career during the sound era winning an Oscar for 1947’s “A Double Life” and starring in such classics as 1935’s “The Tale of Two Cities,” 1937’s “The Prisoner of Zenda,” 1939’s “The Light that Failed” and 1942’s “Random Harvest.” Colman enlisted as a private in 1914 with the 14th Battalion London Regiment. During the Battle of Messines in Belgium, Colman was blown into the air by a shell and suffered such bad damage to his knee and ankle, he had a permanent limp. He managed to hide his limp in his film roles even tackling major action roles in several films.