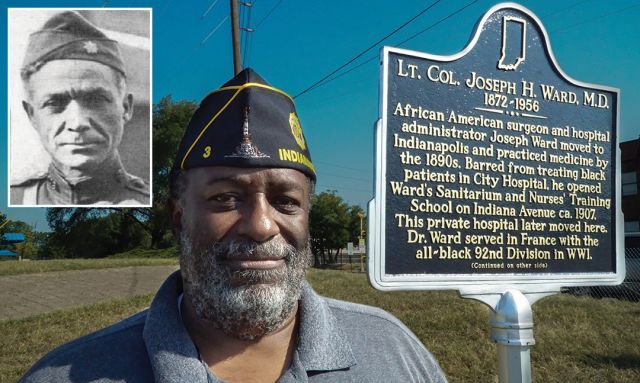 By Leon E. Bates
via the American Legion web site

Genealogists say the most important thing on a headstone is the dash between the date of birth and date of death, for that dash represents the life lived.

At the top of a gentle rise in Indianapolis’ 550-acre Crown Hill Cemetery is the final resting place of Lt. Col. Joseph H. Ward (1872-1956), an African American surgeon, hospital administrator and World War I veteran. Like most military markers, Ward’s offers few clues to his dash – his many accomplishments, in and out of uniform.

I first came across Ward’s name while doing research before returning to college, and came to appreciate his legacy while doing additional dissertation research. I learned that Ward established and operated a hospital for black patients when they were barred from treatment elsewhere. Digging further, I discovered he was a medical trailblazer and early American Legion member whose achievements – decades before the civil-rights movement – have been largely forgotten.

EARLY YEARS Ward was a first-generation freedman, born near Wilson, N.C., on the same plantation where his mother, Mittie, grew up enslaved. His maternal grandfather, David G. Ward, a physician, owned the plantation. However, his grandfather took no interest in young Joseph or his education.

Read the entire article on the American Legion web site.