In the weeks following Iran's Jan. 8 ballistic missile attack on the Ain al-Assad air base in Iraq, 110 American service members deployed there were diagnosed with what has been the signature, albeit invisible, wound of the wars in Iraq and Afghanistan: traumatic brain injury caused by concussive blasts from exploding weapons. 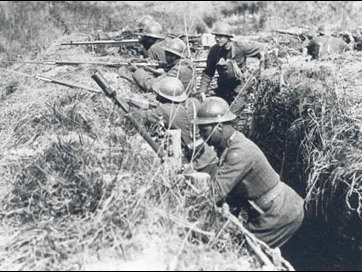 Soldiers of the 369th Infantry during World War I wear French "Adrian" helmets and use French-issued rifles and equipment. Even if all of those service members were wearing combat helmets, they and more than 400,000 other U.S. troops diagnosed with TBI over the past two decades lacked equipment that was specifically designed to protect their brains from the blast of shock waves.

That's because ever since the first modern combat helmet came out in 1915, these so-called "brain buckets" have been designed to protect heads not from invisible shock waves, but from shrapnel, bullets and other blunt physical objects.

In fact, a recent study done by a team of Duke University researchers finds that the 105-year-old "Adrian" helmet used by the French army in World War I can provide better blast protection than the Advanced Combat Helmet (ACH) widely used by the U.S. military.

"That was very surprising, actually," says Joost Op 't Eynde, the Belgian bioengineering doctoral candidate at Duke who led the research project comparing three WWI-vintage helmets with the ACH model. "It was only after the tests that we saw that the modern helmet was not better. And then we saw that, in certain scenarios, the French Adrian helmet had performed better."

Read the entire article on the WAMU web site.