Innovative, team-taught class brings scale of World War I into focus through trip to European battlefields

By Brian Wallheimer
via the University of Notre Dame web site

More than 20 million people were killed and another 20 million or more were injured in World War I, but it’s difficult for Americans today to wrap their minds around just how catastrophic the conflict was. The last survivors have died, the war wasn’t fought on American soil, and it ended more than a century ago. 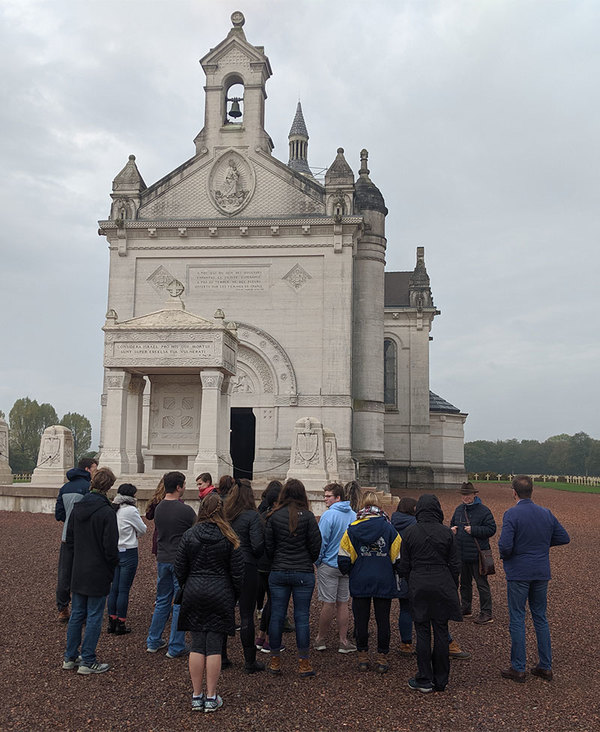 In visiting sites across Europe, the Notre Dame University class combined conventional battlefield analysis with the collective and individual things people did to understand and come to terms with the war.But a group of Notre Dame students now has more than numbers, texts, or photos to help them understand the devastation.

As part of their Great War and Modern Memory class — an interdisciplinary course designed and team-taught by Robert Norton, a professor of German, and John Deak, an associate professor of history — they traveled to Europe to visit battlefields and World War I memorials along the western front.

The trip was fully funded through an Arts and Letters Teaching Beyond the Classroom grant and support from the Nanovic Institute for European Studies.

“It was an extraordinary opportunity that I hope we can replicate,” Norton said. “I’ve had colleagues at other institutions say, ‘I wish we could do that, but it would be impossible for us.’”

The goal for the class was to combine conventional battlefield analysis with the collective and individual things people did to understand and come to terms with the war, Norton said.

“We wanted the students to physically experience the sites where so many of the important events of the First World War took place because we believe that gives the students an otherwise not possible insight into the nature of the war and how it’s described in literary and scholarly accounts,” he said.

Read the entire article on the University of Notre Dame web site here: