By Kelly Kazek
via the AL.com (Alabama) web site

Homer Givens was 19 years old when he received the title of “America’s first World War I hero,” as well as one of France’s highest honors, the Croix de Guerre. Givens, born in Florence, Ala., also received a Purple Heart and is now honored on the Walk of Honor at Florence’s River Heritage Park.

Givens enlisted in the military just after graduating from Coffee High School in 1916, not long before the U.S. entered the war. According to the Florence-Lauderdale Public Digital Archive: “Homer enlisted in the US Army, sailing for France in June of 1917 as part of the First Infantry Division, ‘the Big Red One,’ led by Gen. John J. Pershing.” 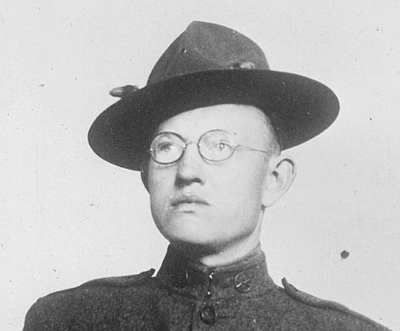 Homer Givens of Florence, Ala., was called America’s first World War I hero. (Photo from Library of Congress)The unassuming, bespectacled young man made an unlikely hero but his actions during a bloody battle with German forces left no doubt about his bravery. On Nov. 1, 1917, Givens and fellow soldiers were attacked while on a reconnaissance mission, according to a 2017 article in the TimesDaily.

A historical marker in Lauderdale County at Seven Points, which was where the Givens home was once located, recounts Homer’s heroic actions: “Following a bloody two-hour battle on November 1, 1917, Corporal Givens stood alone after his comrades had fallen. He then managed to kill three enemy soldiers before being severely wounded by twenty-three pieces of shrapnel.”

The Digital Archives gave more details: “Cpl. Givens’ men started back for the trenches but Cpl. Givens himself didn’t run, instead firing on the Germans, killing three instantly before he himself was hit (some accounts say it was by a German bomb) and rolled back into the large shell crater where he pretended to be dead. The Germans, assuming he was dead, left. Later a squad of American soldiers came out, discovered the wounded Cpl. Givens and carried him to a nearby field hospital.”

Givens spent weeks in a hospital overseas but residents of his hometown couldn’t wait to honor him. The Sunday, April 26, 1918, edition of the Times Daily announced that Red Cross officials would be delivering “the Cross of War (Croix de Guerre) bestowed upon 20-year-old Homer Givens for extraordinary bravery on the battle front in France.”

Read the entire article on the AL.com web site here: