To the fresh-faced and somewhat naive cadets at the University of Nebraska, he was “The Loot.” Some 25 years later, he was “The General” to battle-hardened officers of the American Expeditionary Force (AEF) at the end of World War I. His vision, initiative, talents and example provided the inspiration behind two time-honored organizations—the Pershing Rifles Group (PRG) and the Military Order of the World Wars (MOWW)—that, respectively, now celebrate their 125th and 100th anniversaries. 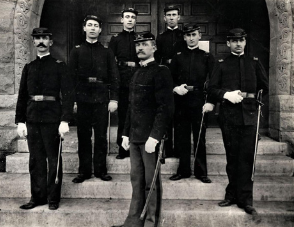 John J. Pershing (center) appears with his staff in 1892 at the University of Nebraska. Source: Lincoln JournalIf the fact that these two organizations inspired by the same man are simultaneously celebrating signature anniversaries is not noteworthy enough, the qualities of Pershing’s personality that imparted vision and inspiration to two very disparate groups some 25 years apart is compelling in and of itself. Indeed, hints of World War I’s General Pershing can be seen in 19th century’s Second Lieutenant Pershing.

As a young lieutenant, Pershing inspired the Nebraska cadets to evolve an elite drill unit into what became later known as the Pershing Rifles. Twenty-five years later, the now General Pershing provided the inspiration that led his AEF officers to establish The Military Order of the World War (MOW W) in 1919.

Notably, Pershing showed a knack for making something out of almost nothing. The cadet unit he inherited at Nebraska in 1891 was little more than a rag-tag group of mostly farm boys who endured military drill only because it was mandated for students attending land grant colleges.

On a far grander scale a quarter-century later, Pershing would grow an Army of barely 300,000 (including National Guard) into a force of some two million men while also finding ways to feed and clothe it, train it, and transport it before he could even think of fighting it—which he also did to great success. 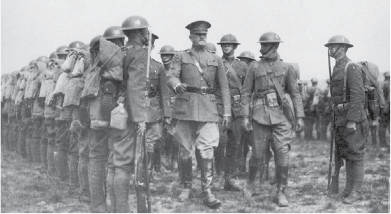 [May 20, 1919] General John J. Pershing inspecting troops of the 89th Division at Trier, Germany.Motivation among the Nebraska cadets was lacking. There were no standard uniforms, very little equipment and no provisions for earning an officer’s commission. That wouldn’t come until the Reserve Officer Training Corps (ROTC) was established in 1920. Much the same could be said about the nascent American Expeditionary Force.

However, in 1891 in Lincoln, NE, the newly-assigned lieutenant looked resplendent in his immaculately cared-for uniform. He walked ramrod straight, spoke clearly and directly, and barked his drill commands with precision. He led by example.

These qualities turned some heretofore indifferent heads. The lieutenant gradually got his cadets’ attention. They named him “The Loot.”

The General Pershing of 1917 hadn’t lost any of those qualities. His ability to clearly communicate his vision for organizing, training and sustaining the AEF, and his ability to quickly achieve results, also turned heads—on both sides of the Atlantic. In 1895, Nebraska Chancellor James H. Canfield described the special “something” Pershing had as a lieutenant at Nebraska that was to be much in evidence as an American general in France. Canfield wrote, “...by some spiritual quality, by a wordless, soundless something that radiated from him, he gradually turned the current and made it flow with him.” 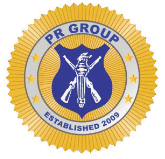 Next, Pershing showed personal initiative and a penchant for going well beyond what was expected—a lesson for us all, even today. Cadet uniforms at the time were locally produced and were of a questionable quality. Hardly impressed with the Nebraska uniforms, the Loot took the initiative to persuade the Army to issue regulation Army blues to the cadet corps, along with 65 Springfield rifles and 50 cavalry sabers.

Now that they at least looked like soldiers, the Nebraska cadets began to act like soldiers. Buttons and shoes were polished and uniforms were kept clean. Many cadets tried to pattern themselves after the Loot—to walk as he walked and to carry their shoulders as he carried his. The Loot was winning them over just as he later won over an American field army and skeptical Allied nations more than two decades later.

Part of General Pershing’s success as the AEF commander stemmed from his insistence on setting ambitious (some said unrealistic and even foolhardy) objectives during both the long logistical and organizational buildup and the forty-seven days of actual AEF combat. It was no different for Lieutenant Pershing. Now that his cadets at least looked like soldiers, the time had come to set lofty objectives and accomplish a seemingly impossible mission. 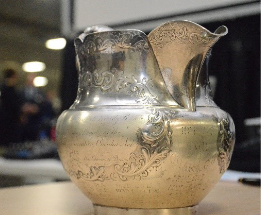 The Omaha CupThe objective the Loot set for the Nebraska cadets was to win a prize at the National Competitive Drills in Omaha, NE, in June 1892. The objective was ambitious, to say the least. In terms of popular interest and prestige, the National Competitive Drills were to college cadets what the Rose Bowl is to college football and “March Madness” is to college basketball. All of the best known and most accomplished drill units would be there: the Texas Tigers, the Washington Fusiliers, and even a team from the United States Military Academy. As was to be the case in France during WWI, many at Nebraska thought the objective of even entering the competition—let alone winning a prize—was unrealistic. However, the Loot thought otherwise, and the Loot prevailed. The Omaha Cup

The grand objective set for the AEF—with the fate of western Europe at stake—was to fight as an American army under American commanders and then to leave the trenches and carry the war into Germany. Many highly placed military and civilian officials decided that objective was unrealistic and foolhardy. However, the general thought otherwise, and the general prevailed.Another trait that set Pershing apart both at Nebraska and as the Commander of the AEF was his ability to find, develop and assign especially-talented officers to key positions not only on the AEF staff but also in the field. Some of those important AEF staff officers and field commanders would later become early MOWW Companions.

The same trait was evident in Nebraska. Although the size of the cadet corps had grown from 92 to 192 as the National Competitive Drills approached, Pershing personally knew every cadet in the battalion—to include their abilities and potential.

In fact, as he did on a much bigger stage years later, Pershing reorganized the Nebraska Corps of Cadets and assigned the best and brightest to Company A, which would represent the university in the upcoming national competition. Just as many early MOWW Companions had distinguished themselves in the AEF, several of the Company A cadets would go on to distinguish themselves as combat leaders in the Spanish American War, the Philippine Insurrection and World War I. 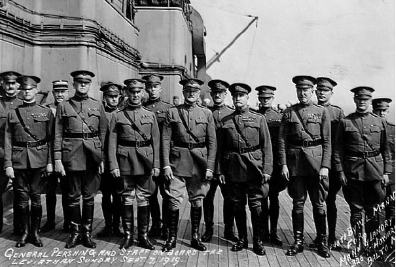 General Pershing with members of his staff.Back in Nebraska and now a first lieutenant but still the Loot, Pershing drove his handpicked cadet unit hard, just as he did the AEF during intensive training in the US and after its arrival in France. In Nebraska, Company A drilled from 0700 until classes started and from the end of classes until it was too dark to continue.

Perhaps the earliest example of Pershing’s innate ability to find the right officers for critical commands occurred when he tapped Cadet George Sheldon, Class of 1892, to command Company A. Tall and strong, Sheldon cut an imposing figure in his own right and led the company to a virtually perfect performance of exacting maneuvers before a large crowd that included several governors and prominent military and civilian leaders.

Company A was declared winner of the competition’s Maiden Category, which carried a $1,500 prize and an ornate sterling silver pitcher called the Omaha Cup, which is prominently displayed at the General John J. Pershing Boyhood Home State Historic Site more than a century later (https://mostateparks.com /park /gen-john-j-pershing-boyhood-home-state-historic-site).

Fast forward to France as the American buildup started in earnest. It would still be many months before the AEF would be combat-ready but combat readiness would never come unless the French ports could be organized and operated so that the near-continuous arrivals of thousands of US troops could quickly be disembarked and smoothly transported onward to their units or in-country training bases.

Logistical leadership largely fell to two early MOWW Companions, one of which was then-Brigadier General George H. Harries (The Officer Review®, May-June, 2019), who commanded the Port of Brest while Brigadier General Nathaniel F. McClure commanded the Port of St. Nazaire. General Harries, of course, became the first MOWW Commander-in-Chief (CINC) and served as such for an amazing six years. Still another early MOWW Companion who served in a critical logistical role was Brigadier General William E. Horton, who was the AEF Chief Quartermaster. 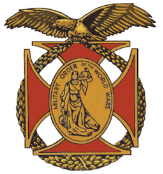 Harries’ successor as MOWW CINC was Major General Mark L. Hersey, who commanded both the 155th Infantry Brigade of the 78th Division and, later, the 4th Division during the climactic Meuse-Argonne Offensive of 1918.Meanwhile, Colonel William Hayward, an original Pershing Rifles member, commanded the African-American 369th Infantry, the fabled “Harlem Hellfighters,” which spent 191 days in combat and never lost a battle. At the same time, Colonel (later Brigadier General) Perry Miles, an early MOWW Companion, commanded the 371st Infantry—a sister regiment of the 369th—during ferocious fighting around Champagne. Both regiments had earlier been attached to a decimated French Army and fought with distinction.

With the Maiden Prize won by the Company A and the AEF victorious in The Great War decades later, the foundations for what would become the lasting legacies of both organizations had been laid down and remain firmly cemented to this day. The Pershing Rif les evolved from Company A to become the nation’s foremost military honor society for Army, Air Force and Navy ROTC cadets and midshipmen. MOWW became and remains the preeminent patriotic and educational organization dedicated to building future generations of young leaders shaped by the inspiration and experiences of its present and past Companions including, notably, Pershing. 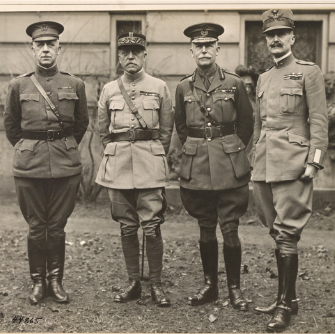 Members of the Allied Prison Commission, engaged in getting prisoners out of Germany. (L-R): BG George H. Harries; Brigadier General Charles DuPont (France); Major General Sir Spencer Ewart (Britain); Brigadier General Ugo Bassi (Italy). Source: National Archives Identifier (NAID) 55248492Not only do both organizations share a common founding vision and more than a century’s worth of service to the nation, both are also partnered in a Memorandum of Mutual Support that draws on the shared inspiration behind the two to enable each to contribute to the ongoing success of the other (The Officer Review®, Nov 2015).

For its part, MOWW supports by mentoring local Pershing Rifles cadet units, helping identify “lost” Pershing Rifles alumni who may be active MOWW Companions and, through its local chapters, providing a practical means of continuing the camaraderie and fellowship woven into the fabric of military and naval service.

To carry on this legacy of service, on 2 October 2019, the PRG established the John J. Pershing Memorial Foundation (JJPMF), a 501(c)3 nonprofit charity, to promote the ideals of selflessness, perseverance and devotion to duty. It also honors General Pershing’s legacy by furthering the development of leadership, academic scholarship and service of 11th and 12th grade high school students, with a primary focus on supporting at-risk and under-resourced youth. Brigadier General Arthur B. Morrill III, USAF (Ret), also MOWW’s Chief of Staff and Chief Operating Officer, is an inaugural foundation board member. In short, General Pershing’s legacy lives on today through members of the Pershing Rifles, the Military Order of the World Wars and the John J. Pershing Memorial Foundation.

As MOWW’s founding CINC, General Harries wrote, “... there [is] an increasing desire for fine comradeship, which will make double sure that foundation upon which we build shall be a great and powerful organization.” That worthy effort continues to today with the MOWW-PRG partnership, both jointly serving youth, community and nation. •

LTC Kevin M. Upton, USA (Ret) is a member of the Greater Boston Chapter (MA) of the Military Order of the World Wars.