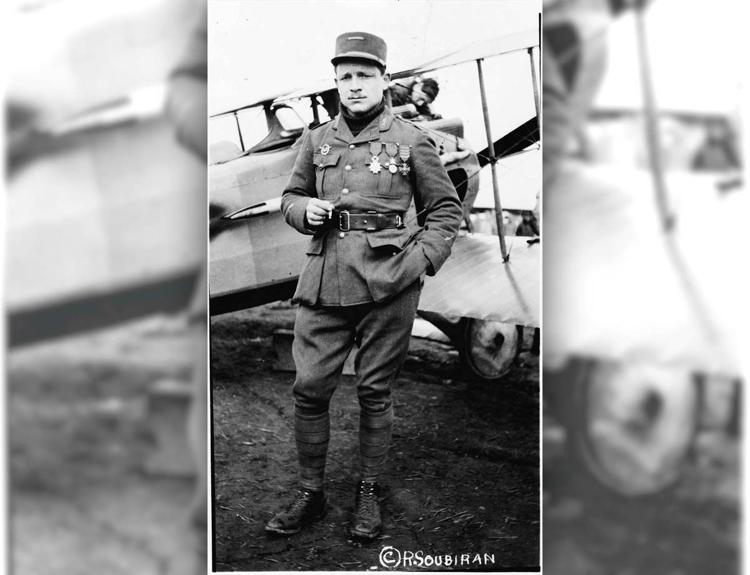 By Erik Ofgang
via the Connecticut Magazine web site

The giant enemy plane, a German reconnaissance craft, appeared early in the morning on May 19, 1918, in the skies above France. Several fighter pilots with the United States’ 94th Aero Squadron took to the air to fight it but proved little match for it.

“The scene, in full view for many miles, looked like a lot of swallows pecking at a giant bird of prey,” The New York Times reported.

After running out of bullets, one of the Americans landed and reported the obvious: they weren’t able to damage the heavily armored plane. Even so, one of the United States’ most experienced pilots decided to join the fight. His name was Raoul Lufbery and he was already a legend.

Officially hailing from Wallingford, though he never stayed in one place for long, Lufbery had served with France’s foreign service since the outbreak of World War I. In 1916 he joined the Lafayette Escadrille, a French command volunteer group of mostly American fighter pilots that was named in honor of the French hero of the American Revolution, Marquis de Lafayette. After the U.S. entered the war in 1917, Lufbery became the commanding officer of the 94th Aero Squadron.

Known as the “knights of the sky,” the fighter pilots of World War I were hailed for their bravery and grace. Lufbery embodied their devil-may-care spirit as much as anyone. He had already garnered 17 confirmed kills, with some modern observers putting his true tally closer to twice that number.

Lufbery steered his aircraft above the German plane and swept headfirst at the enemy craft, riddling it with bullets. Then he swerved off suddenly. Most likely his gun had jammed. In a few minutes, he attacked again. Contemporary accounts say that on this final pass, a thin line of flame shot from his plane. The craft seemed to hang in the air for a moment before darting downward, and as the plane fell, Lufbery jumped from it either to avoid a fiery death or in the desperate hope of landing in a nearby river. Other research suggests he was thrown from his plane when it capsized. Regardless, his body flew into the morning sky and started to fall.

Read the entire article on the Connecticut Magazine web site.