How the women of Orange County, NC stepped up to respond to WWI and the Spanish Flu

World War I called on the women of America to serve their country as best they could. But expected to be housewives and caretakers to their families, American women had lives that were far from independent. 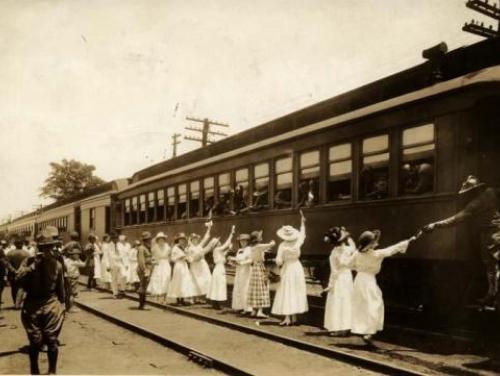 Women give World War I supplies (North Carolina Department of Natural and Cultural Resources)UNC history professor W. Fitzhugh Brundage said women were excluded from many roles before the war.

“Prior to the war, women weren’t allowed to vote except in certain states. Women moved through public space subject to very strict notions as to where women should and shouldn’t be,” he said. “They were virtually excluded from far more occupations than they were allowed to participate in.”

That is until the men went overseas, and the roles of women changed.

“During WWI, some of women’s organizational capacity was harnessed to the war effort,” Brundage said. “There were increases in employment for women. There were tens of thousands of women who went and worked in Europe and France as nurses.”

While Orange County is a tiny dot on a map of the world, its women worked hard and their efforts in WWI did not go unnoticed. Annie Sutton Cameron, who was born in 1896, wrote "A Record of the War Activities in Orange County, North Carolina" as a Hillsborough resident during the war.

In early February 1917, before the United States' entrance into WWI, K. J. Brown, a graduate nurse, formed a class in First Aid and Surgical Dressings. The class met bi-weekly for two hours for the entire spring, until the U.S. joined the war in April. Brown’s class developed into much more and eventually formed a Red Cross Chapter in June with 71 members.

The chapter shipped 44 cases of Red Cross supplies, including almost 19,000 gauze dressings and 9 cases of Belgian relief clothing. Its membership grew to 687 by October 1918.

Women also formed various war circles, in which they made hospital gowns, garments for refugees, bed pads and various medical supplies. These circles were the accessible alternative to Red Cross Chapters for rural women of Orange County who lived in more isolated areas.

Orange County was home to at least three women who saw active service with the Red Cross during the war, Cameron said in her book. Marion Williamson, Laura Hutchins and Jean Blue were stationed across the country to give aid to returning soldiers battling pneumonia, influenza or battle wounds.