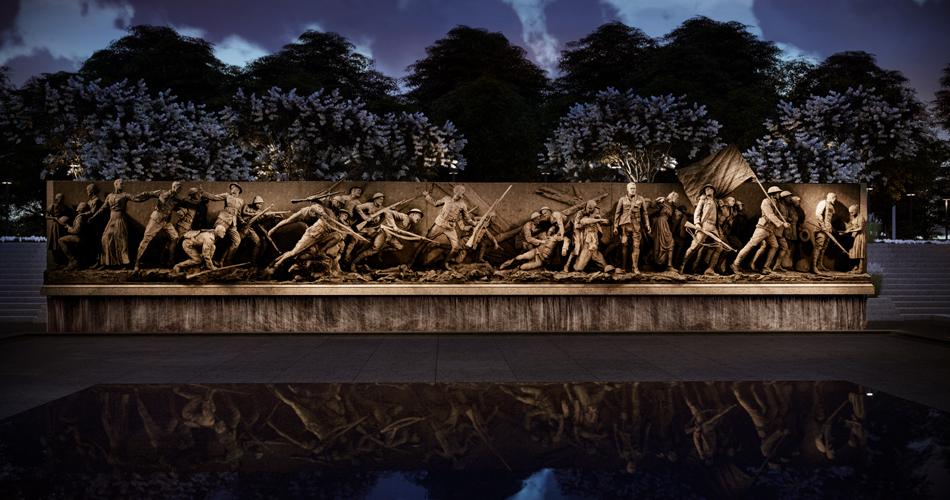 Artist's rendering of the new National World War I Memorial now under construction in Washington, DC. The National Society Daughters of the American Revolution has announced a $100,000 donation to the Memorial building Fund.

By Denise Doring VanBuren, President General
via the Daughters of the American Revolution web site

I am immensely proud to share that the NSDAR has become an official sponsor for the construction of the National World War I Memorial with a $100,000 donation. The monument is being built in Washington, D.C., in order to honor the heroism and sacrifice of the 4.7 million American sons and daughters who served during the conflict. Though more than 2 million Americans deployed overseas -- with 375,000 of them killed and 204,000 of them wounded -- World War I has been called “the forgotten war.”

Forgotten, that is, until now. The $40 million memorial is being constructed in Pershing Park at the corner of 14th Street and Pennsylvania Avenue by the U.S. World War I Centennial Commission, which was created by an Act of Congress in 2013. Members of the 12-member Commission were appointed by the President and Congressional leaders, and represent the American Legion, the Veterans of Foreign Wars and the National World War I Museum. All four living former Presidents serve as honorary chairmen.

Following a design competition, the commission selected "The Weight of Sacrifice," by Joseph Weishaar of Arkansas, as the massive and moving 80-foot long bas relief focal point of the memorial.  Ground was broken on the project in November 2017 and dedication is scheduled for November 2021.

In addition to constructing the memorial, the Commission’s purpose is to plan, develop and execute programs, projects and activities to commemorate World War I. The website contains a video simulation of the memorial and a wealth of information about the war, including informative videos that may be used for chapter programs, learn more here.  Individuals or chapters that would like to support the memorial may make checks payable to The Doughboy Foundation, and mail them to The Doughboy Foundation, Donation Dept., 701 Pennsylvania Avenue, NW  #123, Washington, DC  20004.

Supporting the Memorial’s construction also honors the memory of the Daughters who served with valor during this time. DAR Members established the War Relief Service Committee 103 years ago, on April 16, 1917, to organize their volunteer efforts, which ranged from knitting garments for soldiers to training for food conservation. Many DAR members were nurses serving in World War I, including Jane A. Delano who organized the Red Cross Nursing Service.

Read the entire article on the DAR web site.