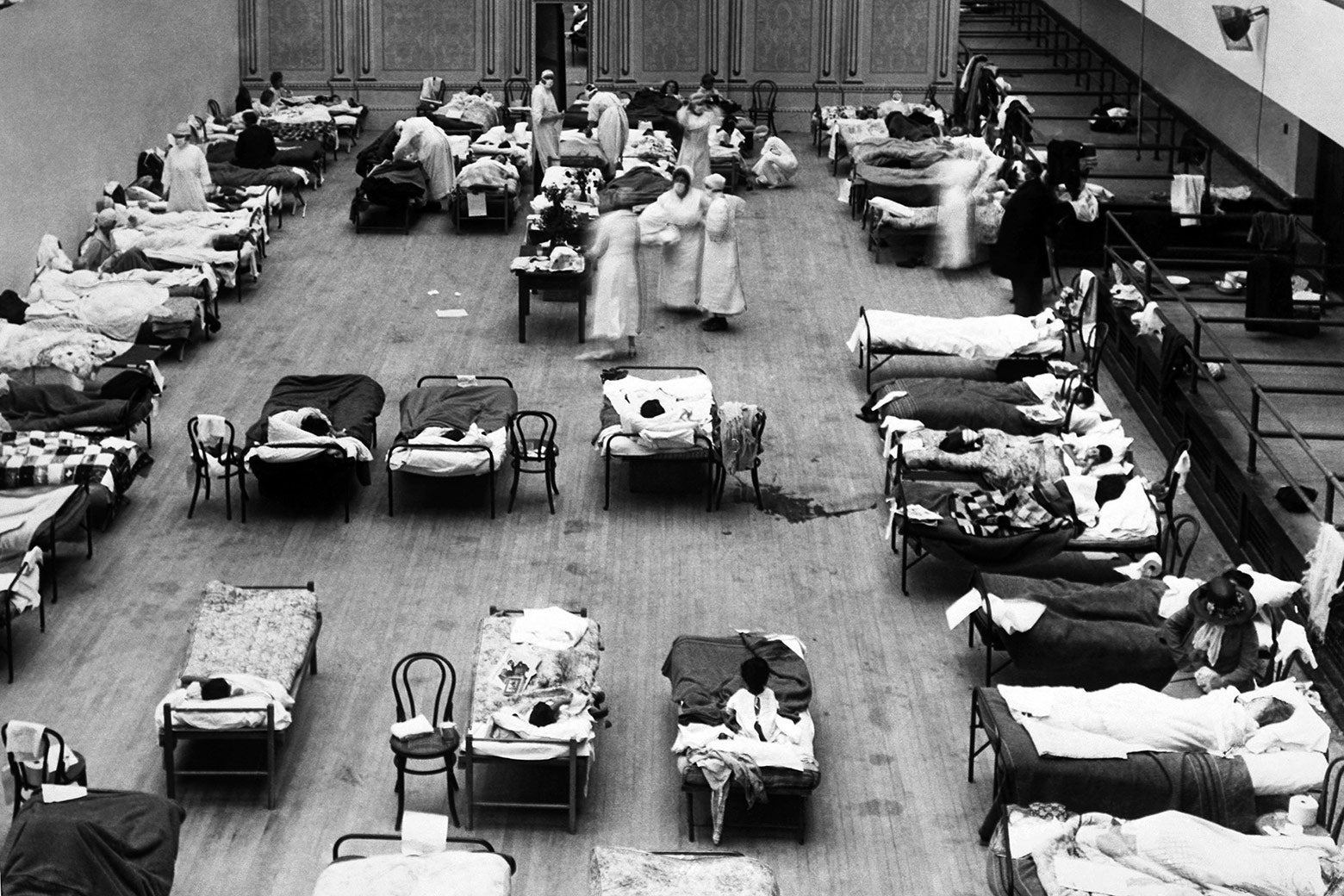 The Oakland Municipal Auditorium serves as a temporary hospital with volunteer nurses from the American Red Cross tending the sick there during the influenza pandemic of 1918, in Oakland, California.

The 1918 Flu Pandemic Killed Millions. So Why Does Its Cultural Memory Feel So Faint?

By Rebecca Onion
via the Slate web site

Last year, I wrote an anniversary piece about the “forgotten” 1918–19 flu pandemic, relying on the work of historians who’ve asked why such a huge event had so little effect on culture, policy, and public memory in the decades after that deadly flu strain burned itself out, leaving between 50 million and 100 million people dead. This year, as SARS-CoV-2 has forced the entire world into a terrifying and depressing alternate reality, I find this historical phenomenon even harder to understand. How could such a mind-bending, society-upending experience pass unremarked?

Enter Elizabeth Outka, a literary scholar whose fortuitously timed late-2019 book Viral Modernism: The Influenza Pandemic and Interwar Literature explains quite a bit. The book looks at the small group of authors who addressed the pandemic head-on in their work but also argues that the work of some of the greats—T.S. Eliot, Virginia Woolf, William Butler Yeats—was deeply affected by the flu in ways that aren’t so immediately obvious. Combining literary analysis with flu history and writing by flu survivors, Outka makes it clear that the pandemic wasn’t “forgotten”—it just went underground.

We spoke recently about the narrative impossibility of viruses, the mental health struggles of flu survivors, and the pervasive presence of something Outka calls “contagion guilt.” Our conversation has been edited and condensed for clarity.

Rebecca Onion: There’s this idea that the 1918–19 pandemic had no impact—that this big thing that killed so many people was, somehow, a cultural nothing. Your book takes a different approach. Sometimes you’re talking about the clear impact of the pandemic, in the case of authors like William Maxwell or Katherine Anne Porter, and sometimes you’re identifying something that’s a little more nebulous or subterranean—the pandemic’s shadowy influence on the work of famous modernist writers. How did you come upon the idea of approaching flu’s memory this way?

Elizabeth Outka: Out of necessity, really. Diseases are recorded differently by our minds than something like a war. By their nature, diseases are highly individual. Even in a pandemic situation, you’re fighting your own internal battle with the virus, and it’s individual to you. Many, many people in a pandemic situation may be fighting that same battle, but it’s strangely both individualized and widespread.

A pandemic’s enormous impact is just not necessarily one that’s recorded in the ways we expect history to be recorded. You can record the economic loss; you can count the bodies—though that can be difficult, too. You can study the science of the virus, but there’s a difficulty with making the loss visible.

Of course, that’s one of the reasons we have memorials to people who died in wars—to take something not quite tangible and turn it into something people can see. I think with diseases that can be difficult to do. Diseases often impact bodies in ways that are difficult to define. Viruses are invisible, contagion can often be tracked generally but not specifically. I think these are all things that feed into this.

It’s difficult to memorialize a pandemic, because disease makes people feel helpless, and there’s very little we can do to make meaning from it. With war, even if you disagree with the war, you could at least argue about whether the death was worth it. Did this sacrifice keep a soldier’s family safe? With an infectious disease, if you die, your family is more likely to die. There’s no sacrificial structure to build around a loss of this kind. It’s simply tragedy.

My specialty is literature, and literature is especially good at capturing these elements of disease that are difficult to represent. Our bodies’ perception of the world depends on the health of the body and the experiences of that body. There’s that sort of invisible, strange conversation that happens between the body and the mind. Literature can capture that.

Literature can also capture the way a loss of a loved one lives on in all those very small gestures … you turn around and no one is there as you’re brushing your teeth—all these small, terrible, but largely invisible losses, except to the individual.

Read the entire article on the Slate web site.