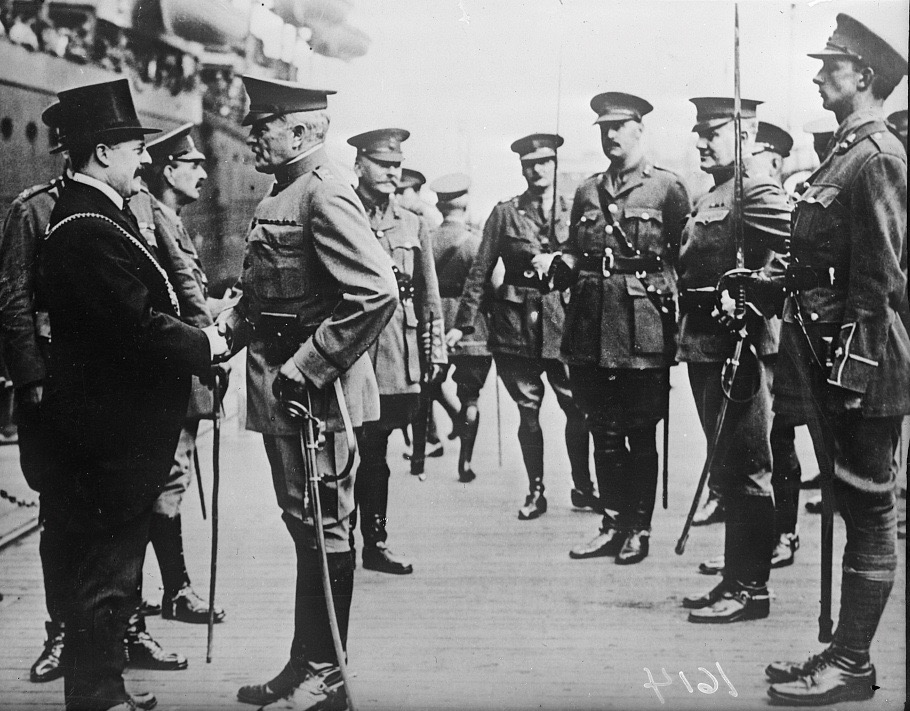 General John Pershing greeted by the mayor of Liverpool, taken on the morning on June 8, 1917 during his arrival in England.

Review: “The Conundrum of American Power in the Age of World War I”

As one would expect, the First World War centenary has been greeted with a mountain of publishing by many of the world’s military, diplomatic, and cultural historians, as well as a number of political scientists. A number of these works focus on individuals, specific battles, or particular aspects of war. As a result, authors are relying on ‘truths’ to convey the fundamental aspects of each nation's strengths and weaknesses.

An aspect that is all too often left to the side is that of Anglo-American relations. The term ‘special relationship,’ while not coined until the 1940s, has become so synonymous with Britain and the United States (U.S.) that it is often found lurking in the pages of history books dealing with two countries in the late 1800s and early 1900s. More importantly, but fundamentally linked, is the idea that the transfer of hegemonic power from Great Britain to the United States took place at the turn of the last century. In “The Conundrum of American Power in the Age of World War I,” Katherine Epstein does not avoid this problem, she confronts it head-on.

Epstein states that her goal is to “build bridges between the ‘hard’ and ‘soft’ power scholarly approaches”. In a world where scholars are increasingly shielding themselves within their academic silos, this is a much-needed wake-up call. One problem that arises is that while the author makes many good points about the need to expand methodology and pair cultural history with ‘traditional’ history, the argument seems to be aimed more at those traditionalists who believe that the U.S. took the reins of global power from Britain somewhere between 1898 and 1918. This is not necessarily wrong, but if the idea is to build bridges between scholarly approaches, it would seem that each side would be guilty of staying in its respective lane.

Nevertheless, Epstein’s arguments are good ones. She rightly points out that globalization and industrialization are not the same thing, and that in order to understand the sinews of the United States' rise to global predominance, it is essential to distinguish not just between the two, but between their strengths and weaknesses. This is the article’s strength. Epstein’s analysis of how Britain remained great is sharp and takes into account several facets of empire and economy which demonstrate America's continued reliance on the British Empire's infrastructure in 1918. For instance, the author points out that the U.S. Navy was reliant on British dry docks and coaling stations to support the Great White Fleet’s world tour. Another example of American dependence is the need for British marine insurance and reinsurance for the U.S. Merchant Marine and the lack of a global communications grid.