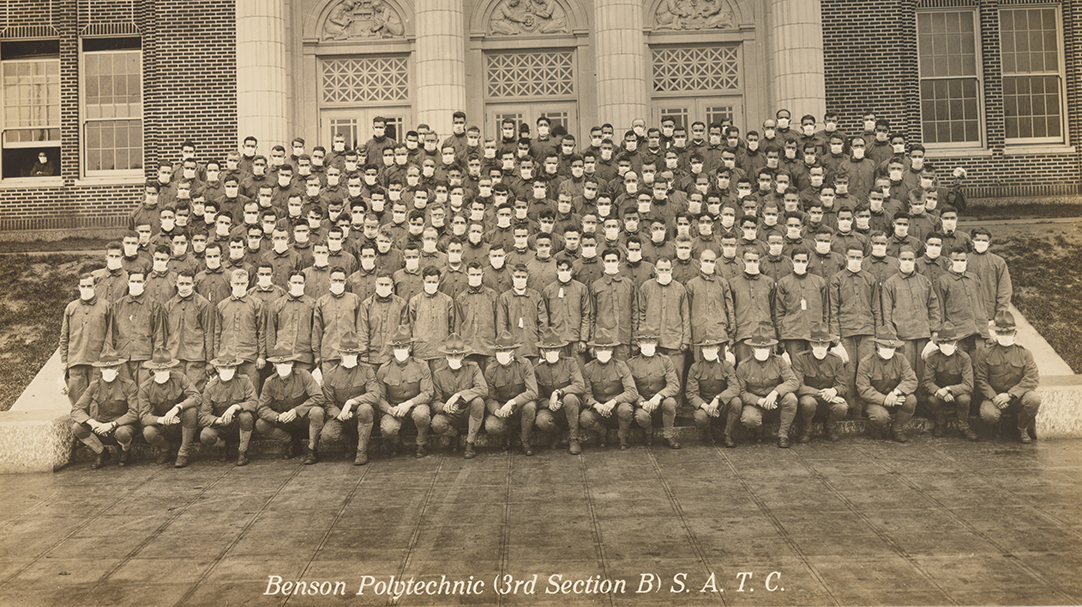 On October 8, 1918, the “Oregonian” reported on four cases of influenza and “six other of suspicious character” at Benson Polytechnic School in Portland, Oregon. This first outbreak in the city prompted the school to put its 300 Student Army Training Corps (S.A.T.C.) students in quarantine. Members of the Benson Polytechnic S.A.T.C third section in this photograph are wearing masks on October 27, 1918.

From Whence Did it Come and to Where Did it Go?: The 1918 Influenza Pandemic in Oregon

By Erin Brasell
via the Oregon Historical Society web site

In a Spring 1963 Oregon Historical Quarterly article, “The 1918 ‘Spanish Influenza’ Pandemic in Oregon,” author Ivan M. Woolley opens with a question: “From whence did it come and to where did it go?” This question about plagues and pandemics, Woolley argues, is one that scientists and historians have pondered for ages. Woolley cites examples of pandemics that are well documented throughout history: an onslaught described by Hippocrates in 412 B.C.E. that destroyed an Athenian army, the Black Death of the fifteenth century, and the 1918 “Spanish” influenza pandemic, which infected twenty to thirty percent of the world’s population and resulted in 50 million deaths worldwide — about 675,000 of them Americans. The Oregon State Board of Health listed 48,146 cases of the virus between October 1, 1918, and September 30, 1920, and 3,675 resulting deaths.

As we all practice physical distancing and wait for stay-at-home orders to ease, public health experts warn that moving too quickly could have serious implications in terms of the disease’s spread — and resulting deaths. Historians are well positioned to echo these warnings, especially when analyzing the 1918 influenza pandemic (which occurred during World War I) and Oregon’s response to COVID-19. Historical context matters, and you’re in luck! Making relevant connections to history is one of the Oregon Historical Society’s specialties, and we’ve even created an illustrated timeline* to assist.

The Summer 2017 issue of the Oregon Historical Quarterly features a special section, “World War One Centennial Roundtable,” which is an excellent resource for that historical context. This virtual roundtable includes an introduction by Dr. Kimberly Jensen and Dr. Christopher McKnight Nichols and six essays shedding light on the “many complex questions and changes to Oregon and the nation” during that period. The articles show that the 1918 influenza pandemic and response did not develop in a vacuum; those events were among a series of World War I-era “conversations” about citizenship, suffrage, surveillance, the definition of Americanism (and who could identify as such), and the country’s response to turbulent times.